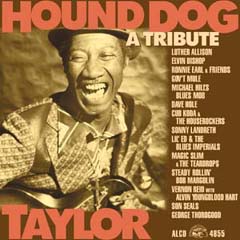 Special thanks above all to Wesley Race (who talked me into it), and to Bob Koester, Peter Amft, Jim deJong, Bea Van Geffen, Jan Loveland, Sandy and Joyce Sutherland, Roy Filson, Dick Waterman, Greg Colbert, the Garcia Brothers, Kit Rachlis, Jeff Boutwell, Jim Litke, Mordesz, Florence and everyone at Florence's Lounge, and all of you who never forgot.

All net profits from this recording will be shared between Hound Dog's widow, Fredda Horne and The Blues Community Foundation, a not-for-profit organization which provides emergency assistance for blues musicians and supports blues education programs. Further donations to the Blues Community Foundation may be sent to Box 607698, Chicago, IL 60660.

He was never really a star, not even in the blues world. He wasn't famous like B.B. or Albert King, Bobby Bland or his fellow Chicagoans Muddy Waters and Howlin' Wolf. He didn't have hit singles on R&B radio in the '50s, just a couple of local 45s that were on a few South Side juke boxes. He wasn't sought out and patronized by visiting English rockers in the '60s, or deified as a living legend in the '70s.

For almost thirty years, Hound Dog Taylor and his HouseRockers played totally raw bar blues in the totally raw blues bars of Chicago's South and West Sides, making joyous music for neighborhood crowds, playing for audiences where he knew everyone and everyone knew him. It was music born (like Hound Dog) in the Mississippi Delta, electrified in Chicago's Maxwell Street Market, and designed to make people happy, either by getting their bodies moving or by immersing them in the cauldron of deep blues until the pain just soaked out of them. Hound Dog played five or six nights a week, working cheaper than any other band in town, often for ten or fifteen dollars a man. Hound Dog was a Chicago institution, beloved by fans and fellow bluesmen alike. As he said, "Everybody knows The Hound!"

Hound Dog and the HouseRockers were throwbacks to an earlier era. They played with no bass, just two guitars and a drumset, with Hound Dog and Brewer Phillips trading the bass and lead lines. Their music was scarily simple, usually played in only one or two keys (mostly one that vaguely resembled E; there were no tuners in those days). Sometimes it was just about a hypnotic, sweaty, ultra-danceable, no-changes groove, like John Lee Hooker or Howlin' Wolf. He'd introduce these rocking boogies by instructing the band -- "I know everyone took a shower today, but baby, let's get funky!" Other times it was the deepest bottleneck blues, visited by the ghosts of Elmore James and Tampa Red. As far as Hound Dog was concerned, he played two kinds of music. The slow ones were blues, the fast ones were rock 'n' roll.

Only in the last four years of Hound Dog's career did he emerge from the Chicago ghetto to play for a world audience. After the release of his debut album, Hound Dog Taylor and The HouseRockers, in 1971, he found a new audience on college campuses, at the rare blues festivals (especially the pioneering Ann Arbor Blues Festival), and in bars in cities like Cambridge, Kent, Des Moines and Milwaukee that catered to what can only be called hippies. With the release of his second album, Natural Boogie, he earned a tour of Australia with Freddie King, a single concert opening slot with B.B. (one of the thrills of his life) and his first New York concert appearances, with Big Mama Thornton and Muddy Waters. He had visited Europe once, as part of a package tour in the '60s, but never had a chance to travel there with his own HouseRockers.

Even after he began playing on the road, Hound Dog's show never changed. If there was an audience, even a tiny one, he was ready to play all night. "Let's have some fun!," he'd holler. He sat perched on his folding chair, brass-lined steel slide jammed on the fifth of the six fingers on his left hand, attacking his ultra-cheap Japanese guitar, head thrown back, stomping out his raucous boogie and deep blues with both feet moving, barking out his lyrics and making sure the groove never ceased. His partners in crime, guitarist Brewer Phillips and drummer Ted Harvey, were as much a part of the show as he was. Phillips, his guitar strung around his neck like a necklace, shirt tail out, would dance across the stage and through the audience, throwing his leg in the air as he squeezed off high notes and grinning his crooked-toothed grin. Ted would holler encouragement while keeping time on the wad of gum in his mouth. They would play for hours, with no set list, talking trash about each other on the microphone and making sure the audience never stopped moving. Hound Dog would tell incomprehensible jokes, laughing hysterically and burying his face in his hand, while Phillips would re-introduce Hound Dog over and over in his cracked voice -- "Hound Dog Taylor ... the one and only ... Hound Dog Taylor." Whether they were playing at one of the innumerable ghetto taverns or in a college concert, they'd play until closing time or until the dancers dropped from exhaustion and drink.

From 1971 until 1975, Hound Dog played over much of the U.S.A., but he always happily returned to his Chicago clubs and old neighorhood. 1975 was a tough year; his long-time friendly rivalry with Brewer Phillips got serious, and a shooting followed. Phillips wasn't badly hurt, but insisted on pressing charges. While awaiting his trial, Hound Dog gigged with other second guitarists, like Lefty Dizz and Left Hand Frank, until he was hospitalized in September, diagnosed with lung cancer. It wasn't until December that Phillips came to visit him, and they made up. Within two days, Hound Dog was dead. He was 59.

He never dreamed that his music and his legacy would live on as they have. His four Alligator albums have become raw classics. His music has been carried on by his old friends like Magic Slim and the Teardrops (Hound Dog's favorite band; they replaced him at Florence's Lounge when the Dog went on the road), Elvin Bishop (a teenage Hound Dog sideman), Son Seals (an occasional HouseRocker) and Luther Allison (whose untimely death paralleled Hound Dog's). George Thorogood used to be Hound Dog's roadie/opening act when Hound Dog toured New England. Bob Margolin and Ronnie Earl were both members of Hound Dog's Boston audiences. On the other hand, Michael Hill, Dave Hole, Vernon Reid, Sonny Landreth and Gov't Mule know Hound Dog only from his records, but as bluesmen and rockers carrying the music forward into the 21st century, they absorbed him into their roots. Oddly, Lil' Ed, though a fellow Chicagoan, never knew Hound Dog, but learned his music from Taylor's friend and slide "rival," J.B. Hutto. Cub Koda was the writer of one of Hound Dog's favorite rock tunes, Smokin' In The Boys Room, and after Hound Dog's death, toured with Brewer Phillips and Ted Harvey, who joined him for this recording. And elsewhere in the world, Hound Dog's music has been preserved by bands like Sweden's Hjalmar Kings and the extraordinary Boogie Boy Ikuto, who, though he speaks no English, almost perfectly reproduces the instrumental and vocal raunch of The Dog on his home made Japanese albums.

When I remember Hound Dog, grinning and sweaty on the bandstand, his long, gaunt frame squeezing out every drop of emotion from his music, his words (and his laugh) come back to me like it was last night. He'd say over and over to his fans, "I'm with you, baby! I'm with you!" And one night, at the end of a particularly wild show, he said to me, "When I die, they'll say 'he couldn't play shit, but he sure made it sound good!'" 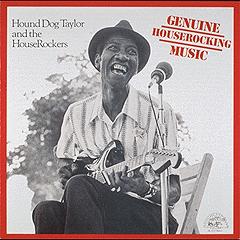 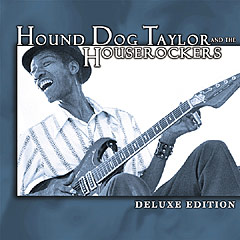 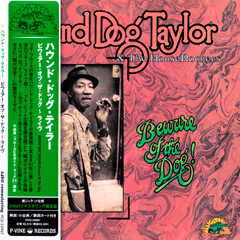 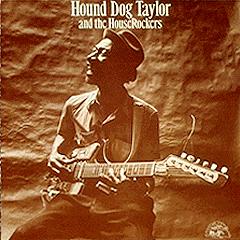 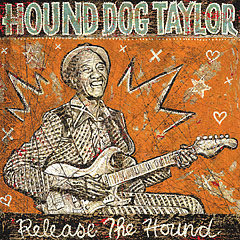 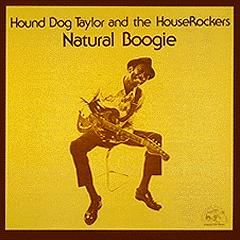