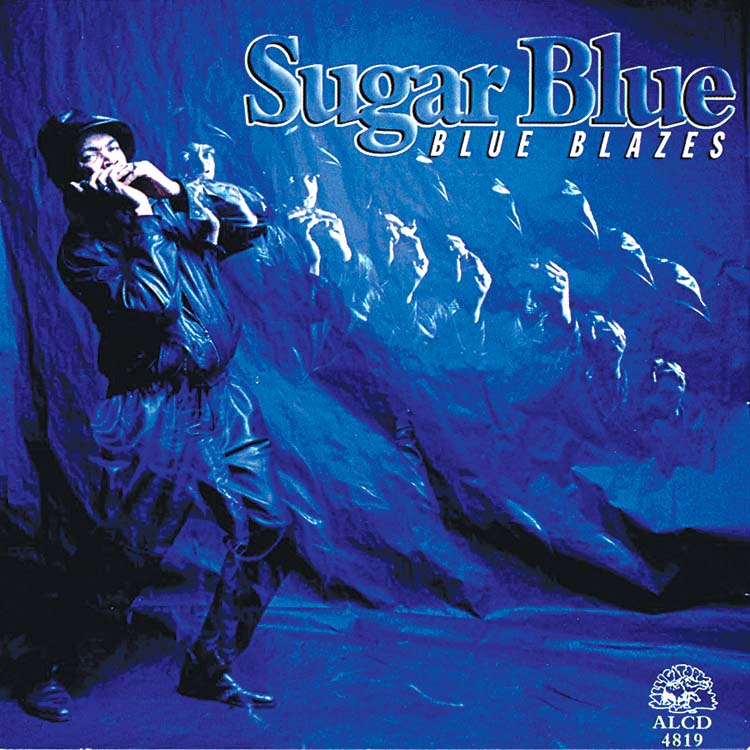 Pyrotechnic harmonica genius who's recorded with Willie Dixon and The Rolling Stones. "Incendiary virtuosity...a musician who transcends the limitations of his instrument"--CHICAGO TRIBUNE "****"--DOWN BEAT

Miss You Arranged by Sugar Blue and Rico McFarland

How Does He Do That?

If you've ever seen Sugar Blue perform -- and count yourself fortunate if you have -- you've no doubt asked yourself that question, oh, every five seconds or so during one of Blue's extraordinary harmonica solos. And if you've looked around the room, you've seen that same question reflected in the dropped jaws and shaking heads of everybody else, nigh-disbelief registering in all those faces as he lets rip another quicksilver run of impossibly pure harp notes. If you've never seen or heard Blue, rest assured that a minute or two into this disc -- his first solo record in twelve years -- you'll be picking up your own lower mandible off the floor, marveling, "How does he do that?"

What's also striking about Blue is that, in blues terms, he's a relatively young guy. Born James Whiting 44 years ago in New York City, the future Sugar Blue (who took his name from jazz saxman Sidney Bechet's Sugar Blues ) was reared in Harlem, where his mother was a singer and dancer at the fabled Apollo Theatre. An early ambition for the priesthood (of all things) was derailed forever when this strictly-raised Catholic kid first attended his grandma's Baptist Sunday service. Blue's reaction? "Shit! Now this is church!" An instant gospel fan, he next heard Ray Charles, "and it was all over."

Blue received his first harmonica -- a gift from one of his aunts -- at age ten. By his teens, he was performing around Greenwich Village as a street musician. His first vinyl outing was an appearance on 1975's Stars Of The Streets (Blue Whale Records) followed by guest stints on waxings by grand old bluesmen Roosevelt Sykes and Brownie McGhee that same year. A record with Johnny Shines and appearances on a trio of albums compiled by Victoria Spivey (on her Spivey Records label) followed, but Blue was itching to break new ground. So, he expatriated to France on the advice of legendary blues pianist Memphis Slim, who reasoned, "I know it worked out for me, and it didn't hurt Sonny Boy Williamson none."

It was in Paris that Blue snared his highest-profile gig to date. Jamming at a party one night, he was approached by a movie-biz type who claimed to know Mick Jagger and urged Blue to contact the Rolling Stones' singer at his Paris residence. "I said, 'Mick Jagger plays harp already,'" Blue recalls. "The guy replied, 'He doesn't play harp like that.' He gave me Jagger's phone number, but I thought he was joking." The number was real, though, and Blue ended up appearing with the Stones on their watershed 1978 album Some Girls (as well as follow-ups Emotional Rescue and Tattoo You). Blue's harmonica riff defined the Stones' smash Miss You, and his dizzying solo had rock fans everywhere wondering, "Who is this guy?"

He came back to the U.S. in 1981, again at the suggestion of Memphis Slim. "Go to Chicago," he told Blue. "Learn your trade. Pay your dues." "It made all the sense in the world to me," says Blue, who headed for the Windy City to learn from the harp masters -- Big Walter Horton, Carey Bell, James Cotton, Junior Wells. He's stayed in Chicago ever since.

While major stardom has remained elusive, Blue has piled up some impressive credits over the years. There's the 1985 Grammy he won for his contribution to the Montreux Festival live album Blues Explosion. There are his last solo albums, the acclaimed 1980 release Cross Road and 1982's Chicago To Paris (both released on the French label Blue Silver). There's his two-year stint with the late blues master Willie Dixon's Chicago Blues All-Stars and appearances on Dixon's 1989 album Hidden Charms (also a Grammy winner) and 1985 LP Live/Backstage Access. He's popped up on the silver screen from time to time, including a cameo in Alan Parker's atmospheric thriller Angel Heart. Blue also got to appear with boyhood idol Ray Charles on the Cinemax special Fats Domino and Friends. He's performed with a broad spectrum of artists: jazz greats like Stan Getz, Archie Shepp, Art Blakey and Lionel Hampton; rock innovators Bob Dylan and Frank Zappa; blues legends Dixon, Muddy Waters, B.B. King and Louisiana Red -- even David Letterman's bandleader Paul Schaffer on his 1989 album Coast To Coast.

In the process, Blue has developed a harp style like no other, a technically dazzling yet wholly soulful employment of the harmonica that takes the instrument where few, if any, have gone before. Small wonder that the man's been compared to innovators like Charlie Parker, Miles Davis and Little Walter.

Blue's wide-ranging resume has helped season the unique blend of blues, jazz, R&B and rock 'n' roll he himself terms "progressive blues." But make no mistake. This is the blues. "It's music for people that have gone through some changes, that have seen some livin'," says Blue. "You can have instant music," Blue goes on, "but it's gonna sound like it. You might be able to drink instant coffee in the morning, but God knows you don't want it after dinner. You have to take the time to sit down and brew this stuff."

With Blue Blazes, Sugar Blue has brewed up a concoction that's rich, flavorful and potent. "I blew my heart out," he says simply. "With this record, I said, 'This is gonna be a harmonica album.'"

And, caramba, does he blow. One moment, Blue's harp is bearing down like a locomotive. The next, it's all silvery raindrops dancing on a hot sidewalk. His solos spin tales, paint pictures. He takes you out there, way out; then always brings you back again safely. As for Blue's signature sound - those warp-speed, crystalline runs in the harmonica's rarely-used upper register - he can, in a way, tell you "How He Does It."

"One day I said, 'Wait a minute. There's half the instrument that almost nobody's using. There's about eight notes up there, and hardly anybody plays 'em. Why not?'" Blue soon found out. "It was a bitch. The layout of the notes changes over up there, so the ones you're blowing here, you're drawing there. Not too many people really mess around up there. 'Cause it's not easy." But oh, is it glorious. Listen yourself, and just see if Sugar Blue doesn't redefine what you thought a mouth harp could do. On Blue Blazes, Blue makes a substantial nod in the direction of traditional blues, but does so in his own inimitable way. There's his horn-jazzed, uptown version of Willie Dixon's classic Back Door Man, for instance, in which he does that only-Blue-knows-how trick of sustaining a high note while chords chug underneath. Then there's Blue's smoldering Muddy Waters cover, Just To Be With You, which highlights his voice - did I mention the guy can sing? Blue's distinctive throat can tend to be overlooked in the face of his instrumental virtuosity. It's a sensual voice, with a whisper of huskiness and, in the upper register, a note of erotic yearning, an alley-cat-in-heat quality.

On the contemporary side of Blue Blazes, there's an utterly transformed version of Miss You, a funked-up, warmed-up interpretation that puts Mick Jagger's excessively mannered original performance to shame. And there's a striking pair of originals by Blue and his longtime guitarist Motoaki Makino, the unabashedly romantic Country Blues and its cynical flip side, Out Till Dawn.

Listen to Blue Blazes, and know that the man you are hearing is a man with a mission. "Harmonica has been locked up and strangled into a musical space that really galls me," says Sugar Blue. "It has as much power and potential as any lead instrument. But it takes some harp heroes, man! So I'm goin' for it."

Moira McCormick is the Midwest Editor of Billboard and a contributor to Rolling Stone and Musician and other magazines. 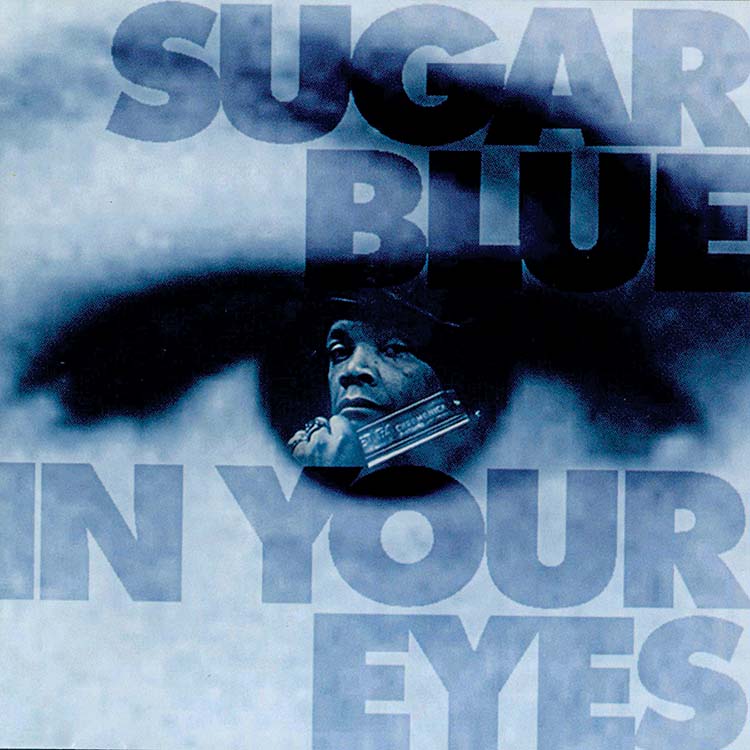 Sugar Blue
In Your Eyes