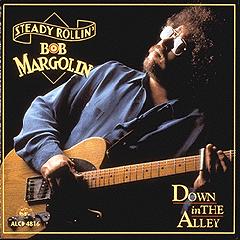 Down In The Alley

Special thanks to my family for their love and support and to Nelson Penninger for the years he booked me.

This album is dedicated to the memory of Muddy Waters and Luther Tucker for their friendship and inspiration.

For the past thirteen years, guitarist Bob Margolin has been tearing it up at nightclubs and concert halls around the world. He does so by making '50s-style blues speak to '90s audiences. "I love playing the real old-time blues," Bob says, "because it's the most exciting, honest music I ever heard." To say the least, Bob has acquired his '50s finesse honestly. He learned directly from the great Muddy Waters.

"It was a real honor and a thrill," Margolin recalls, "when MuddyWaters asked me to join his band. For a blues lover like me, that was the opportunity of a lifetime." Bob worked with Muddy for seven years, accompanying him on nine albums, and appearing alongside him in the film The Last Waltz.  Margolin headed out on his own in 1980, and he's been on the road ever since, appearing with the likes of Etta James, John Lee Hooker, Stevie Ray Vaughan and Johnny Winter. Down In The Alley reflects all of Margolin's hard work as a student at Muddy Waters' "old school."  It also shows how Bob has carved his own niche as both a searing yet subtle guitarist and a witty, distinctive songwriter.

Margolin grew up in Brookline, Massachusetts, just outside of Boston. In the early '70s he was working there on a six-set-per-night gig with blues guitarist Luther "Georgia Boy" "Snake" Johnson -- a Muddy Waters alumnus who introduced Bob to the man himself. Then in 1973 Bob helped form the Boston Blues Band, a group which often opened the show at Muddy's Boston-area performances. Muddy heard Bob play and was impressed with his dedication to the classic '50s Chicago sound. Shortly thereafter some personnel changes in Muddy's band created the need for a guitarist -- and Bob Margolin was the right man in the right place at the right time."Muddy's drummer, Willie 'Big Eyes' Smith, told me 'welcome to the club,' " Bob remembers, "and that gave me a great feeling. It was more than just a gig and a paycheck, though. It was an opportunity to learn. Muddy didn't want to take the time to actually teach me his sound, but he could see how much I wanted to get it right. So he put me next to him on the bandstand and hoped I would pick it up. He did tell me about his 'delay time,' and 'tone,' and the 'send back,' and not to be 'short-cuttin' on the turn-around.' It was a big mystery at first, and Muddy was not exactly Mr. Sensitive Tact with his criticism, and it did 'hurt like being in love,' as he said it would.  But I don't complain, because I love Muddy's blues and I'm blessed with the chance I had to play with him."

Bob's love of vintage Chicago blues doesn't mean that he's a dry, academic revivalist; his hard-driving style is as fun, funky and danceable as they come -- you don't play 200 club dates a year by giving seminars. It's just that Margolin approaches music with an unadorned, "less-is-more" concept. His gutsy guitar style touches on blues, rock, jump and swing and seamlessly unifies them with the "delay-time" rhythm which makes a good blues so sensual. Bob sets the same high standards for his band members -- admonishing drummers, for instance, to keep a strong, simple back-beat and not play "a lot of candy-ass rolls." There's good reason for such vigilance, since today's Chicago blues is saturated by modern funk. The fancy drum fills and thumb-popping bass lines of this contemporary approach -- effective as they can be in their own right -- might well make Muddy spin in his grave.

But he'd love the rollicking, soulful and personable set that Bob has put together here -- from the exquisite guitar work on Brown Liquor to the slide wizardry of the title track, the lyrical fun of Boston Driving Blues, and the ferocious band groove on Boogie At Midnight . "This album," Bob concludes, "is a combination of Muddy's legacy, some personal favorites, and my own songs. All the songs are blues, in many different shades. I recorded them with some of my old friends, and every story is true."

-- Ben Sandmel
Ben Sandmel is a New Orleans-based journalist and folklore researcher. His articles have appeared in the Atlantic Monthly, Esquire, and Rolling Stone. Check him out on the Hackberry Ramblers' Cajun Boogie on Flying Fish Records. 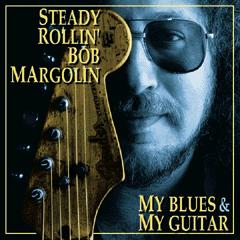 Bob Margolin
My Blues & My Guitar 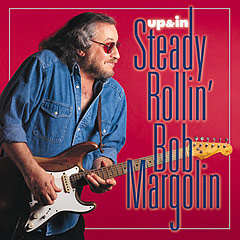 Bob Margolin
Up And In