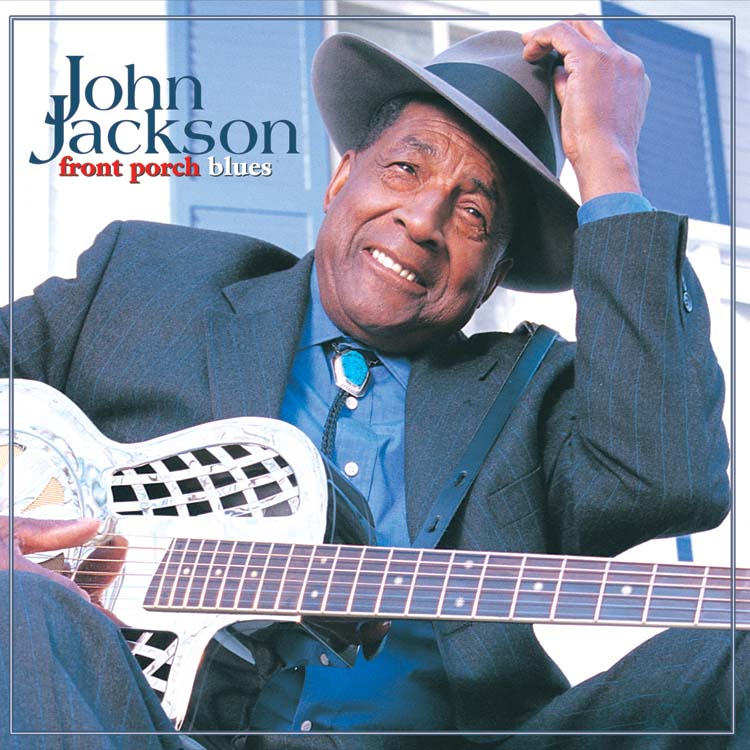 Acoustic guitar and vocals from a national treasure. The 75 year-old Jackson plays with the depth of someone who has lived the blues. "Delightful music by a fingerpicking country blues and ragtime guitar master"--WASHINGTON POST

John Jackson was born and reared in Woodville, Rappahannock County, Virginia, where the green rolling hills of the Piedmont join the smoky vistas of the northern Blue Ridge.
There the Rappahannock River begins a tumbling meander to the great bay of the Chesapeake. Older residents may have a polysyllabic musical lilt in their speech. John Jackson's family lived there before the Civil War.

His father, Suttee Jackson, was a musical tenant farmer who performed on a $4.98 guitar and on mandolin, homemade fife and banjo. His mother, Hattie Roberta Haney, was a singer with a strong, clear voice. John learned songs from both parents, but not much guitar from his father. "He was left-handed, played upside down and backwards."

Suttee Jackson and his brothers had a dance band that performed in the ancient black string band style on fiddle, banjo and two guitars. This is a musical form much older than the blues, one that can be traced in Virginia to the early Colonial period when the combining of the African banjo and European fiddle created the first American musical ensemble.

John recalls the rhythmic force of that band as his father and uncles performed such tunes as Walk Down The Devil's Stairs at country dances.

Another family string band, composed of his mother's cousins, was the house band at the famous Panorama Hotel at the summit of the Blue Ridge.

Two of John's older brothers and a sister learned to play blues on Suttee Jackson's $4.98 guitar. Jack and Dick performed in and around Woodville, and Alice, two years older than John, enjoyed playing guitar for her little brother.

John became serious about music at age five after his sister Mary "Tee" Jackson made enough money "taking in washing" to buy him a $3.75 mail order guitar. That guitar came to a bad end a few years later when brother Jack borrowed it for a house party job and had to use it to defend himself when a brawl erupted.

Left without an instrument, John went visiting his mother's sister who had married a banjo-picking Indian in nearby Flint Hill. John still plays some tunes on banjo learned during that portion of his childhood.

At age 25, John moved his young family to Fairfax County, Virginia, near the growing suburbs of Washington, D.C. He took a job on a dairy farm and built a house for his family with his own hands, working evenings and weekends. He dug graves with pick and shovel and did work as a handyman, eventually creating his own small business which he still operates with his son James.

John was holding forth on his guitar at a Fairfax Amoco station in 1964 when guitarist and noted folklorist Dr. Charles L. "Chuck" Perdue stopped by. The Jackson and Perdue families became instant friends. Chuck and Nan Perdue introduced John to the thriving blues revival of the '60s and the Ontario Club in Washington, D.C. where the heroes of the blues performed.

Mississippi John Hurt and Skip James literally lived at the Ontario for a time. John became friends with them and also met and performed with the Rev. Gary Davis, Victoria Spivey, Son House, Furry Lewis, and Big Joe Williams. Sam Chatmon and Buddy Moss stayed with the Jacksons when performing in the area. John enjoyed the good company, but he continued to play in the style he had developed as a boy in Rappahannock County.

A favorite of President and Mrs. Carter, John performed a memorable concert for them on the White House lawn. He was the bluesman on the tour of Southern Music USA, a globe-trotting event that set a distance record for international touring (47,000 miles in eight weeks). He has performed for the Royal Family in Thailand and in many of the great halls in Europe and North and South America.

In 1986 the National Endowment for the Arts gave John its National Heritage Fellowship, a "living treasure" award, the highest honor the nation offers a traditional artist.

The most gentle and good hearted of men, John tends to become embarrassed when paid a compliment. He loves children and talks to them with an unwavering attention and focus that leads them to instantly accept him as a friend who should be taken into their confidence. He remembers names, hugs, friends, and is a careful listener. A lifetime of hard work has made him physically powerful, and his handshake has vigor and strength. His eyes turn misty if a departed friend or family member is mentioned.

John is proud that his son James has taken up the family business--including the blues part of it. He insisted that James sing the last song on this recording.

Music, work, friends and family are inseparable in John's world. They give pleasure, sustenance and a sense of place. John has traveled far, but his values reflect a Woodville of long ago and a tradition of music kept in the generations of a family.

During the 1990s John increased his touring: "I've always liked playing for people; I have more time for it now, and I'm tickled that people want to see me."

John is especially grateful to his old friends, the Perdues, and to the "blues people" he has met. "Chuck and Nan introduced me to some awfully nice people," he said. "Blues people have a very good heart and I hope you get to meet as many of them as I have."
--Joe Wilson
Joe Wilson is Executive Director of the National Council for the Traditional Arts and was John's roommate on the Southern Music USA tour.

John's comments about the songs:

1 Railroad Bill
Trad., arr. by Jackson, Eyeball Music, BMI
I learned that from my father. He had some stories about Bill robbing trains. I've heard other people do that song, but my father's was different.

2 C.C. Rider
Traditional
I got that one from a lot of people. I heard friends play it and several recordings of it and one day I knew it. You can say I owe everyone that ever did that song.

3 Death Don't Have No Mercy
Davis, Chandos Music, ASCAP
My old friend the Reverend Gary Davis wrote that. I got to play with him several times before he went on.

4 Chesterfield
Jackson, Eyeball Music, BMI
I used to smoke Chesterfield cigarettes. It was a bad habit that cost me a lot of money. Maybe I can get some of it back with that song.

5 Steel Mill Blues
Writer and publisher unknown
We had an old 78 recording of that song a long time ago. I can't recall the name of the fellow that sang it, but I hope he is doing well.

6 Louisiana Blues
Writer & publisher unknown
That's from Leroy Carr and Scrapper Blackwell. I've always liked their songs, and I wish we had more of them.

7 Just Because
Shelton, Shelton & Robin, MCA Music, ASCAP
I've known that for as long as I can remember. My father did it.

8. Red River Blues
White, Fred Ahlert Music Corp., ASCAP
I think I picked that up from Josh White. There was a time when he was the cat's whiskers if you liked the blues.

10 West Texas Blues
Writer & publisher unknown
That's from the old Mississippi blue yodeler, Jimmie Rodgers. He had Louis Armstrong and the Mississippi Sheiks on some of his records. The country music people claim he is their father, but he seemed to like everybody and we all loved him.

11 When He Calls Me
Traditional
My mother used to sing that.

13 Rappahannock Blues
Jackson, Eyeball Music, BMI
I named that for the county where I grew up and where my people lived and worked for many years.

14 She's So Sweet
Fuller, publisher unknown
I got that from Blind Boy Fuller. We knew his songs in my community when we were coming up.

15 The Devil He Wore A Hickory Shoe
Trad., arr. by Jackson, Eyeball Music, BMI
That's from my mother. They used to sing that at the Mt. Zion Baptist Church in Woodville.

16 Have It Your Own Way
Writer & publisher unknown
The main player and the very good singer on that is my son James. I'm picking along in the back. I just wanted my friends to know that music is still coming along in the family.