All songs by Hound Dog Taylor, Eyeball Music, BMI, except as noted

Thanks to Joyce and Sandy Sutherland, Demetrius, and Bea Van Geffen. Very special thanks to Bob Koester of Delmark Records.

You can catch Hound Dog Taylor and the HouseRockers almost any night of the week in one of the shadowy little blues clubs on the south side of Chicago. In the city that’s produced more great blues artists than any other, Hound Dog plays more often, and for more people, than any of the well-known bluesmen. His sidemen change now and then, but usually you’ll find Ted Harvey perched behind his drums, chewing on a wad of gum and calling for someone to get him a drink, while the second guitarist, Brewer Phillips, wanders out into the audience, talking and dancing while he plays his battered Telecaster. Hound Dog sits back in the corner on a folding chair, laughing and singing and stamping his feet and pushing out two or three hours of non-stop boogie and blues.

Hound Dog draws all sorts of people—the older Mississippi-born working couples, the young, Chicago-born street society in their new clothes and Afros, and a smattering of dedicated white blues fans. And although his name is virtually unknown outside the city (he’s only had two 45s released before this album), Hound Dog attracts other musicians everywhere he plays. Such blues greats as Jimmy Reed, Big Walter Horton, Carey Bell, Honeyboy Edwards and Lee Jackson, as well as the lesser known but equally talented Little Arthur, Lefty Dizz, Son Seals, Magic Slim and Johnny Embry sit in often. When Hound Dog plays, there is rarely a break in the music; when one musician gets tired, another steps in to take his place.

Theodore Roosevelt Taylor was born in Natchez, Mississippi in 1915 and grew up around Tchule and Greenwood in the Delta. He first took up guitar when he was twenty, and played in both standard and E tunings, but now plays strictly bottleneck style. His blues reflects his early friendship with Elmore James and the other men who first electrified slide guitar—he plays hard and loud. Taylor gigged all over the Delta, and worked on the legendary King Biscuit Flour program on KFFA in West Helena, Arkansas, with Robert J. Lockwood and Sonny Boy Williamson. After coming to Chicago in 1942, Hound Dog worked at various day jobs, but he’s been a full time bluesman since 1957. He’s played in virtually every blues club in Chicago, and broadcasted for two years on Big Bill Hill’s blues show on WOPA. His tunes have been borrowed by many other blues artists, and a version of one of his instrumentals was cut by Freddie King. The tune Hideaway made Freddie a star, but Hound Dog never received composer’s credit.

Second guitarist Brewer Phillips was born in Coila, Mississippi in 1925 and grew up on a small farm. He started playing blues as a boy, and gigged around West Memphis in the late ‘40s, backing Roosevelt Sykes, Joe Hill Louis, Memphis Slim and Bobby Hines. Brewer found work as a carpenter when he came to Chicago, and thinks of his music mostly as a hobby. He still plays in the raw, distorted style of West Memphis, but considers Jimmy Reed and Hound Dog as the main influences on his music. Brewer usually plays lead on a dozen songs a night, and that’s his lead guitar on 44 Blues and Phillips’ Theme. He and Hound Dog teamed up after Brewer sat in with the HouseRockers one night in 1959 in a West Side tavern.

Native Chicagoan Ted Harvey has been drumming with Hound Dog for almost seven years. Like many of the best blues drummers, he started his career in the 5th Army Band and gained experience playing jazz around the city in the early ‘50s. But by 1952 he had switched to blues and was backing Shelby LaDell at Allen’s Lounge on 47th Street. He played with Little Walter in the mid-‘50s and picked up pointers from Fred Below. Ted’s worked with most of the bluesmen in Chicago, including a stint with Muddy Waters at Pepper’s Lounge. He and Hound Dog first met at the club Zanzibar in 1955 when Ted was backing Elmore James, and again at Elmore’s funeral in 1963. Ted finally joined the group in 1965, replacing Levi Warren. Like Brewer, he holds a day job, and often comes to gigs direct from his work as a shipping clerk for a downtown department store.

Hound Dog and the HouseRockers play all over the city on weeknights, but can almost always be found on Friday and Saturday at the Expressway Lounge, a dim, crowded club on 55th Street. On Sunday afternoons they play at Florence’s on Shields, where their audience is mostly other bluesmen. The sound of this album is the sound of the band, just as they play in these clubs, with no added sidemen, overdubbing or special studio effects. There are a few rough edges, as there are in all great blues performances, but this is the magic that’s made Hound Dog Taylor the most consistently popular bluesman in Chicago today.

This record, released in 1971, launched a career for Hound Dog that took him all over the U.S. and even to Australia and New Zealand. By 1973, he was no longer playing the South Side (except for fun) and had been featured in Rolling Stone, Guitar Player and other national press. He went on to make two more albums for Alligator, and to become one of the best-loved bluesmen in the country. Since his death in 1975, we’ve issued two albums of previously unreleased performances. Brewer Phillips and Ted Harvey continued to play after Hound Dog’s death. Brewer passed away in 1999.

This album was also the first release on Alligator, which has since then grown beyond our wildest dreams to become one of the leading blues labels in the world. This record was the beginning of that forty-year legacy. Genuine Houserockin’ Music indeed. 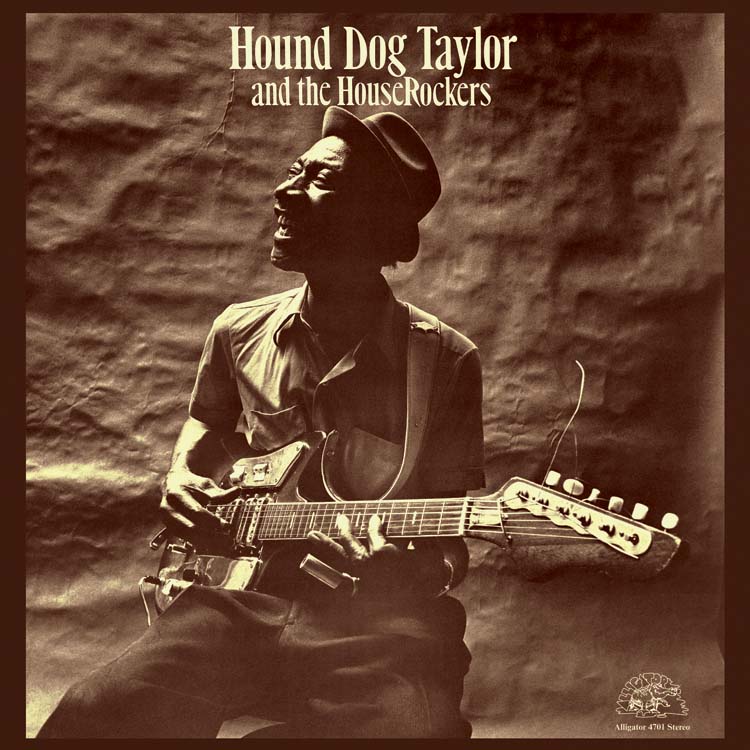 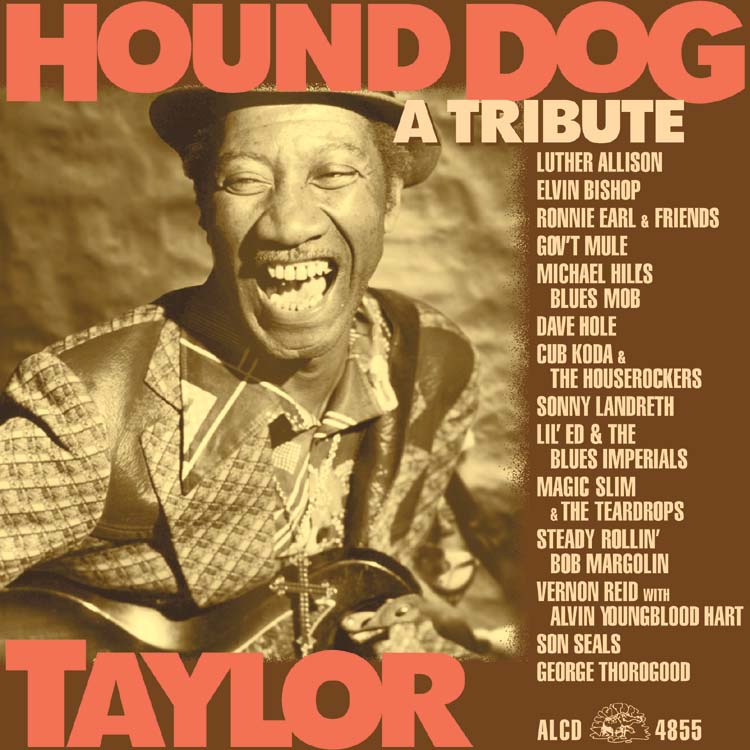 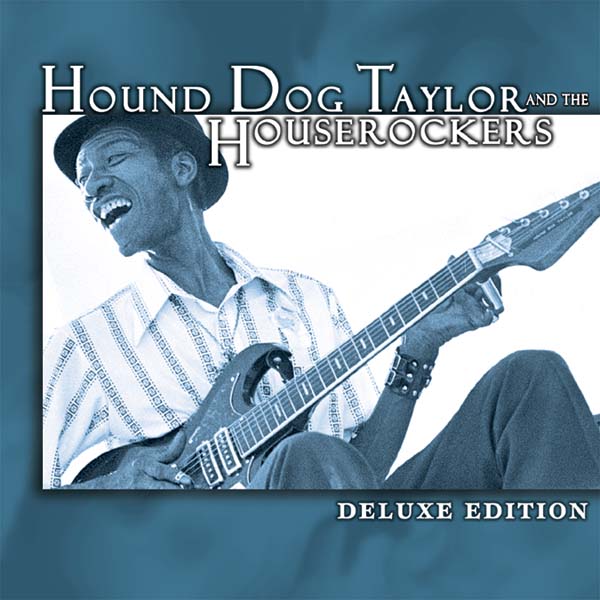 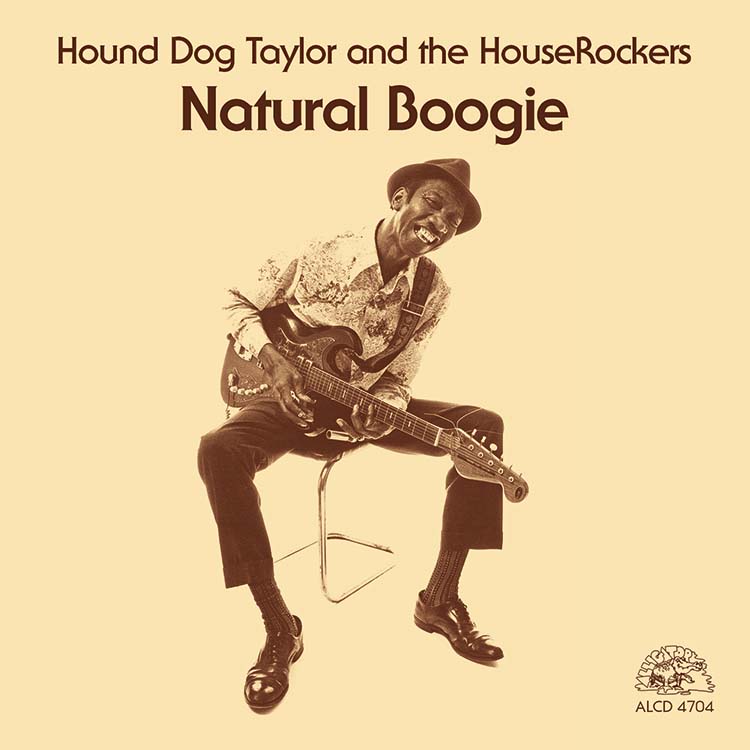