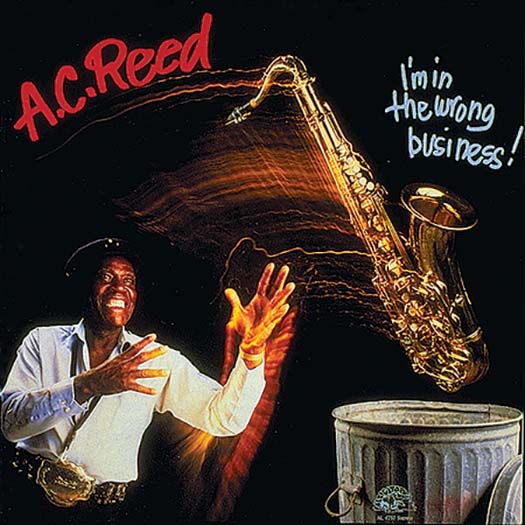 I'm in the Wrong Business!

Very special thanks to my manager and brother 'n' law, Stan Jones, and his staff, who keep me and the Spark Plugs delivering the real blues to you all year long.

Hard Times, Going To New York and Moving Out Of The Ghetto originally appeared on LIVING CHICAGO BLUES, VOL. 4 (Alligator AL 7704). They were produced by Bruce Iglauer and recorded at Curtom Studios with Fred Breitberg engineering.  They have been remixed for this compact disc release.
Appearing on these songs are:
A.C. REED, Tenor Sax And Vocals
LARRY BURTON, Guitar
ARON BURTON, Bass
CASEY JONES, Drums

A.C. Reed may joke about being in the wrong business, but one listen to this record will reveal a man still in love with his music after a lifetime in blues.

He's been called "the definitive Chicago blues sax player," and has been in constant demand for both recording and live shows with such artists as Albert Collins, Muddy Waters, Buddy Guy, The Rolling Stones, Eric Clapton, Son Seals, Earl Hooker and Bonnie Raitt.  Described by The Nashville Tennessean as "the kind of guy that could get an audience of librarians stompin' and screaming," A.C. has finally captured that excitement on vinyl with I'm In The Wrong Business!  It's an irresistable package of contemporary blues rooted firmly in the Chicago tradition.

While known primarily as an eminently soulful tenor saxophonist, A.C. also showcases his wryly humorous songwriting and gritty vocals on this album.  Those talents will come as no surprise to those who know him from his long associations with Albert Collins and Buddy Guy, or from his criss-crossing the country with his road band, The Spark Plugs.  Written and produced by A.C., I'm In The Wrong Business! features members of his own band as well as long-time admirers like Stevie Ray Vaughan and Bonnie Raitt.  Above all else, this record demonstrates why A.C. has long been one of the most respected musicians in the blues world.

Born Aaron Corthen (A.C.) in Wardell, Missouri in 1926, A.C. came to Chicago in 1942, where he bought a pawn shop sax with his very first paycheck.  He quickly gained a reputation as a bluesman with a golden horn, and was snatched up by Willie Maybon.  In the '50s, A.C. played the blues with guitarist supreme Earl Hooker and red-hot R&B with his own combo and with Dennis Binder's band. Throughout the '60s he recorded a flurry of self-penned singles on small labels such as Age, Nike, and USA.  From 1967 to 1977, A.C. toured the world with guitarist Buddy Guy and harpman Junior Wells, including a memorable European tour in 1969 with The Rolling Stones.  After leaving Buddy and Junior, A.C. joined Son Seals for two tours of Europe.  Then an explosive saxophone chorus during an onstage jam session with Albert Collins led to a five-year stint with "The Master Of The Telecaster" as one of the original Icebreakers.

One of the best-received parts of an Albert Collins and the Icebreakers show was A.C.'s dynamic warmup vocals, so it seemed only natural when he embarked on a solo career in 1983.  That same year his I Am Fed Up With This Music received a W.C. Handy Award nomination for blues single of the year.  The song was one of the highlights of his first full album as a leader, Take These Blues And Shove 'Em, on the tiny Ice Cube label.  The album was described in New Orleans' Wavelength as "a musical masterpiece from beginning to end."  With I'm In The Wrong Business! A.C. has painted his second musical masterpiece.

From Fast Food Annie (a woman who's "cool like tomatoes on a Whopper with cheese") to his warning about My Buddy Buddy Friends, A.C.'s lyrics combine the cleverness of a Willie Dixon with the street-smart world view of a bluesy Lou Reed.  On These Blues Is Killing Me and I'm In The Wrong Business ("should have been a boxer and made that movie Rocky III/would have been a star like Sylvester and Mr. T"), A.C. continues to chronicle his tongue-in-cheek love-hate relationship with the music business.

In the wrong business?  No way.  This record finds A.C. Reed takin' care of business--and then some!
---Dan Kening
(Dan Kening is a contributing editor for Chicago Magazine)