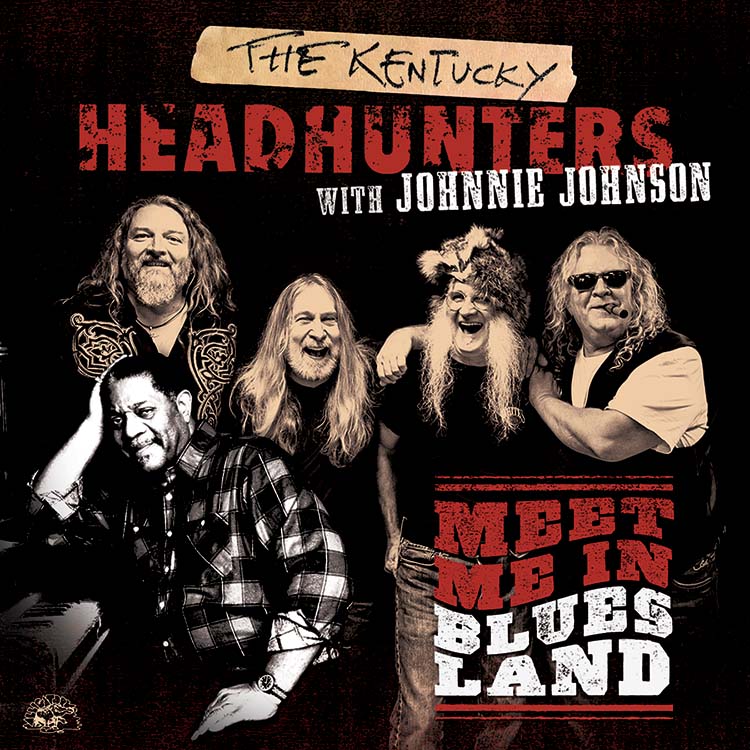 A hip-shaking dose of blues, roadhouse R&B and old-school rock 'n' roll, with rock 'n' roll piano legend Johnnie Johnson working his magic on the keys and The Kentucky Headhunters working the greasy grooves like they were born to play them.  "The greatest sideman in rock 'n' roll" (Rolling Stone) joins forces with "The great American rock 'n' roll band" (Billboard)

Lead Vocals:
+ Doug Phelps: Vocals on Stumblin, Party In Heaven, King Rooster, Shufflin’ Back To Memphis, Sometime
* Richard Young: Vocals on Walking With The Wolf, Little Queenie, Meet Me In Bluesland, Superman Blues
= Johnnie Johnson: Vocals on She’s Got To Have It

This record is dedicated to the memory of Johnnie Johnson, Gary Martin and Johnny Winter

On January 25, 2003, Rock and Roll Hall of Famer Johnnie Johnson—the man Rolling Stone called “the greatest sideman in rock and roll” for his groundbreaking piano work with Chuck Berry—stepped on stage at Houston, Texas’ Reliant Stadium. He joined his hosts, The Rolling Stones, for a rousing rendition of "Honky Tonk Women." After hanging out all night with Keith Richards, Johnson got on a plane and flew to Kentucky. There he reunited with his good friends, Grammy-winning Southern blues-rockers The Kentucky Headhunters—brothers Richard and Fred Young, Greg Martin, Doug Phelps and Anthony Kenney. The plan was to have Johnnie lay down some piano for the band’s upcoming release, Soul. But the vibe was too strong and the music too good, so the tape just kept rolling. With songs and arrangements furiously being created on the spot and everything recorded live as it happened over the course of three days, a magical musical event was underway.

Because the whole session was spontaneous, there were no immediate plans to release an album. After Johnnie’s death in 2005, the tapes, while never forgotten, remained unissued. The performances, which can now be heard on Meet Me In Bluesland, found Johnson playing some of the deepest and most rocking blues piano of his legendary career. With The Kentucky Headhunters at their down-home best, the album is a country-fried, blues-infused party from start to finish. “The minute Johnnie sat down with us, the music was a kind of ecstasy,” says guitarist/vocalist Richard Young. “Johnnie made us play like real men,” says guitarist/vocalist Greg Martin. “Playing with him, the groove got bigger and much more grown up.” Drummer Fred Young adds, “We all admired Johnnie from the start. The first time we played with him was the first time I ever felt like we were doing it right. The music we made on Meet Me In Bluesland is as good as it gets.”

The friendship between Johnson and The Kentucky Headhunters began in 1992. Headed to New York for a Grammy Awards party, Greg picked up the new Johnnie Johnson CD, Johnnie B. Bad, for the ride. The band listened to nothing else all the way to New York. Having no idea he’d be at the party, they were shocked to see Johnnie Johnson sitting alone at a table. After some quick introductions, the musicians talked for hours, becoming fast friends. In 1993 they released their first collaboration, That’ll Work, on Nonesuch. They took the show on the road, playing gigs from the West Coast to New England, from Chicago’s Buddy Guy’s Legends to New York City’s Lone Star Café. They performed at The Jamboree In The Hills in Belmont County, Ohio, where Johnson, with the Headhunters triumphantly jamming behind him, played to over 30,000 fans.

From their very first meeting, Johnson and The Kentucky Headhunters stayed close, getting together whenever possible. In 2003, when the band asked Johnson to record with them again, he couldn’t wait to get back to Kentucky and make music with his friends. Over the next three days, they created an album filled with rollicking, timeless performances. “Johnnie’s music was spontaneous, organic, magic energy,” says Greg. “During the recordings, everything was off-the-cuff and easy; a higher power just took over. This album is special, and we’re very happy in 2015 that it’s coming to fruition.” Adds Fred, “Johnnie gave us the gift of letting us know what it was like to do something great.”

Growing up on a 1300-acre family farm in Edmonton, Kentucky, the Young brothers, Martin and Kenney heard plenty of raucous R&B and deep, soulful blues courtesy of Fred and Richard’s mother, who listened to powerhouse radio station WLAC late at night. “She was a real hip white girl,” Richard says. “She was a huge influence on us.” Their father loved big band jazz, Benny Goodman, Tommy Dorsey and Sarah Vaughan. “Music in our home was a mixture, unlike what most farm kids heard.” Part of their musical upbringing included their friendship with three African-American families who lived and worked on nearby farms. The boys heard gospel and blues, both sung by their neighbors in the fields and blasting out of their radios. They were reared on Howlin’ Wolf and Muddy Waters (the name Headhunters was a nickname given to Waters and Jimmy Rogers when they came into a club ready to take on all comers). “All of these things taught us the blues,” says Richard. They loved Chuck Berry, and were especially wowed by Berry’s piano player, Johnnie Johnson. Befriending him and recording with him was a dream come true for the band. According to Fred, “We were fortunate to know him. It was a good marriage.” Richard adds, “Anyone who ever played with him became a better player.”

Johnnie Johnson was born on July 8, 1924 in Fairmont, West Virginia. He began playing piano at age five and never stopped. While serving in the Marines, he joined The Barracudas, a Marines servicemen’s band. He moved to Detroit and then Chicago, eventually playing with Muddy Waters and Little Walter. He landed in St. Louis in 1952 where he formed The Sir John Trio playing jazz, blues and pop standards. Chuck Berry, an ambitious local guitarist and songwriter, was added to the group the same year and eventually took over leadership of the band. After Berry scored a contract with Chess Records, the hits came fast and furious. Many, including Maybellene, Nadine, Carol and School Days, were fueled by Johnson’s two-fisted piano. He was the high-octane gasoline in Chuck Berry’s rock ‘n’ roll engine until, tired of the road, Johnson returned to St. Louis to become a bus driver. With the 1987 release of the Chuck Berry documentary, Hail! Hail! Rock ‘n’ Roll, Johnson found himself back in the spotlight, reintroduced to the world by his friend-to-be Keith Richards. After three solo recordings, Johnson joined his musical cohorts The Kentucky Headhunters for 1993’s That’ll Work. In 1996 and 1997 he toured with Ratdog, the band fronted by The Grateful Dead’s Bob Weir. Johnson was inducted into the Rock and Roll Hall of Fame in 2001 and continued to perform and record until his death in 2005. His 2003 sessions with The Kentucky Headhunters, released now for the very first time as Meet Me In Bluesland, are some of the most spirited and organic recordings of his remarkable and still influential career.

Thanks first and foremost to God, who gave us the gift of music,and eventually guided us to Johnnie Johnson's doorstep. For our families, who have always supported our "Spanky and Our Gang" lifestyle and love us unconditionally, our friends who know our houses, and our fans who know, know is to love you...you are the best. To the wonderful family of Johnnie and Frances Johnson...even if there was no music and we met, you guys would still be Uncle Johnnie and Aunt Frances. A big thanks to Bruce Iglauer and all at Alligator Records for giving us the opportunity to present the music we loved to play with Johnnie to the world. Thanks to Bubba Sullivan, Levon Helm, Rick Danko, Garth Hudson and The Band, The Helena Blues Festival, Keith Richards, Dr. John, The Memphis Horns, Lonnie Mack, Antone's, Reese Wynans, Jimmy Hall, Mark Orr, Chuck Leavell, Black Stone Cherry, Ray Waddell, Mike Bradley, John Dickinson, Tommy Starr, Bryan Locke, George Turek family, Travis Fitzpatrick, Tom Long, Mitchell Fox, Ben Ewing, Rick Mattingly, Almon and McPike, All Access Coach, "The Lowdown Hoedown," The Kentucky Music Hall of Fame and The Rock and Roll Hall of Fame.