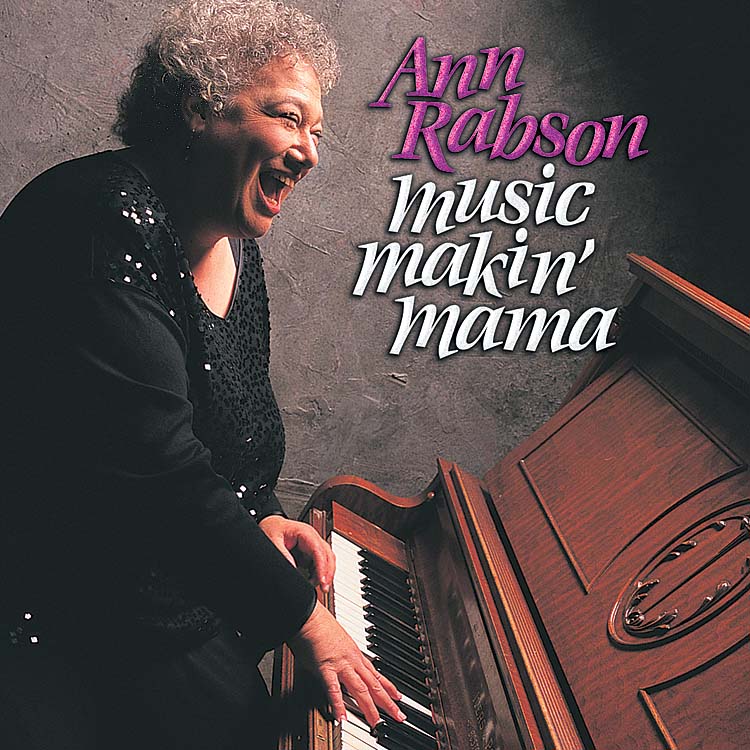 You hold in your hands a potent slice of joy and passion; the output of an experienced musician and worldly woman working well at what she loves. The rhythms roll and pitch. The songs, full of good humor, sensitivity and poignancy, revel in love, lust and liberty -- all the stuff of life. Beneath it all is a sense of rollicking good fun that taps into eternal wellsprings of vital energy, rapture and delight.

Ann Rabson was born in 1945 in New York, and grew up in Yellow Springs, Ohio, where her parents taught college. Even as a young girl, Ann latched on to the blues. The crystallizing event came when she was four and heard Big Bill Broonzy sing I'm Gonna Move To The Outskirts Of Town on the Purdue University radio station. As Ann told Down Beat Magazine, "When I first heard Big Bill Broonzy, suddenly it seemed like all the other music I'd heard was in black and white and this was in living color."

Ann's father, a jazz fan, had several 78s of boogie woogie piano, including Mary Lou Williams, whose work thrilled and captivated the impressionable young woman. He also took his daughter to hear Sonny Terry and Brownie McGhee before she was in her teens. "In my mid-teens, my first boyfriend plied me with recordings of Jimmy Yancey and Leroy Carr and Scrapper Blackwell. He also took me to hear Sleepy John Estes. That boy really gave me the blues," Ann remembers.

Ann began studying guitar at age 17, and by 18 was playing semi-professionally. She worked an office job by day and played blues at night. About a decade later, after a divorce, Ann moved with her daughter to Fredericksburg, Virginia, where she made music full time. During the 70s and 80s, in and around Fredericksburg, she played solo gigs in fancy restaurants and college hangouts, nice clubs and dives, Moose Lodges and American Legion Halls (with a country band!). It is important to note here that Ann performed as a solo artist for nearly 20 years before Saffire was formed.

"My solo gigs back BP (before piano) were almost exclusively covers. I did a lot of Bessie Smith's stuff and Billie Holiday. More swingy things than I do now, and blues versions of some rock and roll songs, like Love Potion #9. Two of the tunes I did often during that era are included on this recording -- One Meatball which I learned from my father, and He's Got Me Goin', which I learned from a Bessie Smith recording. I also did quite a few of Sonny Terry and Brownie McGhee's tunes, and quite a lot from Leroy Carr -- everything I could learn. And a little Willie Dixon, mostly by way of Howlin' Wolf," Rabson says.

In 1978, worried about the cost of her daughter's education, Ann took a day job as a computer analyst, while playing the blues at night. About two years later, she started playing the piano, because she always liked the piano. (Also, she was in a band with too many guitarists.) She cites as influences Jimmy Yancey, Jelly Roll Morton and Amos Milburn.

By the early 80s, Ann had established herself as a popular performer with a strong local following. Around this time she met Gaye Adegbalola, a biochemist by training, who had been honored as Virginia Teacher of the Year, and began giving her guitar lessons. Actually, Gaye says she had been "begging" Ann for lessons for about three years. Their first gig together was at the local Unitarian Fellowship hall.

In 1988, when her daughter graduated from college, Ann quit her job and went back to music full time. She formed Saffire -- The Uppity Blues Women, with Gaye, and sometime later they added original bassist Earlene Lewis to the group. In the late 80s the trio hit the road, sharing tiny hotel rooms, dividing up tinier concert fees, and putting over 100,000 miles on their van.

Saffire's self-titled debut album on Alligator exploded onto the scene in 1990, becoming one of the label's best selling releases and generally blowing people's minds. The group went from performing in little clubs to festivals and concert halls around the world. In the subsequent six years they recorded four more albums for Alligator, and became one of the most recognized and requested acoustic blues groups in the world.

Don't think that because you're holding this album that Saffire is no more. Nothing could be further from the truth -- the group is still vital and ongoing. Ann told the St. Petersburg Times, "I love playing in [Saffire] because there's so much creative flow. It's stream of consciousness performing."

But this is Ann's story. All during Saffire's climb to international recognition, Ann continued to do solo gigs, and appeared on albums by nearly a dozen other artists. Other musicians had come to recognize her special combination of precision and artistry, the warmth of her personality and the skill of her presentation -- even legends like Chicago piano patriarch, Sunnyland Slim. Seeing the two of them together backstage at the Chicago Blues Festival not long before Slim passed, the bond between them was obvious.

"He was a hero of mine and I just enjoyed hearing him play," Ann recalled. "One night someone, probably (his guitarist at the time) Steve Freund, told him that I could play. He asked me to play a set for him. After I played, he got up again and played a thunderingly wonderful set. From then on, whenever I was in Chicago -- which was as often as I could -- he greeted me with enthusiasm and asked me to play for him. We chatted a number of times, mostly about the appalling condition of various pianos."

All of which brings us back to this album. Now you could ask, "Why does Ann Rabson, a musician with a successful career and a group she loves, want to do a solo album?" Ann would answer, "I've wanted to do a solo album for many years. Lately, I guess I've been feeling my own mortality, and I find myself cussing folks like Jimmy Yancey and Big Maceo Merriweather for not leaving more recordings. Not that I'm in their league, but someone might want to hear me after I'm gone. Also, I've had some encouragement, well, nagging by fans.

"This album allowed me to focus on my vision for the music, and experiment with textures, styles and instrumentation. Plus, I got an opportunity to play with other musicians who bring their own talents to the music," Rabson pointed out.

Listen here with open ears and an open heart. Let the music soothe you like a warm, fragrant bath. Absorb the passionate rhythms, pounding piano and soaring violin, the guitar work that stings and swings, the confidence and fervor in Ann's voice. Let her be your music makin' mama.
-- Niles Frantz, December 1996

Niles is the host of Comin' Home on WBEZ 91.5 FM, Chicago, and is emcee of the annual Poconos Blues Festival.

I wrote some of the tunes on this album, like Music Makin' Mama and I Haven't Got A Clue. Some -- like Givin' It Away and What I Don't See -- are songs that caught my ear within the last year while I was looking for material for this album, and some -- like He's Got Me Goin' and Skin And Bones -- have been featured in my solo performances for decades.
I wanted to write a song in that wonderful blues tradition of bragging, and Music Makin' Mama is the result. Writing about my great strength or voodoo powers would be false advertising, and writing about my legendary beauty seemed unnecessary, so I decided to write about my music.

When I heard Another You on a Sonny Rhodes album, I knew I wanted to record it. I immediately decided to invite violinist Miriam (Mimi) Rabson, who plays with amazing passion, to help me fully express the fire and pain in this song. Fortunately I was lucky enough to have an "in" with her, and she agreed to join me on this tune and on the rockabilly social commentary of Snatchin' And Grabbin' as well.

Mimi's father (who also happens to be my father) is a Josh White fan, and One Meatball is a song he used to sing to me when I was a little girl. The song made me so sad that I finally asked him to stop singing it. When I grew up and began to make music myself, this song became a favorite.

Some men court girls with candy, jewelry and flowers, but back in 1971 when my dear husband, George, first started hanging around with me, he gave me a Bessie Smith album. What a guy! There was a tune on it -- He's Got Me Goin' -- that reminded me of him, so I learned it and added it to my solo repertoire.

Even though Roosevelt Sykes wrote Skin And Bones decades before the tragedy of AIDS struck, this sad and bitter song is painfully up to date.

The song Serial Love was inspired by a conversation I had with James Harman about friendships among musicians. We see one another for short visits separated by long periods of time. When we do get together, we just take up where we left off. While writing the lyrics, I realized that lovers make better song subjects than friends do, and since so many couples are in this situation, I changed the focus.

Ever notice how many great songwriters play bass? In the blues, Willie Dixon immediately comes to mind, of course, but the same applies in other genres -- think of Paul McCartney and Sting. No Later On was written by one of the best blues and R&B songwriters around today, Sarah Brown, who as it happens, is also an exceptional bass player.

You'll find many shades of blue on this recording, from the Louisiana inspired rhythms of Huey Smith's Baby, Every Once In A While to the Memphis feel of Z.Z. Hill's I'm Gonna Stop You From Givin' Me The Blues, from the traditional patina of Cow Cow Davenport's Givin' It Away to Sarah Brown's shiny, brand new No Later On, but no matter what flavor the songs have, they still taste like the blues to me.
-- Ann Rabson