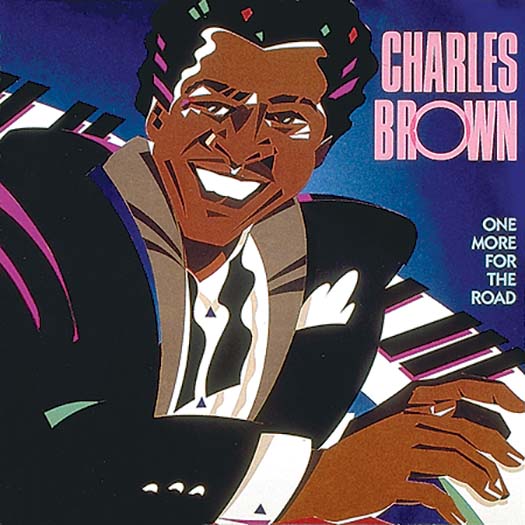 One More For The Road

The comeback album for the king of suave, mellow after-hours blues piano and vocals, with a touch of swinging jazz. Charles was an R&B superstar in the 40's & 50's and in the 90's toured with Bonnie Raitt,and cut 6 new albums, none better than this one.

Charles Brown has created standards -- Driftin' Blues, Merry Christmas, Baby, Black Night, Please Come Home For Christmas -- songs that have been revived and requested by generations of musicians and fans.

He's been big on the charts. Was a contemporary of Nat King Cole, a primary influence on early Ray Charles and Little Richard and served as the absolute inspiration for Sam Cooke's exhilarating Night Beat blues album -- an unacknowledged tribute to Brown including several wonderful readings of Charles Brown songs. Even Bring It On Home To Me, one of Cooke's most inspired performances, was a barely disguised rewrite of a Brown song called I Want To Go Home.

Charles Brown has been neglected, overlooked by a blues revival that has unearthed every musician, singer and would-be low-down guy that has ever played guitar, harmonica or piano. No need to worry.  Ladies and gentlemen, Charles Brown is back.

Charles Brown was born in Texas City, Texas in 1922. A schoolteacher with a degree in chemistry, he grew tired of the low pay and struck out for Los Angeles, lured by the sophistication of the city and a chance to make use of his skills as a piano player. He worked days as an elevator operator, and at night he haunted a fertile club scene. After winning a weekly amateur contest at the Lincoln Theatre in 1944, he came to the attention of guitarist Johnny Moore who auditioned and subsequently hired him. Inspired by Brown's addition and following in the footsteps of Nat Cole, Johnny Moore and the Three Blazers quickly became a popular fixture in the Hollywood nightclubs. A year later, a song Charles had written in high school, Driftin' Blues, rocketed the Three Blazers and its writer and lead vocalist, Charles Brown, to stardom. The song, a brilliant bit of blues metaphor that suggests the unfocused racial ennui of Ralph Ellison's Invisible Man, has defined Charles Brown's sound to this day. Dark minor chords and a slurred, moody, exaggerated vocal read that sounds almost spoken made this the logical deep blues extension of Nat Cole's ballad interpretations. Charles Brown hit a vein. Subtle, smart and unmistakably black, Driftin' Blues'despair remains singularly drenching and penetrating.

Although he has recorded on and off for many years, One More For The Road finally captures the full scope of talent that the early hits suggested. Jazz, pop, blues and standards send out in bold relief. The fact that it took 40 years is near tragic. The fact that it has happened is cause for real celebration. The song selection is impeccable -- the treatments sensitive, inspired and moving. It's hard to pick a favorite: Sinatra, Cole, Charlie Rich, Bobby Bland, Billy Eckstine and of course vintage Charles Brown are all reprised. The sensitive collaboration of Billy Butler, Harold Ousley, Kenny Washington and Earl May establishes a real defined groove. The album is seamless. Nothing less than a stunning triumph, One More For The Road deserves our full attention.