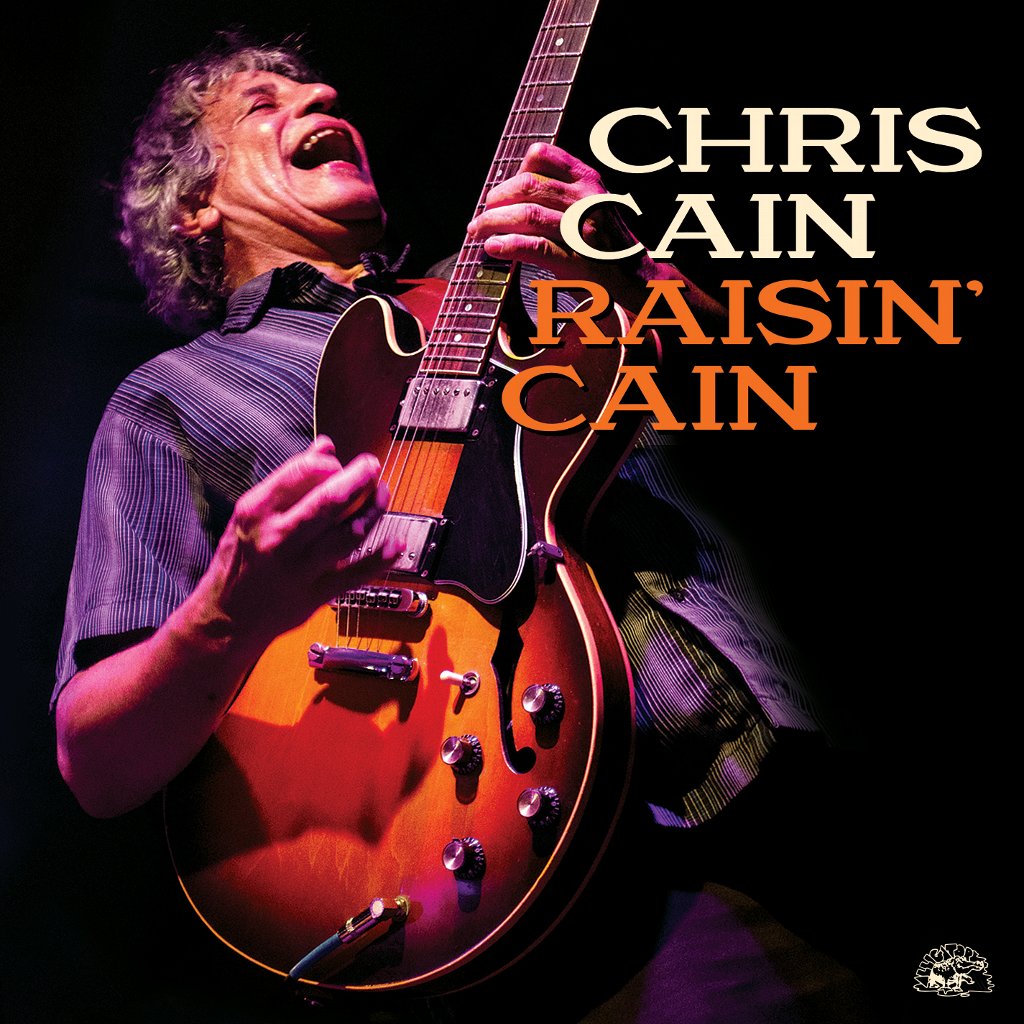 The Alligator debut of one of the truly great blues guitarists of his generation.  Twelve original Cain compositions make Raisin’ Cain a head-spinning showcase of raucous blues, horn-driven romps and moody, after-hours laments bursting with sharp songwriting wit, gruff, commanding vocals and sparkling, amazingly inventive guitar playing.  "Hands down my favorite blues player on the scene today.He’s an absolute blinder of a guitarist, with the voice of B.B. King and the chops of Albert King." —Joe Bonamassa

Take some influence from B.B. King, Albert King, Ray Charles, and a pinch of Albert Collins. Add in dazzling blues and jazz guitar chops, a rich soulful baritone vocal delivering original, often wry and beleaguered lyrics with sophisticated chord changes and instrumentation, and skills on various horns and keyboards, all delivered with an uptown cool that never lacks searing passion. It all adds up to the one and only Chris Cain, who has gone from being a newcomer phenomenon bursting onto the blues scene in 1987 with a classic debut release, to being a legend, inspiration and long-established member of the blues pantheon. His fifteenth CD, Raisin' Cain, ranks among his best.

The San Francisco Bay Area has nurtured an illustrious coterie of blues guitar greats, including Chicago transplant Mike Bloomfield and Robben Ford. So blues fans took notice when word started coming from the South Bay in the late '80s that a serious new contender was stepping into the ring, with major league string bends, a fluid touch, a soaring tone and a master's approach to composition. Chris' first CD, Late Night City Blues, was issued on Robben Ford's brother Pat's Blue Rock'It label. Containing all the essential elements of Chris' excellence, conveyed via shuffles, slow blues, swing and funk, framed by keys and horns, it garnered raves. The album eventually four W.C. Handy nominations including Band Of The Year and Guitarist Of The Year.

Chris was born in San Jose on November 19, 1955, as he recounts in "Born To Play." Both his parents were blues-enlightened, especially his Memphis-raised African-American father but also his Greek mother. He was taken to concerts by blues and jazz immortals from the get-go; he remembers attending a B.B. King show when he was three. His father gave Chris a guitar at age eight; by the time he was 18 he was playing professionally (and had also taught himself piano). His mother introduced Chris to Mike Bloomfield's music early on; it served as an affirmation that someone like him could achieve what he was chasing. Vocal inspirations came from Curtis Salgado, Gary Smith, and big-voiced jazzy blues singers like Jimmy Witherspoon and Big Joe Turner. Chris has described his efforts to sing in a voice like his speaking voice, and his vocals reflect a conversational quality as well as a full quotient of melodicism. He studied music at San Jose City College (where he also took up saxophone); soon he was teaching jazz improvisation there. Eventually, to help him get jobs, he recorded the songs that became Late Night City Blues. Chris says, "Today that record is still a favorite. It was me doing it my way." It sent him into the blues public consciousness and onto the touring circuit. He made an immediate splash, earning the respect of his fellow musicians, including that of his heroes Albert King and Albert Collins, who invited Chris onstage to jam with them.

Since then Chris has cut a dozen CDs on Blue Rock'It, Blind Pig, Little Village, his own label and a 2015 release fronting a New Zealand big band. It is a sign of the esteem from his peers that he has been in demand for recorded cameos, with Mighty Mike Schermer, Luca Giordano, Sista Monica, E.C. Scott, the Ford Blues Band, Robben Ford, Chester Thompson and Nancy Wright, plus many others. His previous album, Chris Cain, on the Little Village label, was produced by Kid Andersen and recorded at Kid Andersen's Greaseland studio in San Jose in 2017. Things went so well that the principals returned to the scene of the crime. Raisin' Cain is the happy result.

Chris' path to Alligator has been the proverbial long and winding road. Early on, Chris sent some of his music to Alligator; the label took a pass. After all these years, it's extremely gratifying to see that the stars finally lined up, and Raisin' Cain more than justifies the mutual faith between Chris and Alligator that should benefit both parties and blues fandom. The program is all originals, with Chris stinging and swinging over mellow but insistent grooves in well-crafted settings and on top of his game, even venturing to an Arp Soloist synthesizer for the concluding Space Force. The autobiographical Born To Play reiterates that few can or could dig as deeply into a slow blues as Chris. But it's his versatility as well as his musical mastery that continues to mark Chris as special. Chris continues his globetrotting (he's performed in Argentina, Uruguay, Italy, Spain, France, Belgium, The Netherlands, Sweden, Norway, Switzerland, Australia, New Zealand, Russia, Ukraine and more) and racking up highway miles. He retains his reputation as one of the tastiest and most powerful artists on the scene and a musician's musician. He's a beloved cult figure in the Bay Area, and his licks resound through the playing of many locals. But there was never a hit song and he never sustained visibility on the national scene. Now he has an opportunity with a label which has proven to be a major asset for its roster.

For all his booming voice, Chris will never be known for the imposing physical stature its depth suggests. But that's the only lack of stature about Chris. When a lucky listener enjoys his music, there is absolutely no doubt that Chris Cain is a giant. —Dick Shurman