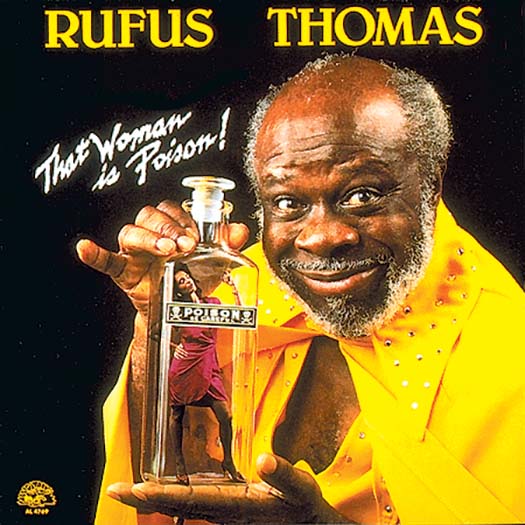 That Woman is Poison!

Memphis music might never have come grooving out of the city's tree-shaded streets and the surrounding cottonfields to conquer the world, if Rufus Thomas hadn't been there to help it along.

When Sam Phillips launched his fledgling Sun label in the fifties, it was Rufus who gave the company its first hit, a sweet-and-nasty Hound Dog-style song called Bear Cat.  In 1960, Rufus and his daughter Carla recorded Cause I Love You for Satellite, another label that was just getting started.  The company changed its name to Stax soon after Cause I Love You became a hit.  Stax Records went on to define and epitomize soul music, with the help of Otis Redding, Booker T. and the M.G.'s, Sam and Dave, and of course Rufus, who kept Stax going with gritty dance-lesson hits like The Dog, The Funky Chicken, and the immortal Walking The Dog.

Rufus was a Memphis music legend long before he helped get Sun Records off the ground.  During the 1930's, when Memphis' Beale Street was the epicenter of blues culture, a six-year-old Rufus Thomas made his performing debut at Beale's Grand Theater, playing the role of a frog in a local theatrical production.  As a teenager, he toured Deep South backwaters and whistle stops with the Rabbit Foot Minstrels.  Returning to Memphis and the still-jumping Beale Street scene as half of the Rufus and Bones vaudeville team, he specialized in singing, dancing, comedy and all-around jiving.  Thomas' local popularity led to long-running gigs as master of ceremonies at the more opulent Beale Street theaters, where the likes of Count Basie and Louis Jordan were headline performers.  He also emceed at the rowdy amateur night competitions, where two early contest winners were B.B. King and Bobby "Blue" Bland.

When Memphis radio station WDIA introduced its pioneering black music programming in 1949, becoming "the Mother Station of the Negroes," Rufus was among the station's first and most flamboyant air personalities.  He had two aptly-titled shows of his own, "House of Happiness" and "Special Delivery."  He's announce his presence on the air by crowing, "I'm young and loose and full of juice, I got the goose, so what's the use?"  After proclaiming these words with gravel-voiced relish, Rufus would spin the latest blues and R&B hits, puntucating the music with exclamations, interpolations, and flights of sheer verbal lunacy.

But throughout his years as a Beale Street celebrity and WDIA jockstar, Rufus also held down a demanding dayjob, operating eight boilers at a textile-bleaching plant.  With a wife and four children to support, Rufus Thomas wasn't about to stake his family's economic well-being, and his kids' educations, on the vagaries of an entertainment career.  He'd get up at the crack of dawn, put in a grueling day at the textile plant, rush over to WDIA to do his afternoon show, then get in a car crammed with musicians and their instruments and drive, sometimes for several hours, to an evening gig in Tennessee, Mississippi or Arkansas.

"I must have played every fraternity house there was in the South," Rufus told author Peter Guralnick in Sweet Soul Music.  "When we played Ole Miss, they'd send the girls home at midnight, and then we'd tell nasty jokes and all that stuff.  Oh man, we used to have some good times down there."  These gigs helped make Rufus Thomas a legend beyond Memphis' city limits.  They also kept him young.  He'd watch the way the kids were dancing, what kind of rhythms and lyrics they responded to, and work those insights into records like Walking The Dog, perhaps the ultimate Southern frat-party anthem.  Performing in outrageous outfits--bermuda shorts and knee-high socks in shocking day-glow colors, ankle-length capes--Rufus would brag that he was "the world's oldest teenager."

But above all, Rufus Thomas was a blues singer.  Whether he was stoking young romances with a slow-burner or pumping out a driving shuffle, Rufus sang with the grit, the growl, the pinpoint definition of vocal textures and pitch-shadings he'd learned from his earliest years in Memphis.  "The blues you heard in the Beale Street theaters was a more polite, uptown kind of blues," he recalls.  "To hear the real down-in-the-alley blues, you'd have to go out to the rougher joints, in neighborhoods like Orange Mound.  The Beale Street crowd would talk about going to these places like it was slumming, but we'd go, we'd go!  Because those were the places where you got to know the blues."

Thomas' years of experience have hardwired this instinctive blues knowledge into his nervous system.  During the late sixties and early seventies, when Stax began sliding downhill and young black listeners seemed as determined to shun the blues as young whites were eager to embrace it, Rufus kept the music alive on Memphis radio and in his incendiary live shows.  More recent performances have shown no dimunition of his finely-honed voice and timeless, straight-from-the-heart feel.  And now, Rufus Thomas has returned to the music that shaped and nurtured him.  THAT WOMAN IS POISON! has a soulful, swaggering strut, but it is first and foremost a blues album, and a long-overdue celebration of Thomas' mastery of the idiom.

The minute you hear Rufus' throaty warning, "That woman is poison, she'll bite the head right off a snake," you know you're in for a good down-home soul-rinsing.  When he sings about having the "blues in the basement, me and all these rats," you can tell exactly where he's coming from:  "These blues in the basment, you can't get no lower than that."  But while every note he sings, every subtle rasp and inflection, drives straight to the marrow of the Memphis blues experience, Rufus Thomas isn't about to make this spectacular comeback album a trip down memory lane.  With the help of sympathetic production by Bob Greenlee, and backing from a group of gifted musicians that includes guitar hotshots Bryan Bassett and Ernie Lancaster and the renowned R&B saxophonist Noble "Thin Man" Watts, Rufus has fashioned a contemporary blues album that synthesizes the music's rich history into a tough, tight, modern sound.  You'll hear Count Basie-style horn riffs melding with Roy Brown-style shouting and James Brown-style funk.  There are rocking shuffles, feisty highstepping stomps, and downchild moans, cheek-by-jowl with stinging guitar and down-home harmonica.

"I can't teach you the blues," Rufus told a group of young musicians during rehearsals for a recent Stax reunion concert.  "You got to know them."  And no one in Memphis knows the blues better than Rufus Thomas.  THAT WOMAN IS POISON! is a stunning revitalization of the blues verities.  It's the testament of a fiercely energetic, ageless man.  Rufus Thomas is more than just the funky grandfather of Memphis R&B.  He's a national treasure.
---Robert Palmer
Robert Palmer is the author of Deep Blues and
other award-winning music books, and writes about
music in Rolling Stone and The New York Times.