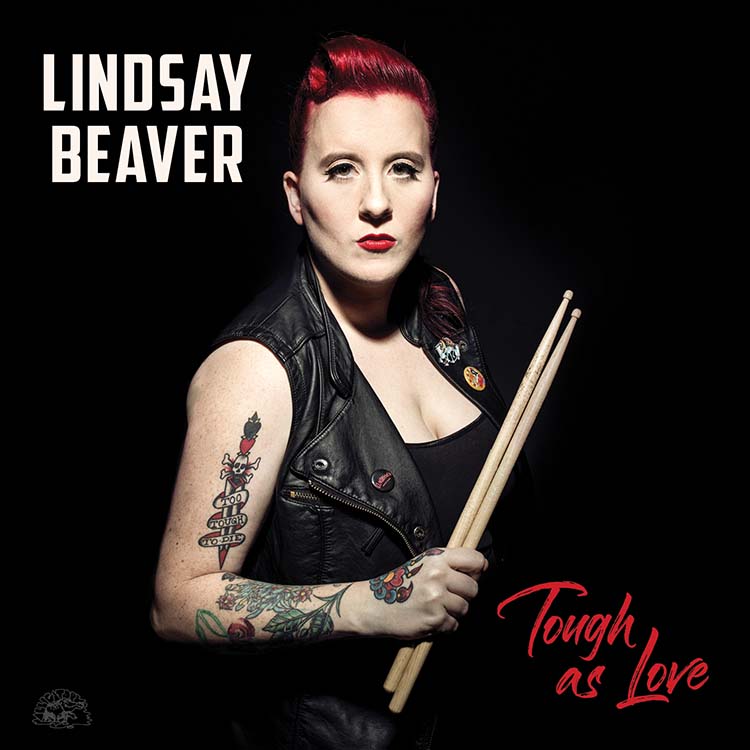 ORDER NOW! THE FIRST 300 WILL RECEIVE AN AUTOGRAPHED COPY AND A LINDSAY BEAVER BUTTON

All songs by Lindsay Beaver, SOCAN admin. by Eyeball Music, BMI, except as shown

The blues and its musical children—R&B, soul and rock ‘n’ roll—have become a true international language. In spite of that, I never expected to choose a female singing drummer from Halifax, Nova Scotia in easternmost Canada to be the newest member of the Alligator Records family. But when I heard Lindsay Beaver, I knew she was a talent that just couldn’t be denied.

Lindsay delivers blues, R&B and old school rock ‘n’ roll in a voice brimming with attitude and soulfulness. She’s described her music as “punk blues” but that’s too narrow a term. She comes at every song with urgent intensity, soul-baring emotion, a distinct swagger and a take-no-prisoners confidence. And she does so while standing (not sitting) behind her drum kit, driving each tune with her tough, less-is-more playing.

So how did this young woman from up north attract the attention one of the world’s premier roots music labels? By the combination of her indisputable talent and her utter determination to be heard, as well as by her all-encompassing musical vision. What other Alligator artist would name her life-changing inspirations as Billie Holiday, Queens of the Stone Age, Nick Curran, The Ramones, Little Richard, Amy Winehouse and Sam Cooke? As she says, “I really like music that has drive and passion. It’s not genre specific.”

Lindsay Beaver grew up in a working-class home in Halifax, surrounded by music. Her parents listened to everything. “I sang soul music my whole life,” she says. At age 11, she discovered Tupac Shakur and fell in love with hip hop. At 14, she heard Jimi Hendrix and then, in her words, “everything changed.” She bought a guitar and learned to play. But her musical direction was sealed at the age of 17. “It was the first Billie Holiday record I got. I heard her sing ‘Don’t Explain.’ It was a very heavy moment. Billie led me to lots of other jazz, and jazz led me to blues.”

After high school, Lindsay received a scholarship to train as a classical soprano. At the same time, she put together a small jazz band featuring her vocals. “My drummer didn’t want to keep bringing his drums over to my house for rehearsal,” she recalls. So my dad scraped together enough money to buy a drum set to keep in the house. As soon as I sat down at that set, I got it.” If Lindsay has a multitude of vocal inspirations, she has one key drumming inspiration—the immortal Earl Palmer, who recorded with everyone from Little Richard and Fats Domino to Frank Sinatra, the Beach Boys, Ray Charles and Elvis Costello. “He was the perfect drummer. He understood how to play for the song.”

At the age of 19, Lindsay first experienced Canadian blues icons the Garrett Mason Trio performing at a local club. “I’d been learning music my whole life, but the concept of making music my career hadn’t yet occurred to me. The first Garrett show I saw, the crowd was lined up down the street. Once we got in, people were everywhere and his trio was on fire. I thought then, 'I want to do that—have a band, actually be a real musician.' I went to the Sunday blues jam for the first time that weekend. But I didn’t tell any of the blues guys about my singing. I figured that if I told them that I sang, nobody would take me seriously as a drummer. So I did my jazz gigs in town singing and then would go to the blues jam as a drummer.”

With the encouragement of her drum teacher, Lindsay applied to music school in Toronto to study jazz drumming. “I barely got in. All I could do was shuffle really well. I wasn’t good enough for a scholarship; I’d only been playing for a year when I applied.” While studying drumming she played and sang in local bands, but quickly realized she had her own musical statement to make. At the age of 24, she founded the 24th Street Wailers, leading the band from behind the drum kit and singing her own originals as well as carefully-chosen covers. She explains, “When I first started out with the band, I couldn’t find a singer I liked and I couldn’t find a drummer I liked, so I decided to do both.” She and the band began making a name for themselves in Toronto and across Canada. Over the course of the next few years, the band cut five albums, three produced by Lindsay, even winning a nomination for a Juno Award (the Canadian Grammy).

Soon she attracted the attention of Texas guitar legend Jimmie Vaughan. “I opened for him in a small town in Ontario. He really dug the band and we got to be friends. After that, when he would come to Canada he’d invite us to his shows. He told me about how much I’d like the Austin music scene and I came down to check it out and kept coming back.” She began sitting in around town, and finally moved to Austin in 2018. She’s definitely established her reputation there, as witnessed by the terrific Austin musicians who chose to appear on the album, including fiery guitarist Brad Stivers and rock-solid bassman Josh Williams (both now in her touring band), plus pianists Marcia Ball and Matt Farrell and guitar ace Eve Monsees.

Lindsay Beaver has already played across the U.S. and Canada and toured Europe multiple times. Now she’s ready for the next giant step in her career--her first album under her own name. It’s proof that no matter where she comes from and how unlikely her story, she can deliver a song with so much honesty, passion and soul that her impact is undeniable.