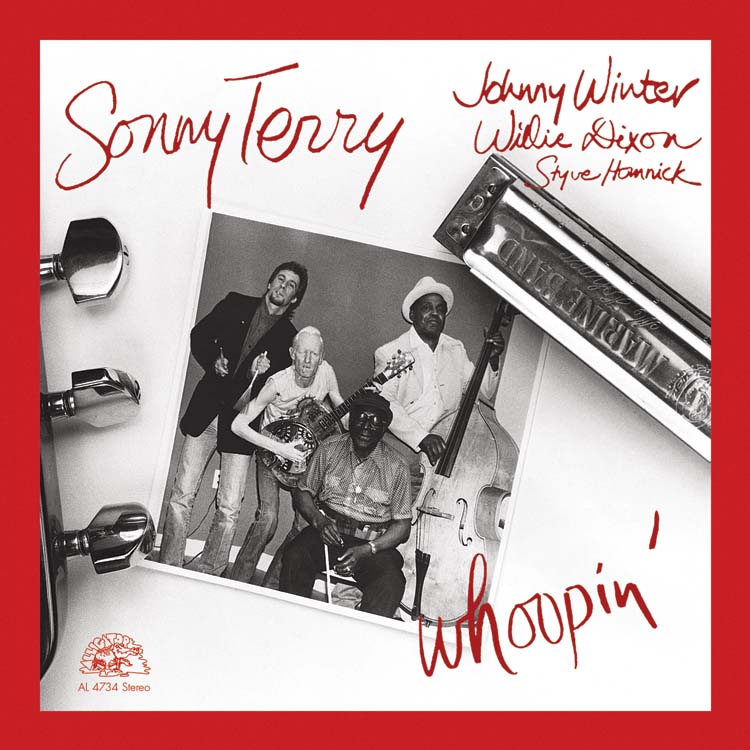 With Johnny Winter and Willie Dixon. The master of country blues harmonica met the super-hot guitarist and the great blues bassist in a terrific supersession produced by Johnny Winter. "A gritty and exuberant romp"--NEW TIMES

His career has spanned more than sixty years, from playing for tips on the street to headlining major concert halls worldwide.  His sound is uniquely his--the gorgeous, warm tone, the driving rhythm, the amazing control, the guttural voice, and of course the trademark falsetto "whoop."  Sonny's music has carried him literally around the world--from his teenage years in North Carolina playing with Blind Boy Fuller, to his electrifying New York debut at John Hammond's famous 1938 "Spirituals To Swing" concert, to the cast of the Broadway show "Finian's Rainbow," to forty years of touring on the international folk festival circuit with his long-time partner, Brownie McGhee.  Sonny Terry and Brownie McGhee may well have appeared before more audiences, in more countries, than any other blues musicians.

Sonny has made countless records, mostly with Brownie but also with other bluesmen like Leadbelly, Lightnin' Hopkins and Big Joe Williams, with folk singers like Woody Guthrie, even with a full-tilt rock band.  He's one of the most-recorded bluesmen ever, but he's never done an album quite like this one.  Here's how Johnny Winter tells it--

"Back when the blues was being called folk music, Sonny Terry and Brownie McGhee were some of the first people recorded, and they were one of the first country blues harp and guitar duets I heard.  I loved them, but I always felt like Sonny was never quite in his element.  Brownie's a great guitar player but he has that mellow, pretty Carolina style and Sonny's voice was always more raspy--it had a lot of the Mississippi Delta quality to it.  So when Sonny asked me if I'd produce an album with him, I tried to make a record with a lot of Delta feel to it, like we had cut the record in Mississippi.  That's why I played a lot of slide on it.  We had to get just the right people to get that Delta sound--Willie Dixon because all of us had worked with Willie before, and Styve because he was Sonny's regular drummer at the time and knew how to follow Sonny's every move.  There's no getting Sonny to follow you--you got to follow him.  That was my job as a producer--to find people who fit in with the artist's natural style, not try to change it."

"Like most blues records, it took us three days to cut.  The first day was just jamming with Sonny, getting used to playing together.  The recording part went really fast; there were a lot of first takes.  After we'd know what Sonny was going to do it was really easy to record, and Sonny was just loving it.  He told me this was his favorite record, and it sounds more like I pictured Sonny sounding--it was just putting him in his element."

Sonny Terry and Brownie McGhee split up a couple years ago, and Sonny is semi-retired right now.  He still plays at home with friends like Johnny Winter, and makes occasional concert appearances.  And whenever he picks up that harmonica, it's obvious that his chops and his voice and that famous "whoop" are every bit as powerful as they were sixty years ago.
--Bruce Iglauer