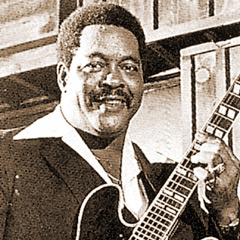 Harvey, Illinois is a quiet Chicago suburb, with modest homes and tree-lined streets. It’s a far cry from the battered urban landscape of the South and West Side ghettos, and it seems an unlikely place for the raw sound of the blues to be popular. But Andrew Brown rocked roadhouses, clubs and V.F.W. halls around Harvey and Chicago’s other southern suburbs from the late 1950s until his death in 1985. His big, robust voice and fluid guitar lines reflected the styles of the blues and soul men who were popular when he was first playing around the city—the Kings, Bobby Bland, Little Milton and Tyrone Davis. But Andrew absorbed, not copied, their styles. With his son Spurling on bass and Otis Webster on second guitar, Andrew belted out the blues with the best of them.

Andrew was a journeyman musician, and his repertoire extended into jazz, ballads, gospel and soul. His versatility allowed him to take gigs playing organ and alto sax, as well as guitar. A weekend might have found him working in a jazz organ trio in a cocktail lounge on Friday, squeezed into a tuxedo singing soul ballads at a formal black social club dance in a hotel ballroom on Saturday, and pumping out rocking guitar blues in a basement bar on Sunday.

Born in Jackson, Mississippi on February 25, 1937, Andrew discovered he had talent as a guitarist when he was very young. Before leaving Jackson, he had jammed with Joe Dyson’s popular big band, and even played with Charlie Parker! Coming to Chicago, he fell in with his contemporaries Magic Sam and Freddie King, playing West Side taverns. But he also backed soul singer Denise LaSalle and worked in Baby Face Willette’s organ combo.

As with his friend Magic Sam, the Army snatched up Andrew just as he was really beginning to come into his own musically. He returned home in 1962, a more sober and serious man. He got a job in a steel mill, bought a home in Harvey, and settled down to suburban respectability. His only vice was a penchant for street drag racing, which ended when he flipped an Edsel across a lawn and ended up upside down in the car in someone’s living room.

His musical career continued sporadically. He recorded his first single, the classic “You Better Stop” for the U.A. label in 1962, and later 45s for the Four Brothers label, including the outstanding “You Ought To Be Ashamed.” But nothing really happened with his records, and, although he cut as a sideman with Jimmy Johnson and Denise LaSalle, Andrew didn’t get back into the studio until 1973. Then he had to finance the session himself. In half an hour (all the studio time he could afford), Andrew cut four sides, including a superb version of James Davis’ “Blue Monday” which was later released on Brave. As with his earlier singles, the music was aggressive but the record promotion wasn’t, and Andrew resigned himself to a career in the steel mills.

During the ‘70s, Andrew paid more than his share of dues. First, he suffered a heart attack. Later, he permanently injured his back working as a lifter at the mill, and lay in traction for months. It took years to reach a financial settlement, while the mill had to hire two men to replace him! As a result of his inability to work at heavy labor, Andrew returned to his music with more determination. He gigged in East Chicago, Indiana, in Markham, Illinois, and at South Side jazz clubs like El Panama and All That Jazz. “Big Brown” (as he was known) made his North Side debut at a benefit concert at The Wise Fools Pub. Here, fans were amazed to discover a major blues talent who had been living in obscurity only thirty miles to the south.

Andrew recorded his first album tracks for Alligator’s Living Chicago Blues series in 1979. The exposure won him a following in Europe, and he went on to record two albums for European labels, Big Brown’s Chicago Blues on Black Magic Records and On The Case on Double Trouble Records, both produced by long-time friend and fan Dick Shurman. Andrew died of cancer in 1985, just as he was beginning to receive recognition as a major blues artist. 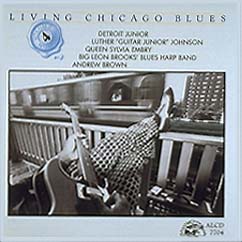