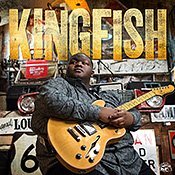 Is Christone “Kingfish” Ingram the future of the blues? The blues savior is one of the most exciting young guitarists in years, with a sound that encompasses B.B. King, Jimi Hendrix and Prince.
–Rolling Stone

Kingfish is the next explosion of the blues.
–Buddy Guy

Wednesday, December 11, 2019 -- NPR Music has named Kingfish -- the groundbreaking debut CD from Christone "Kingfish" Ingram -- as one of the Best Debut Albums Of 2019. According to NPR Music writer Tom Moon, "On his blazing Kingfish, this Clarksdale, Miss. native smacks [the blues] to life, by singing like an ornery road-weary elder (he turns 21 in January), and playing guitar leads with a dramatic, searing tone and sure-handed authority. And that's just in the studio; he's even scarier live." The album, released in May 2019, is currently nominated for a Grammy Award. Tastemaker UK music magazine MOJO named Kingfish the #1 Blues Album of 2019.

Since the release of his debut album Kingfish, 20-year-old Clarksdale, Mississippi native Ingram has gigged nonstop and has been featured in newspapers, magazines, and on radio and television. Within the last few months, Ingram has played shows across the U.S.A., including dates with Buddy Guy, Vampire Weekend and Jason Isbell, as well as headlining his first-ever national tour, dubbed Fish Grease: A Juke Joint Tour. He will launch his follow up tour, Fish Grease 2, this January. Kingfish debuted at #1 on the Billboard "Blues" and "Heatseekers" charts and continues to receive regular airplay on radio stations around the world. He was recently interviewed by Sir Elton John on John's Apple Beats podcast.

With his eye-popping guitar playing and his reach-out-and-grab-you-by-the-collar vocals, Kingfish delivers each song with unmatched passion and precision. Steeped in the rich, vivid history of the blues, he’s driven by his burning desire to create contemporary blues music that speaks to his generation and beyond. Kingfish is inspired by the music of Robert Johnson, but dreams of one day collaborating with Kendrick Lamar and soul-funk bassist Thundercat. “My core is blues,” he says, “but it’s important for me to create a sound and style that is uniquely my own. I have a lot to say, so please stay tuned.”