“Mighty and joyous rock-injected blues...luxurious vocals and fine guitar work. Her voice is as muscular as her name is evocative.”
—Austin Chronicle

“Carolyn Wonderland is the real deal. She’s an amazing guitar player. And damn, can she sing.”
—Los Angeles Times

“Hey, have you heard Carolyn Wonderland? She’s something else. She should be nationwide.”
—Bob Dylan, talking to Asleep At The Wheel's Ray Benson 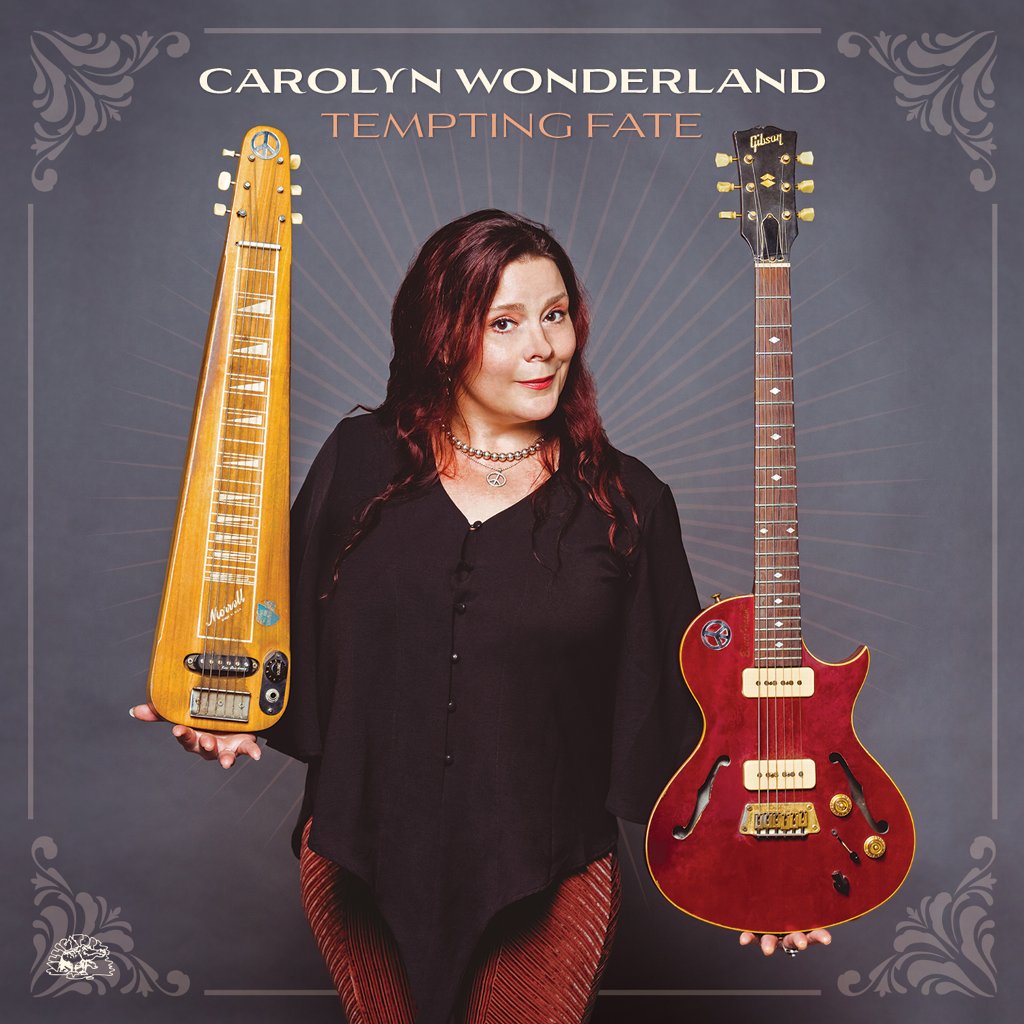 Award-winning Texas guitar slinger, singer, songwriter, and multi-instrumentalist Carolyn Wonderland will release her Alligator Records debut album, Tempting Fate, on Friday, October 8. The album, produced by famed master roots musician Dave Alvin, is the next chapter in Wonderland’s remarkable career, one that is already overflowing with countless, colorful, once-in-a-lifetime experiences. She spent the last three years as lead guitarist in blues legend John Mayall’s Blues Breakers, and has now joined the Alligator Records family as the first female guitar hero in the label’s storied 50-year history. But that's not all. Her spine-chilling, soul-deep singing matches her guitar prowess note for note. And she has a knack for writing songs that sound like instant classics.

Wonderland has been performing professionally since the age of 15. Her music is a bold mix of timeless original songs and reinventions of some of her favorites, ranging from blistering electric blues to deep, heartfelt ballads to cosmic country to soulful Tex-Mex. Every song is fueled by Wonderland’s forceful yet melodic Texas-flavored guitar work and her full-throated, heart-on-her-sleeve vocals.

Tempting Fate is Wonderland's 11th album, and it finds her delivering ten riveting songs, including five fiery originals and one co-write. Her vocals range from raw and fierce to subtle and gentle. Her guitar work, on both six-string and lap steel, is often explosive and always melodic. According to Dave Alvin, "Carolyn is unique, strong, soulful and sincere. She can pick and belt out the blues with the best of them, but her powerful, melodic vocals and six-string stylings are truly her own. Traditional yet innovative, tough yet tender, Carolyn always sounds like no one else but herself."

On every song—from the searing, guitar-heavy Broken Hearted Blues to the tender and poignant Crack In The Wall to the very Texan love song for her boot collection, Texas Girl And Her Boots, to the politically-charged Fragile Peace And Certain War to the take-no-prisoners version of the Grateful Dead’s Loser—Wonderland throws herself completely into the music. Her shining duet with Texas singing/songwriting legend Jimmie Dale Gilmore on Bob Dylan’s It Takes A Lot To Laugh, It Takes A Train To Cry redefines the song. Her explosive guitar work and commanding vocals on John Mayall’s The Laws Must Change makes his song hers.

In addition to her longtime road band—bassist Bobby Perkins and drummer Kevin Lance—who anchor every song, guests on Tempting Fate include Jimmie Dale Gilmore on vocals, Cindy Cashdollar on lap steel guitar, Marcia Ball on piano, Shelley King on background vocals, Jan Flemming on accordion and Red Young on organ and piano, with producer Dave Alvin playing guitar on three songs. “The joy was palpable, getting to play with my friends and heroes at Stuart Sullivan’s studio, and Stuart captured that joy in the recording. You can hear the smile on my face and tear in my eye on every track. And everyone sat up straight for Dave Alvin, who had great ideas as our producer.”

Wonderland has been a road warrior for over 20 years. She’s played all over the U.S. and in Canada, Mexico, Brazil, Panama, the Netherlands, Belgium, Germany, Spain, Italy, Austria, Slovenia, Canary Islands, Norway, Sweden, Finland, and Japan. In 2018, venerated musician and bandleader John Mayall chose Wonderland to be lead guitarist in his band, The Blues Breakers. She became the first woman ever to hold that position. (The all-star list of Mayall’s legendary guitarists includes Eric Clapton, Mick Taylor, Peter Green, Coco Montoya and Walter Trout.) She toured the world with Mayall, once playing 50 shows in 60 days in 19 countries. She recently left the band to tour in celebration of her new Alligator album.

Carolyn Wonderland was born in Houston, Texas and grew up in a house full of music and instruments. She first started playing guitar at age six. After she scratched up her mother’s vintage Martin guitar by imitating Pete Townsend’s famous windmill move, she was forbidden from using a pick. Because of that, she developed her aggressive, distinctive finger-picking guitar attack. Her early influences include her mom, Houston guitar legends Albert Collins, Jerry Lightfoot, Little Screamin' Kenny and Joe “Guitar” Hughes, as well as blues and soul vocalist Lavelle White. Singing came naturally, as did learning to play just about every instrument she got her hands on. She plays trumpet, accordion, lap steel, piano, and mandolin.

With four albums already under her belt, Wonderland moved to Austin, Texas in 1999, where she quickly earned a large and loyal following, creating plenty of press buzz and radio attention. Then one day in 2003, legendary musician Ray Benson (of Asleep At The Wheel) was having lunch with his friend Bob Dylan, who had heard Wonderland’s music. Dylan asked Benson, “Hey, have you heard Carolyn Wonderland? She’s something else.” Dylan wanted to meet Wonderland, so Benson got her number from a mutual friend and called her in Houston, telling Wonderland to get to Austin immediately to meet with Dylan. She drove the 165 miles at record speed to spend some time with him. They’ve crossed paths since, sometimes jamming, sometimes just talking about music (“He’s a true musicologist,” she says of Bob). “Sometimes he’ll just call,” Wonderland says.“It's always a pleasant surprise to me when he does, so I’ll likely never change my number.”

Benson went on to produce Wonderland’s next four albums, all critically acclaimed fan favorites. According to Benson, “Carolyn’s got that unbelievable, incredible voice, one of the great voices of our times. She’s got the range, the emotion. She’s also an incredible guitar player and a great person. The combination is disarming and totally real. That’s magic.”

The Boston Herald describes Carolyn as “a dollop of Janis Joplin, a slice of Stevie Ray Vaughan, and a big load of soulful individuality. That’s Wonderland, a seething-hot Texas singer-guitarist. And she can write, too.” Now, with Tempting Fate and a major tour in the works, Carolyn Wonderland is excited to get back out on the road and reconnect with her fans and friends. “We will play dang near anywhere that’ll have us,” she says. Of her chosen profession, the effervescent Wonderland told NPR Music’s Mountain Stage, “I wouldn’t recommend it for the faint of heart, but it sure is a good time.”