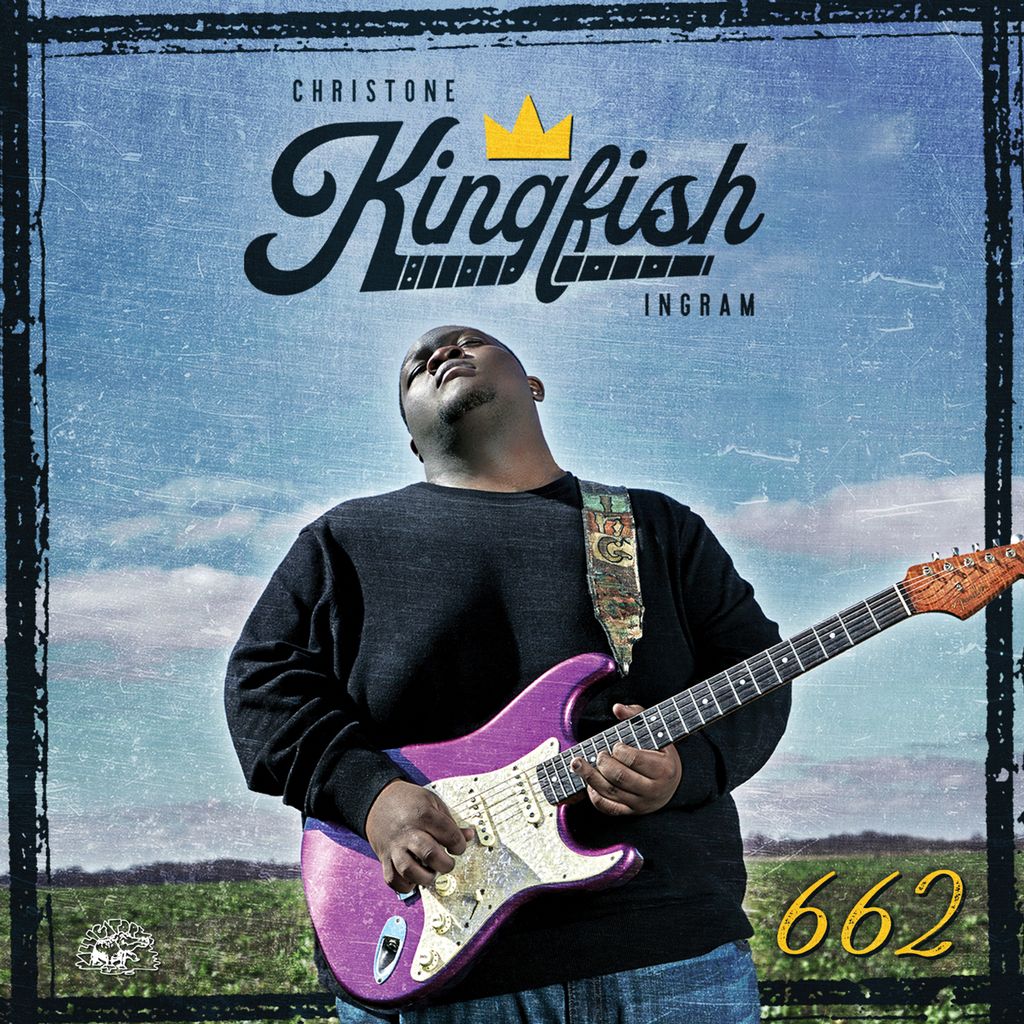 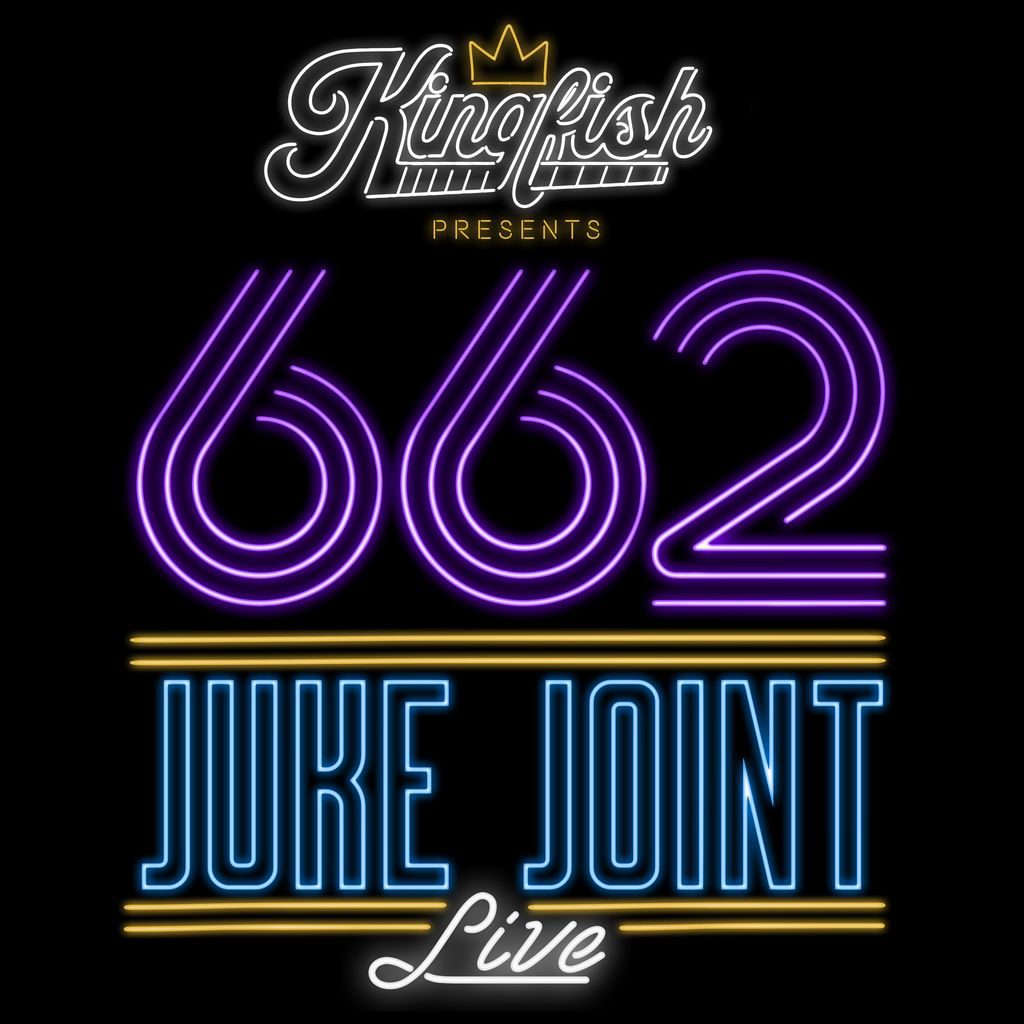 Christone "Kingfish" Ingram has already made his mark as one of the best, and undoubtedly most exciting, blues guitarists in the world.
—Guitar World

Today, Thursday, January 27, Clarksdale, Mississippi's own Christone "Kingfish" Ingram announced the stellar lineup of support acts for his 2022 tour in support of his Grammy-nominated, critically and popularly acclaimed Alligator album, 662. Entitled Christone "Kingfish" Ingram Presents 662: Juke Joint Live, the tour is a partnership with Nashville-based Outback Presents, and will take the 23-year-old guitarist, vocalist and songwriter across the country with dates beginning March 2022 and going through May. The four genre-trailblazing announced artists (who will each open selected shows) are Rissi Palmer, Camille Parker, Maggie Rose, and Brittney Spencer.

“I’m very excited to have these four incredible musicians join me for 662: Juke Joint Live. I have listened to their music and followed their success for some time now,” says Kingfish. “I think each of us have expanded the definition of our respective genres and we have been fortunate to receive support from the Americana music community. I’m quite confident fans will really enjoy what we will bring to the live stage."

Rissi Palmer is a multi-hyphenate, multi-talented singer, songwriter, radio host, and curator who has been on the scene since 2007, when she released her successful self-titled debut album.  Palmer’s gift lies in reaching across all musical boundaries. While she made her mark in country music, she is equally at home in R&B music, bringing the entire spectrum of popular music to bear on music she calls “Southern Soul.” Palmer’s most recent album, Revival (2019), was critically hailed as her most personal and uplifting work to date. She is currently writing new music. As a radio host of Apple’s Color Me Country, she gives a vital platform to country musicians of color and lifts their voices as she explores the genre’s Black, Indigenous and Latino origins.

Palmer says of touring with Kingfish, “I can’t even begin to describe how excited and grateful I am to head out on the road with Christone. The level of musicianship of Kingfish is through the roof and my band and I can’t wait to take this live experience straight to the people.”
More about Rissi Palmer: https://rissipalmermusic.com/

Camille Parker is a genre-defying singer-songwriter blending the tradition of country songwriting with modern influences spanning R&B and pop. Recently announced as one of the CMT’s Next Women of Country Class of 2022, Parker has been described by fellow country singer Mickey Guyton as “the future.” Her vocal delivery is vulnerable yet rich and agile, and she attributes her deeply honest and relatable approach to songwriting to musical influences such as Dolly Parton, D’Angelo, Bonnie Raitt and Rihanna. Her single The Flame is out now.

Parker says, “I am so excited to be joining Kingfish on the road this spring. He’s an artist I truly admire and I’m looking forward to sharing my music with his amazing fans.”
More about Camille Parker: https://www.iamcamilleparker.com

Maggie Rose is a Nashville-based singer/songwriter who dreamed up her own unbridled collision of rock and roll, soul, folk, funk, and R&B for her third studio album. Have a Seat was produced by Ben Tanner of Alabama Shakes and came to life at the iconic FAME Studios in Muscle Shoals, Alabama. Have A Seat found Rose approaching her music with more confidence and clarity of vision than ever, ultimately sharing a selection of songs both timeless and urgent and appropriately named one of the  "Best Albums of 2021" by both Rolling Stone and American Songwriter, while NPR’s World Cafe called Rose “a multi-genre powerhouse…a must see act,” and Garden & Gun hailed her “an artist at the top of her craft.”

Rose says of this announcement: “I am incredibly honored to join a musical talent like Christone and get in front of his fans on the 662: Juke Joint Live Tour,” says Rose. “I feel privileged to be invited along for such a great experience in these beautiful theaters and I know that together it will make for a powerful and dynamic night of music.”
More about Maggie Rose: https://www.maggierosemusic.com/

Deemed “Nashville’s new star” by CBS This Morning, breakout newcomer Brittney Spencer is paving her own path in the country music genre and making major waves in the process. A People magazine “Hollywood One to Watch," Spotify Hot Country Artist to Watch, Pandora Artist to Watch and member of CMT’s 2022 Listen Up Artist class,  the Baltimore native is known for her free spirit and standout ability to mold life, truth and wild imagination into songs. Her recent single Sober & Skinny has garnered praise from The New York Times, Rolling Stone, and more, including earning her the cover of Nashville Scene’s 2021 Year in Music Issue. Spencer will release new music this spring.

Spencer says, “I’m so excited to join Kingfish for the west coast leg of his Juke Joint tour! Our shared love for music and performing has caused our not-so-distant musical worlds to collide in the best way. I suspect it’ll be a magical time.”
More about Brittney Spencer: https://shorefire.com/roster/brittney-spencer

Andrew Farwell, Vice President, Outback Presents, says "We are so honored to work with these incredible artists. It’s a wonderful opportunity to reach new audiences, bringing unbridled talent and musicianship to the masses. Combining these unique points of view with Christone’s virtuosic tenacity will make for an unforgettable live concert experience.” 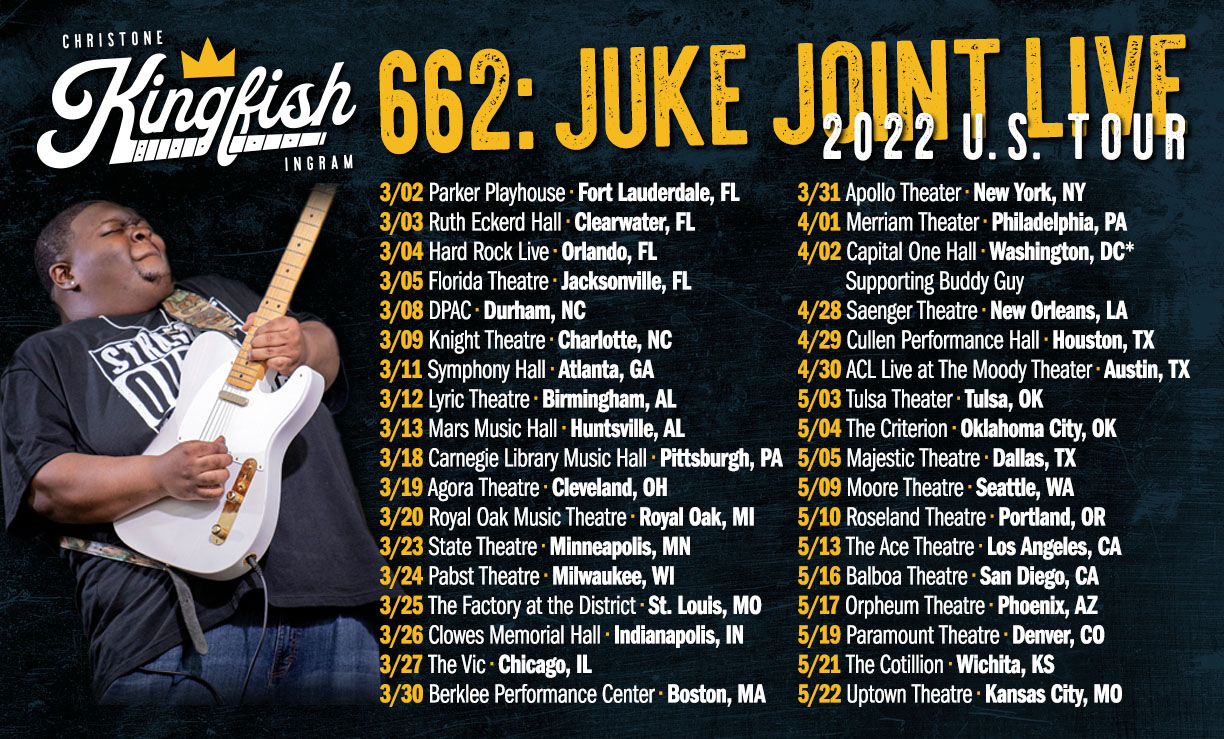 Upon its July 2021 release, 662 (named for the telephone area code of Ingram's northern Mississippi home) debuted at #1 on the Billboard Blues Chart, and it's remained on the chart ever since. NPR's Morning Edition ran a seven-minute feature on release day. Tastemaker UK magazine MOJO named 662 the #1 Best Blues Album of 2021 calling it "an exceptional album" filled with "astonishing creativity." Influential website Under The Radar said, "Kingfish is one of the torchbearers for the blues."

On radio, 662 quickly became one of the biggest contemporary blues crossover albums of the year, receiving massive airplay on NPR-affiliated stations and SiriusXM. 662 also topped numerous radio format charts, cracking the top 20 on the North American College and Community Chart (and hitting #1 on its Blues Chart). It spent three months at #1 on the influential Living Blues Radio Chart, and also excelled on both Nielsen's Adult Album Alternative Chart and The Americana Music Association’s Singles and Album Charts. Additionally, 662 appeared at or near the top of the major international blues charts in Australia, France and the UK.

662 was recorded in Nashville and co-written and produced by Grammy-winner Tom Hambridge. It features 13 songs (and one previously released bonus track) displaying many sides of Ingram’s personality, as well as his one-of-a-kind guitar and vocal skills. According to Ingram, "662 is an ode to my roots, a nod to the area where I was born and raised. The title track, 662, encompasses how a small corner of the earth influenced my view of life and music. It also points to the growth I have had since my debut album. As much as I have been fortunate to get 'Outside Of This Town' (the title of his breakout single from his 2019 Grammy-nominated debut album, Kingfish), I do want people to know that the '662' will always be a major part of who I am."