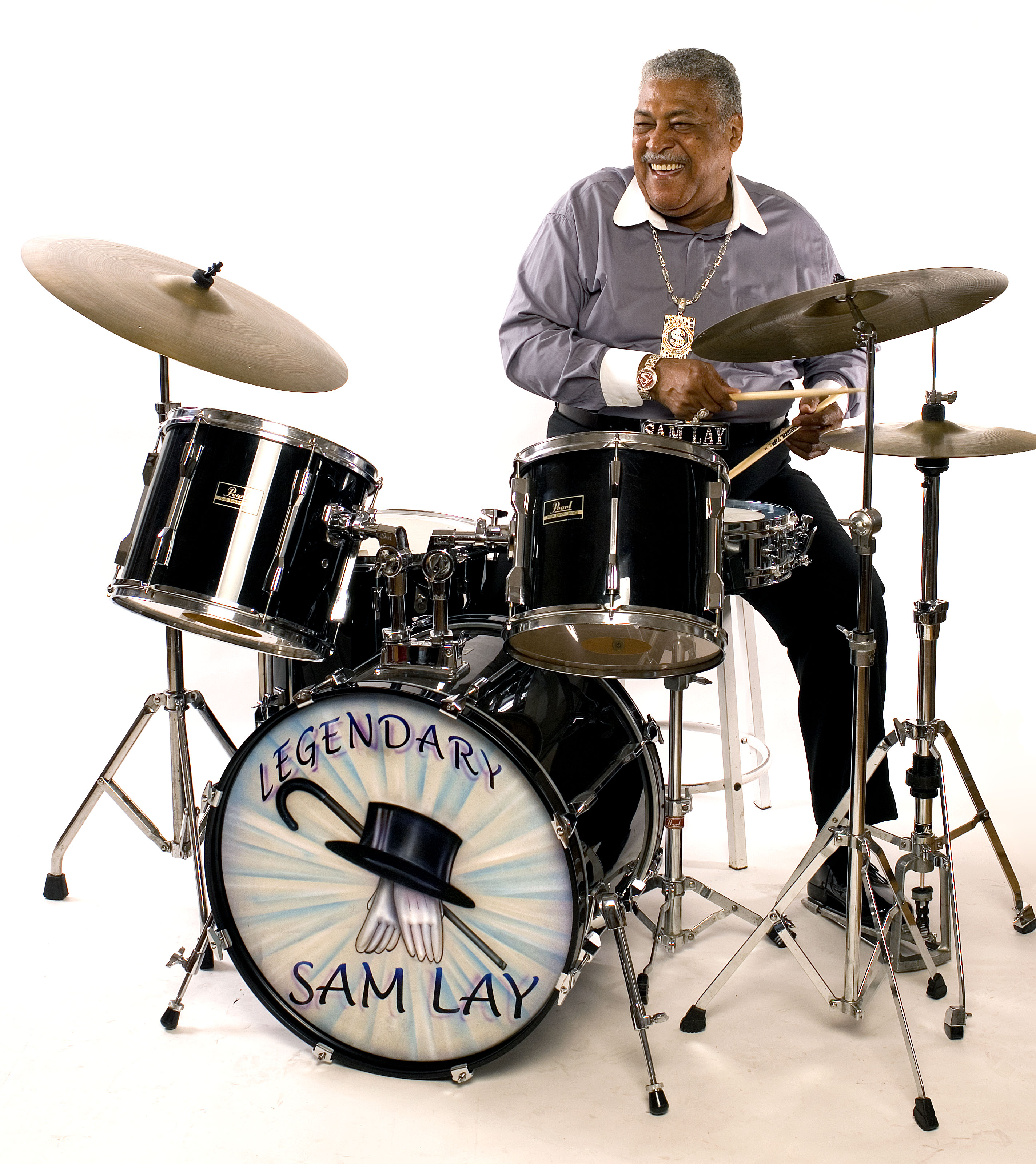 Walter, Wolf and Muddy, they must have known it, too – that you're second to none – your flawless musicianship and unsurpassed timing, a maestro with the sticks and brushes.
–Bob Dylan

Almost without any argument one of the most influential and greatest drummers in the history of popular music. Lay is the real thing.
–The Chicago Tribune

Famed Chicago blues drummer and vocalist Sam Lay – who recorded on definitive tracks by Howlin' Wolf, Muddy Waters, Bob Dylan and many others, as well as recording with and leading his own band – died in a nursing facility near his Chicago home from natural causes on Saturday, January 29, 2022. Beloved for his talent, his buoyant and outgoing personality, as well as for his sense of style (he was known for his cape and walking stick), Lay was among the most historically significant and musically innovative drummers in both the early blues and rock 'n' roll scenes. Lay is an inductee to the Rock 'n' Roll Hall Of Fame, The Blues Hall Of Fame and The Jazz Hall Of Fame. He was 86 years old.

Lay has always been renowned for his trademark, hard-to-copy "double-shuffle" – based on the double-time hand-clapping from his childhood church. In addition to his work with Howlin' Wolf and Muddy Waters, Lay was an original member of the hugely influential, racially integrated Paul Butterfield Blues Band, among the first groups to bring hard Chicago blues to the burgeoning rock and roll audience. He recorded on the band's groundbreaking debut album, featuring guitarists Mike Bloomfield and Elvin Bishop. Along with members of the Butterfield Band, Lay backed Bob Dylan at the 1965 Newport Folk Festival, as Dylan famously plugged in his electric guitar, forever changing the course of popular music. Dylan chose Lay to play drums on the title track from his Highway 61 Revisited album. Lay can also be heard on scores of blues recordings by legends including John Lee Hooker, Bo Diddley, Magic Sam, Earl Hooker, James Cotton, Lightnin' Hopkins and many others.

Born in Birmingham, Alabama in 1935, Lay first played professionally in Cleveland in the mid-1950s before heading to Chicago and backing the legendary blues harmonica genius, Little Walter. Lay next joined Wolf's band, with whom he recorded on some of the blues' most iconic songs, including Killing Floor (which features Lay's often-imitated, never-duplicated drum pattern), I Ain't Superstitious, The Red Rooster, Goin' Down Slow, and 300 Pounds Of Joy. In the mid-1960s, Lay joined the Paul Butterfield Blues Band. In 1969, Lay drummed on Muddy Waters' famous Fathers & Sons LP, Waters' best-selling album on Chess.

Lay first recorded under his own name in 1969 with Sam Lay In Bluesland, on Blue Thumb Records. He recorded six more albums as a leader (most recently in 2003) and fronted his own internationally touring band. He recorded two albums as a member of The Siegel-Schwall Band for Alligator Records, and continued to work and tour with the band for the rest of his career. According to Siegel-Schwall band leader Corky Siegel, "As Charlie Musselwhite always says, 'Sam does not just play the drums. He sings them.'"

Lay was nominated for a Grammy Award in 1998 for his performances on the Tribute To Howlin' Wolf album on Telarc. He was further honored by the Chicago Chapter of The Recording Academy in January 2002 with a coveted "Legends and Heroes Award" for his significant musical contributions. At this event, Lay's old friend Bob Dylan sent a telegram, stating in part, "It's so well-deserved. Walter, Wolf and Muddy, they must have known it, too – that you're second to none – your flawless musicianship and unsurpassed timing, a maestro with the sticks and brushes."

Lay appeared during the seven-part 2003 PBS-TV broadcast of The History of the Blues produced by Academy Award winning director, Martin Scorsese. He was the subject of a 2015 documentary film entitled Sam Lay In Bluesland, directed by John Anderson. The film features Sam telling his story in his own words and music, and includes appearances by music greats Iggy Pop, Corky Siegel, Elvin Bishop, and late blues harmonica giant James Cotton. It also includes historic 8mm performance films that Sam personally shot, many of which were recorded at some of Chicago's most storied blues clubs.

Lay is survived by daughter Debbie Lay (Hiley), four grandchildren, three great-grandchildren and a host of nieces, nephews and friends.