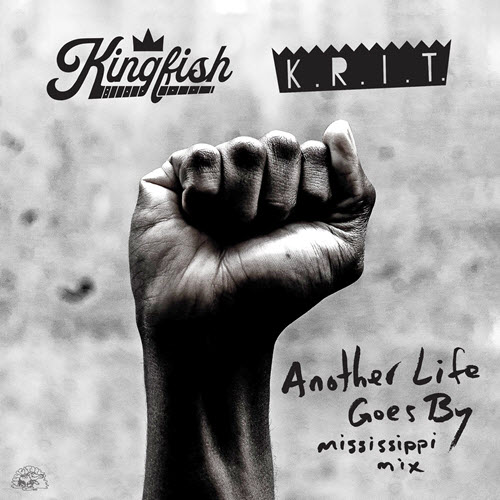 “Kingfish is one of the most exciting young guitarists in years, with a sound that encompasses B.B. King, Jimi Hendrix and Prince.”
—Rolling Stone

"Big K.R.I.T. is a different sort of Southern traditionalist...understated and wonderous [with a] strong moral center...thoughtful and introspective." —New York Times

NPR's World Cafe exclusively premiered the song (found in its original form on Kingfish's Grammy Award-winning Alligator Records album 662) on October 4, airing the track on over 250 radio stations nationwide. Bruce Warren, Executive Producer of World Cafe, which originates from Philadelphia-based WXPN-FM, loves the collaboration, saying, "When Kingfish meets Big K.R.I.T. on Another Life Goes By, lyrical and guitar sparks explode on this new take on one of Kingfish’s most reflective songs. K.R.I.T.’s verse gives the song a masterful sense of urgency with its societal commentary, balanced with Kingfish’s incredible guitar playing."

The pairing with Big K.R.I.T. was organic, as both artists share their Mississippi upbringings with similar musical tastes and a fanbase that is committed to both artists. Of Kingfish's musicianship, No Depression says, "Ingram has no fear. His music transcends. [This is] the unveiling of a new and innovative path alongside a well-traveled Delta highway." XXL magazine declares K.R.I.T. "one of the most lauded Southern poets of his generation...One of Rap's most resilient M.C.'s."

“This is a very personal track for me as the message in Another Life Goes By speaks to contemporary issues many people face,” says Ingram. “For K.R.I.T. to add his Southern flavor, further cementing the deep meaning of the song, is really special. I appreciate him joining me on this one.”

Since the release of Kingfish, his Grammy-nominated 2019 Alligator Records debut, and 662, his 2021 Grammy-winning sophomore album, guitarist, vocalist and songwriter Christone “Kingfish” Ingram has become the defining blues voice of his generation. From his hometown of Clarksdale, Mississippi to stages around the world, the 23-year-old has already headlined three U.S. tours, performed at Australia’s largest music festival, amazed fans across Europe and the UK, and was selected to open for The Rolling Stones in London’s Hyde Park. Kingfish has also performed with friends including Vampire Weekend, Jason Isbell and Buddy Guy, with whom he appeared on Austin City Limits.

In July 2021, NPR’s Morning Edition featured Kingfish in a seven-minute story broadcast to its 14 million listeners. In April 2022, Kingfish made his national television debut on CBS Saturday Morning, performing three songs as well as being featured in an in-depth interview segment. Parts of the interview were recorded at New York’s legendary Apollo Theater, where Kingfish headlined.

As soon as 662 dropped on July 23, 2021, fans, critics, and radio stations showered the album with praise. Like his 2019 debut Kingfish, the album debuted at #1 on the Billboard Blues Chart. The title track made its world debut on SiriusXM's Bluesville and Kingfish appered on NPR’s World Café. 662 became a Today's Top Tune for radio station KCRW. MOJO selected 662 as the Best Blues Album Of The Year, while NPR Music said Ingram’s playing is “astounding…it’s almost like he’s singing through the guitar.”

662 won the Grammy Award for Best Contemporary Blues Album, won the Blues Music Award for Best Blues Album, and topped both the DownBeat Critics’ Poll and the Living Blues Critics’ Poll. Since his 2019 debut, Kingfish has been nominated for a total of nine Blues Music Awards and has won them all. He’s also won nine Living Blues Awards and his momentum has continued to build. In July 2022, The Washington Post Magazine ran a 5000-word story on the young musician. Kingfish simultaneously appeared on the cover of Guitar World magazine, where the publication exclaimed, “Christone "Kingfish" Ingram has already made his mark as one of the best, and undoubtedly most exciting, blues guitarists in the world.”