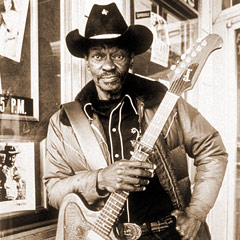 Brown started crossing boundaries -- both musical and geographical -- at a very young age. He was born in 1924 in Vinton, Louisiana and raised in Orange, Texas. He learned guitar and fiddle from his father, a strong multi-instrumentalist who taught his son to play Texas fiddle music, traditional French tunes and even polkas. Gate began his professional career at the age of 21 as a drummer in San Antonio.

In 1947, Gate was in the audience at the Golden Peacock nightclub in Houston, when famed guitarist T-Bone Walker took sick and dropped his guitar onto the stage in the middle of a number. Gate leaped to the stage, picked up Walker's axe and laid into one of his own tunes, "Gatemouth Boogie." T-Bone was not amused by the young upstart, but the crowd went wild, tossing $600 at Brown's feet in 15 minutes.

That stunt also got the attention of the club's owner, a Houston businessman named Don Robey. Robey hired Gate to play the club and eventually became his manager. He teamed Gate with a swinging 23-piece orchestra and booked him into venues across the South and Southwest. Gate made his first records for Hollywood's Alladin Records in 1947. When Alladin's promotion and release schedules didn't live up to expectations, Robey founded Peacock Records as an outlet for Gate's music. Dozens of Brown's records, including "Okie Dokie Stomp," "Boogie Rambler," "Just Before Dawn" and "Dirty Work At The Crossroads," became big hits. Beginning with Gate's hits, in a few years Peacock grew to become a major independent r&b record label, with an artist roster that included stars like Bobby "Blue" Bland, Junior Parker and Joe Hinton.

In the '60s, Gate moved to Nashville to take part in a syndicated r&b television show called "The Beat," which was hosted by local radio personality Hoss Allen. While in Nashville, Gate also recorded a series of country singles.

During a brief hiatus from music in the late sixties, Gate moved to New Mexico and became a deputy sheriff. It wasn't long, however, before he was drawn to Europe by a newly developing blues audience there. In 1971, he travelled to France for his debut tour of that country. During the '70s he toured Europe nearly a dozen times and recorded a total of nine European albums. The best cuts from three of those albums were later released in the U.S. by Alligator Records as PRESSURE COOKER, which subsequently received a Grammy nomination for Best Blues Recording in 1986.

Moving to New Orleans in the late '70s, Gatemouth signed with Jim Bateman's Real Records production company. His first-ever American album, BLACKJACK, was released in 1978 on the Music Is Medicine label. An appearance on the PBS-TV series "Austin City Limits" soon followed, and Gate began touring nationally again. In 1979, he teamed up with country music star Roy Clark for an MCA album, MAKIN' MUSIC, which led to an appearance on the syndicated television program "Hee Haw," and another appearance on "Austin City Limits." More albums and television appearances followed, as well as a 1982 Grammy award for "Best Blues Recording" for ALRIGHT AGAIN! on the Rounder label. Gate also won his first Blues Music Award in 1982 for "Instrumentalist of the Year," beginning a string of Blues Music Awards for his instrumental versatility.  A second Rounder Records release, ONE MORE MILE, and a reissue of THE ORIGINAL PEACOCK RECORDINGS followed in 1983. That same year he won another Blues Music Award when he was voted "Entertainer of the Year."

Gate had two releases in 1986, Rounder's REAL LIFE and Alligator's Grammy-nominated PRESSURE COOKER, compiled of tracks cut in France during the 1970s. Gatemouth officially joined the Alligator roster in 1989 with STANDING MY GROUND, another Grammy nominee, featuring Gate backed by his red hot touring band. It was followed by the equally swinging 1991 release, NO LOOKING BACK.

In the last few years of his life, Gate continued his hectic touring schedule with performances across the U.S. as well as debut appearances in New Zealand and Australia. When asked by a New York Times reporter to explain his tours to such politically tense areas as Central America, Africa and the Soviet Union, Brown replied, "People can't come to me, so I go to them."

His knack for blending the various American music forms -- jazz, blues, bluegrass, country, swing, funk and zydeco -- coupled with his determination to bring his music to audiences around the world brought him praise from fans and the international media alike. Newsweek called him "a virtuoso talent." 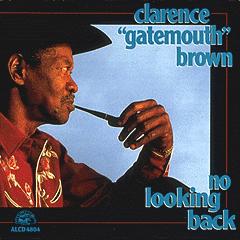 Clarence 'Gatemouth' Brown
No Looking Back 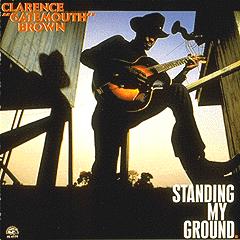 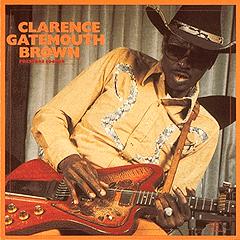