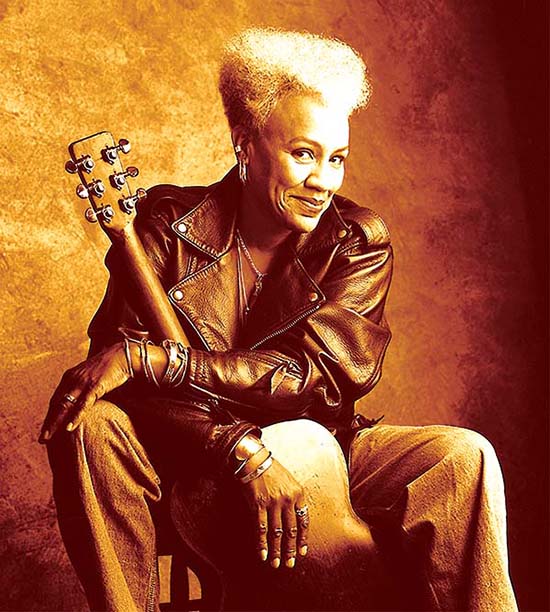 "A powerhouse of emotion." -- Blues Revue

Award-winning singer/songwriter/vocalist/guitarist Gaye Adegbalola's musical roots run deep. As a founding (and current) member of Saffire-The Uppity Blues Women, Gaye not only rediscovered the blues she first met as a child, she put her stamp on them, helping grow Saffire from local sensation to international phenomenon. "Adegbalola just keeps getting better and better as a songwriter," proclaimed The Buffalo News. The Boston Phoenix, speaking of Gaye's singing, said, "Gaye's vocal range varies from the lubriciousness of Sarah Vaughn to the crisp sonority of Nina Simone." Now with her first solo album, BITTER SWEET BLUES, Gaye Adegbalola reaches deep into her past and creates a musical statement for today and for the future.

Produced by blueswoman Rory Block (who also adds her intense slide guitar and background vocals on half of the album's tracks), BITTER SWEET BLUES features eight Gaye originals ranging from haunting to joyful, plus songs by Keb' Mo', Smokey Robinson, Bessie Smith, Ma Rainey and Gaye's primary inspiration, Nina Simone. BITTER SWEET BLUES is a deeply personal, semi-autobiographical, spiritually uplifting statement from a contemporary blueswoman. From Gaye's standout originals You Don't Have To Take It (Like I Did), Big Ovaries, Baby, and Nothing's Changed to Bessie Smith's Need A Little Sugar In My Bowl to Keb' Mo's She Just Wants To Dance to Nina Simone's Images , Adegbalola's musical upbringing and sharp-witted, take-no-guff personality combine to form a toe-tapping, thought-provoking album.

The roots of BITTER SWEET BLUES were planted the day Gaye Adegbalola was born in the small, segregated town of Fredericksburg, Virginia, in 1944. Her parents, both community leaders, also held a deep love of music. Her father, Clarence Todd, was the first black school board member in Fredericksburg, and played as a part-time jazz musician. Her mother, Gladys Todd, always brought home the old records when the jukebox was changed at the Youth Canteen where she worked. Gaye played flute in her high school band and was chosen for the all-state band three separate years. After her first job (sorting dirty laundry for forty-five cents an hour), Gaye's interest in the burgeoning civil rights movement began. She participated in many sit-ins and pickets during the 1960s after graduating from high school as valedictorian in 1961. During her teen years and throughout college, Gaye listened to music and danced every chance she had. "I would dance all night long to Chuck Berry, James Brown, Etta James, Ray Charles, The Shirelles, Ruth Brown, Ike and Tina Turner," she recalls, "These artists shaped my musical taste." As she got older, she developed a love of gospel and then jazz and eventually found Nina Simone. "Nina led me to Bessie Smith," says Gaye. "And I've never turned back. The blues roots of jazz became very clear to me."

While at college in New England, Gaye first learned a few chords on a guitar she bought from her roommate. Moving to New York, she became a militant and changed her name to Adegbalola, a Nigerian name meaning "I'm reclaiming my royalty." She participated in a political determination organization in Harlem, New York, in 1966 and became active in the Black Power movement, leading protests and singing political songs. Her son, Juno Lumumba Kahlil, was born in New York in 1969.

After returning to Fredericksburg in 1970, Gaye was a director of the theatre group Harambee 360o and often acted in the productions. She worked as a biochemical researcher and bacteriologist before teaching 8th grade science from 1971 through 1987, and was honored as Virginia State Teacher of the Year in 1982. In 1984, Gaye, along with her friend and guitar teacher Ann Rabson, formed Saffire-The Uppity Blues Women, releasing their self-produced cassette on their own label in 1987. Gaye hit the road full-time to tour with the band in 1988, and then signed with Alligator Records in 1989. Saffire quickly went from playing local clubs to entertaining thousands at concert halls and festivals all over the world, winning praise everywhere they went. Gaye's song, Middle Aged Blues Boogie, earned the Blues Music Award (the Grammy of the blues community) for Song Of The Year in 1990.

As Gaye's and Saffire-The Uppity Blues Women's  popularity grew over the course of six albums, Gaye, already a blues lover, dove even deeper into the music she loved, absorbing songs and history as well as vocal and songwriting techniques. She conducts workshops on blues vocals, blues history and women's blues all over the country. She even released an instructional video, Blues Vocal Techniques, available on Homespun Tapes. And in the little spare time she has, Gaye also sits on the Steering Committee of the Blues Music Association, a trade organization she helped to found. With the release of BITTER SWEET BLUES, Gaye adds another highlight to her already impressive career.

With Saffire-The Uppity Blues Women as popular as ever, the new solo album and constant touring, Gaye Adegbalola's musical career is in full swing. From her earliest childhood memories to her rocking teen years to her political and social leanings, Gaye Adegbalola's BITTER SWEET BLUES captures all of her influences together in a perfectly conceived collection. "In the blues Gaye found her voice and discovered a way to infuse humor into pain," said Blues Revue. "Her performances are a powerhouse of emotion." Indeed, the power and emotion Gaye Adegbalola infuses into BITTER SWEET BLUES is that of a woman who knows what she wants and knows just how to sing, dance, think, laugh and shout out to get it. 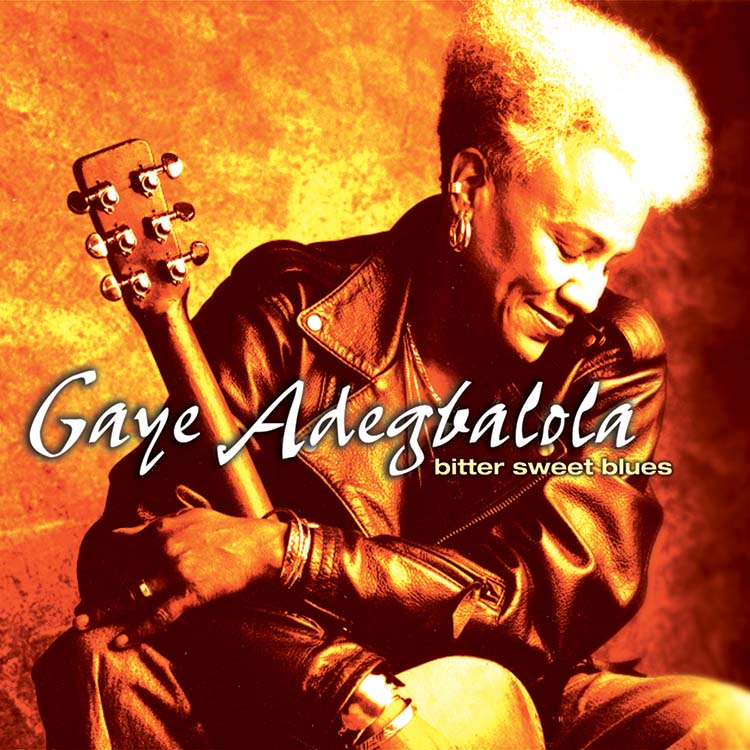