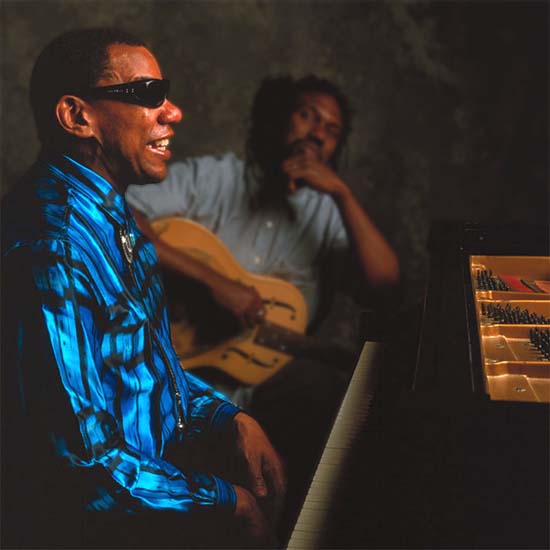 “The pride of New Orleans and a visionistical down-home cat and a hellified piano plunker to boot...He plays the piano like Art Tatum, but when he starts singing, he sounds like Paul Robeson.” —Dr. John

“A virtuoso” –The New York Times

New Orleans native Henry Butler was a virtuoso jazz and rhythm & blues pianist, a schooled vocalist naturally imbued with gospel credibility, a fierce performer and an expressive composer. "Once I sit at the keyboard, it's right there," explained the 51-year-old Butler. "I have an instrument on which I can express anything I want." Calling himself a perpetual "work in progress," Butler, a critically lauded jazz recording artist and an accomplished photographer (all the more startling considering Butler was blind since infancy), returned to his roots with Blues After Sunset on Black Top Records, an album of straight ahead New Orleans piano blues.

Born in the musical hotbed of New Orleans, Louisiana, Butler was attracted to piano at a very young age. By the time he was seven, he had joined the glee club at the Louisiana School For The Blind, where he was already studying piano. He was playing R&B and gigging professionally by the time he was 14, and went on to study voice in high school. Butler attended Southern University in New Orleans.  Once there, he fell under the spell of jazz giant Alvin Batiste, who quickly became Butler's mentor. Batiste taught Butler how to improvise, and the importance of spontaneously playing what's in the mind's eye. With Batiste's help, Butler began adding the jazz legacy of Art Tatum, Bud Powell, Charlie Parker and John Coltrane to the Crescent City R&B he'd absorbed from Eddie Bo, Tommy Ridgley, James Booker and Professor Longhair.

After graduating from college, Butler plunged into performing around New Orleans, playing his own mix of jazz and R&B. He went on to earn a master's degree from Michigan State University before returning to New Orleans in 1974. Once there, he began gigging with every important jazz and R&B musician in the city, including Charlie Haden and Batiste. While teaching at the New Orleans Center For The Creative Arts, Butler spent a few very intense afternoons in the living room of Professor Longhair, learning Fess' shuffle patterns, trills and parallel thirds and sixths. "Fess showed me how he approached the piano and mainly taught by demonstrating," recalled Butler. "I listened and tried to emulate what he had shown me."

Butler moved to Los Angeles in 1980 where he gigged and worked as a talent development consultant for Motown Records and the Stevie Wonder organization. After sitting in with bassist Charlie Haden, Butler's fortunes changed. He recorded his first album, Fivin' Around, for MCA/Impulse! in 1986. After a second MCA/Impulse! release, The Village, Butler's reputation as an important force in the jazz world began earning him hordes of new fans. Critics raved about a virtuoso pianist who mixed soul with brains, and about a live performer who consistently knocked audiences off their feet with his lightning-fast runs. "Mr. Butler revels in fluency and facility, splashing chords all over the keyboard and streaking through solos with machine-gun articulation," said The New York Times. "Boldly straddling the boundary between down-home funk and jazz improvisation," added Billboard.

Butler recorded two albums for Windham Hill, 1990's Orleans Improvisation and 1992's Blues And More, before heading back to New Orleans in 1996. He released For All Seasons that same year on Atlantic Jazz, again to massive critical acclaim. He won the 1998 "Best Of The Beat" Award from Offbeat magazine for Best New Orleans Piano Player, and continues to impress critics, fans and fellow musicians with his massive talents. "Henry Butler is one of the artists laying the foundation for the 21st century," says Alvin Batiste of his former student. "Henry Butler is my all-time favorite musician," said pianist and recording artist George Winston. "He's the pride of New Orleans and a visionistical down-home cat and hellified piano plucker to boot," raved one of Butler's most famous admirers, Dr. John.

Butler's stride bass figures and swirling right hand led at least one critic to describe him as "McCoy Tyner in the left hand, Professor Longhair in the right, the best stride-and-blues-based modernist you've ever heard." "Butler simply produces more ideas and commands more techniques for articulating and developing them than one is accustomed to hearing from a single artist," raved The Chicago Tribune.

While Butler no doubt appreciated the accolades, he was always looking within himself for new sounds and ideas. "I like being in a place where I can pour out my soul," he said of his love of the blues form. In 2000, Butler joined another musicians with deep roots in the Crescent City--guitarist/vocalist/songwriter Corey Harris. Together, they added to the city's musical legacy with their duet album, vu-du Menz (AL 4872), on Alligator Records. Featuring sometimes serious, sometimes rollicking, acoustic duets from these two exceptionally gifted artists, vu-du Menz was a joyous celebration of deep South musical styles, as Harris and Butler combined forces to create an album of pure Southern musical magic.

Vu-du Menz was recorded in four days in January 2000 at Dockside Studios in southwest Louisiana. Although separated by 20 years in age, Harris and Butler were of one musical mind, communicating almost telepathically throughout the album's 15 songs (including 13 originals), expressing timeless emotions of love as well as biting social commentary. The songs on vu-du Menz ranged from straight-ahead blues (Song Of The Pipelayer) to ragtime (If You Let A Man Kick You Once…) to New Orleans funk (Voodoo Man) to jazz (L'Espirit de James) to gospel (Didn't The Lord Deliver Daniel?). Harris' supple guitar playing and husky vocals perfectly blended with Butler's genre-defying piano playing and huge, soulful singing voice throughout each and every song on this tradition-based, forward-thinking album. 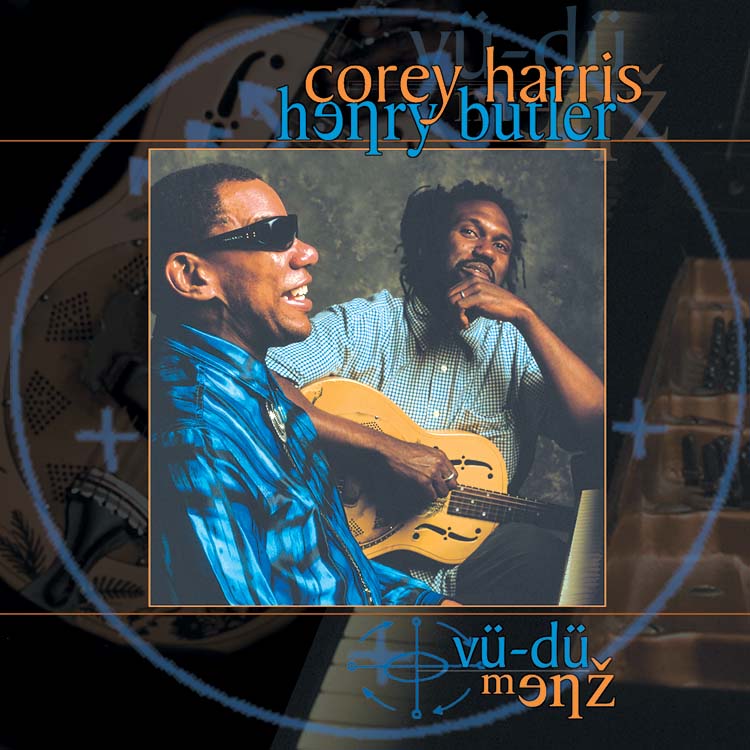