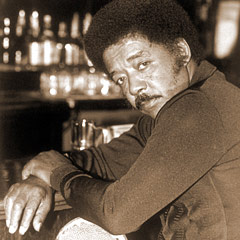 Jimmy Johnson is one of Chicago's most passionate blues singers and original guitarists, making him one of the area's top drawing bluesmen. Locally, Johnson is rated the equal of such acclaimed Chicago bluesmen as Buddy Guy, Otis Rush, Lonnie Brooks and Son Seals.

Johnson's lone release on Alligator Records, Bar Room Preacher, was an important step in solidifying Johnson's reputation as one of this country's top contemporary bluesmen. The album was a prime showcase for his high, gospel-tinged voice and elegantly jazzy, stinging guitar.

Raised in an exceptionally musical family in the small town of Holly Springs, Mississippi, Johnson began singing in the local church choir. He later sang with the United Five, a spiritual group in Memphis. After his move to Chicago in 1950, he sang and played guitar with the Golden Jubilaires.

Johnson's younger brothers, Mac and Syl, took up the blues early on and became professional Chicago blues musicians while their older brother was still working as a welder and singing with Windy City gospel groups. Mac spent many years as Magic Sam's bassist. Syl Johnson, a popular soul singer with a string of R&B hits under his belt (including the original version of Take Me To The River), has also remained strongly rooted in the blues.

It wasn't until the late 1950s that Johnson became a professional performer himself. In 1959, he began playing with bluesmen Magic Sam and Freddie King, and gigged with Harmonica Slim Willis and others. Though his first love was the blues, there was more money to be made as an R&B artist. Johnson spent the next 20 years jobbing as a highly successful soul and R&B guitarist and bandleader on Chicago's South and West sides.

Johnson finally grew tired of covering everyone else's hits and decided to pursue blues full-time. In 1974, he began his back-to-the-blues campaign when he signed on with Jimmy Dawkins as Dawkins' rhythm guitarist. He toured Japan with Dawkins and Otis Rush, appearing on Rush's live Japanese album and two Dawkins studio albums before putting together his own band.

Johnson's debut as a blues recording artist was explosive. In 1978, his name first garnered national attention as well as a Grammy nomination when Alligator included four previously unreleased Johnson tracks on Living Chicago Blues, Vol. 1.   These cuts, and two soon-to-follow records on the Delmark label (Johnson's Whacks in 1979 and North/South in 1982), established Johnson as a witty and prolific songwriter who combined challenging arrangements and elements of jazz, rock, gospel and country into a blues style all his own.

Johnson's approach to the blues is straight ahead and honest. His 1985 Alligator effort, Bar Room Preacher, features vibrant renditions of such standards Cold, Cold Feeling, When My First Wife Quit Me and Little By Little, as well as Johnson originals Happy Home, Heap See and Missing Link.

Johnson has won a variety of national and international awards over the course of his career. Since recording for Alligator and Delmark, Johnson has remained active in music and continues to tour and record. 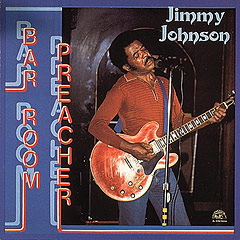