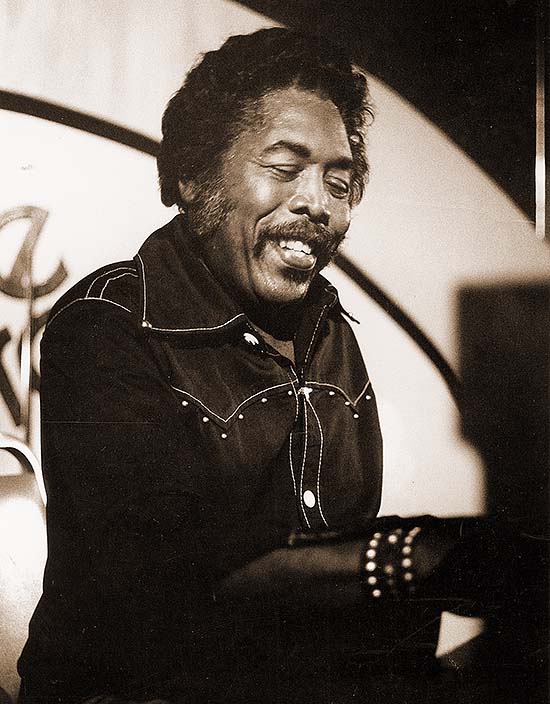 Johnny Walker--Big Moose, Busy Head, Moose John, J. W. Walker--by whatever name he was called him, he was Chicago’s irrepressible wild man of blues piano. He wore a splendid smile and long, wavy hair; in his briefcase he carried a gorilla mask and a “Big Moose” jersey. Just as musicians and audiences enjoyed Moose’s antics, they also admired the exuberant, two-fisted blues he played. He’s worked alongside the best in the business and rambled from coast to coast.

John Mayon Walker’s story was colorful from the start. He was born June 27, 1927, in Stoneville, Mississippi, but the way Moose told it, “I was really born in a graveyard, playing with the tombstones.” Indian blood and long flowing hair ran in the family. He picked up the nickname Moose as a youngster hanging around the pool hall in Greenville, Mississippi. “I wore my hair so long maybe I looked like a moose, I don’t know. I asked the guys, ‘Why you call me Moose?’ They said, ‘Well, that’s the only thing that fit for you.’”

Moose made his first music on an old church organ. He played guitar in the cotton fields, took tuba lessons and once had visions of becoming a famous blues vibes player. During the ‘50s he became known as a pianist and bass player as he roamed through the Delta and beyond. He played with many local Greenville bluesmen, joined Ike Turner’s Kings of Rhythm in Clarksdale and sat in with the King Biscuit Boys in Helena, Arkansas. He worked the Mississippi juke joints with Elmore James and Sonny Boy Williamson. He switched to guitar for gigs with Boyd Gilmore in Arkansas and with pianist Eddie Snow in Cairo, Illinois. He lived with bandleader Tuff Green in Memphis and with pianist Pinetop Perkins in East St. Louis. He got to do some shows with Lowell Fulson when Fulson’s bandleader, Choker Campbell, hired Moose to drive the group around the country. He traveled even more extensively with the roadmaster of the blues, Earl Hooker. During the drunken party in St. Louis, he won a $50 dollar bet with Ike Turner by jumping off the third floor of a building. (It was just enough to cover the hospital bill.) And he joined the army and went to Korea.

He did some recording in the ‘50s too. His first studio date was with Elmore James and Sonny Boy Williamson, for Trumpet Records in Jackson, Mississippi. In 1955 Ike Turner taped Moose in a Greenville club; two of those sides, credited to J.W Walker, appeared years later on the Kent Label. He appeared with Earl Hooker on Johnny Otis talent show in Los Angeles and cut his first 45, as Moose John, for Otis’ Ultra label, also in 1955.

Moose recorded even more after Sunnyland Slim brought him to Chicago. He backed Earl Hooker, Ricky Allen, Lorenzo Smith and others on local sessions. Willie Dixon took Moose to New York in 1960 to do some studio work for Prestige/Bluesville. Moose rejoined Elmore James at Silvio’s on the West Side and went to New Orleans with Elmore to record for Bobby Robinson’s Fire label. At another session for Robinson, Moose sang a few himself. Those tracks ended up being credited only to “the mysterious Bushy Head” on an Elmore James LP release in England. Two Chicago labels, The Blues and Age released Big Moose singles during the ‘60s. Moose’s first album came in 1969 when he and Earl Hooker went to Los Angeles to record for ABC Bluesway.

The guitar wizard Earl Hooker was Moose’s closest partner, on Chicago gigs and chaotic road trips. After Hooker’s death in 1970, Moose played in several other Chicago bands, including those of Jimmy Dawkins, Mighty Joe Young and Louis Myers. When Moose had his own gigs, he usually worked solo, or with just his drummer, Chris Moss. The duo once played bump-and-grind organ music for go-go dancers at sleazy Near North Side Joints. Moose also appeared at the Soul Queen restaurant on the South Side and played between band sets at Kingston Mines on the North Side.

In the late ‘70s, Moose joined Eddie Shaw and the Wolf Gang, just in time for their session for Alligator’s Living Chicago Blues series. Alligator president Bruce Iglauer was so impressed by Moose’s two-fisted piano that he offered him a session of his own for the series. Moose responded with four intense songs on a session that included his pal Louis Myers on guitar. Bass guitar was almost unnecessary, as Walker carried the bottom end with his pounding left hand.

Moose went on to record a handful of albums for various small labels, mostly in Europe, and to tour whenever anyone called him. In 1982 he made a memorable trip to New Zealand where he ended up living in a native Maori village, venerated as a member of the tribe!

Johnny “Big Moose” Walker suffered a serious stroke in the late 1980s and lived for a number of years in a Chicago nursing home before his death in 1999. No piano player of such sheer power and strength has arisen in Chicago to replace him.