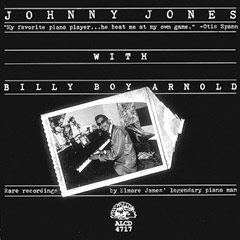 There are a few piano players who defined the classic Chicago blues style of 88s.  Otis Spann was the best known, and Henry Gray, Sunnyland Slim and Memphis Slim all made brilliant recordings as both leader and sideman.  Although not as well known as these great blues names, Johnny Jones was every bit their equal.

Born on November 1, 1924, in Jackson, Mississippi, Johnny Jones was a cousin of legendary blues pianist Otis Spann. Spann was a big influence on Jones, and both learned from the great Big Maceo Merriweather. Regarded as one of the best piano players ever on the Chicago blues scene, Jones recorded with Elmore James and many other blues greats, including Muddy Waters, Jimmy Reed, Howlin' Wolf, Billy Boy Arnold and Magic Sam.

Jones learned to play piano and harmonica as a child. Along with his family, Jones moved to Chicago during the mid-1940s. By the late 1940s, he was good enough to be playing dates and recording with the very popular Tampa Red. In 1950, he recorded for the Aristocrat label, backing Muddy Waters on two sides and doing a pair of his own songs with Waters supporting him, one of which was Jones' Big Town Playboy, regarded as a Chicago blues classic.

But his most celebrated musical partnership was with the great slide guitarist Elmore James, with whom Jones first began performing around 1951. Jones played on James' seminal Chicago recordings from 1952 through 1956. During the 1950s, Jones and James regularly performed at the legendary Chicago blues club, Sylvio's. And Elmore James appeared on three Johnny Jones recordings: the 1953 Flair sides I May Be Wrong/Sweet Little Woman, and Hoy Hoy, Jones' last commercial single on Atlantic.

During the latter part of the 1950s through the early 1960s, he performed with artists such as Magic Sam, Sonny Boy Williamson, Syl Johnson and Billy Boy Arnold, as well as leading his own bands.  By the early 1960s, he often worked as a session pianist, appearing on Howlin' Wolf's seminal track, Little Red Rooster. He also cut a number of sides with Jimmy Reed.

He continued to peform into the 1960s even though he had begun to develop lung problems. He was diagnosed with cancer in 1963 and died November 19, 1964 in Chicago.

A posthumously released live album on Alligator, Johnny Jones With Billy Boy Arnold, recorded in a club with only the two musicians performing as a duet, is a testament to Jones' power as a pianist and performer. 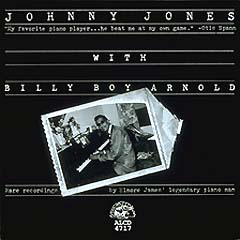