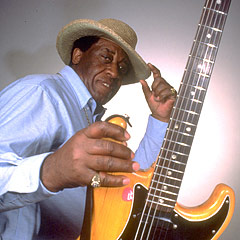 Long John Hunter seemingly came out of nowhere in 1996 with his Alligator Records debut, Border Town Legend (AL 4839). With the smoking follow-up, Swinging From The Rafters (AL 4853) in 1997, Hunter had gone from the Lone Star state's best-kept secret to the international blues world's most wanted list. His made-for-dancing Texas shuffles, fueled by searing single-note solos and melodic, drawling vocals have made Long John Hunter a favorite at clubs, concert stages and festivals all around the world. The Los Angeles Times called him "one of the blues' best kept secrets...a top notch singer, guitarist and unbridled wildman performer. Hunter is a raw, feral talent bursting with energy."

But Hunter's story doesn't start here. Long John's been playing his foot-pounding brand of original, hard-driving roadhouse blues for over 40 years. For 30 of those years he remained mostly in West Texas, where he was the reigning blues king of El Paso and Juarez, Mexico. With only a handful of singles and a very obscure album to his credit, Long John didn't release his first full-length, nationally distributed album until 1993. With that album, Ride With Me (originally released on the Spindletop label), Long John's future looked very bright. But the label fizzled soon after the record's release, leaving Long John Hunter right back where he started. Now, with Long John's popularity at an all-time high, Ride With Me (AL 4860) returns, letting his many fans new and old in on this (almost) lost Texas blues classic.

John T. Hunter, Jr. was born in Louisiana in 1931 and grew up in Arkansas and Texas. He had no interest in being a professional musician until, at age 22, co-workers at the Beaumont, Texas box factory where he worked took him to see B.B. King perform at the Raven Club (he wasn't going to go when he heard about the $1.50 cover charge, so his friends paid his way). Hunter was amazed at the reception King got from the crowd, especially the frenzy of the women in the audience. The very next day Hunter went out and bought a guitar. Even though he had never played before, he was determined to be like B.B. That very week he put a band together and before long developed his own style, a vibrant mix of swinging blues and razor sharp guitar playing reminiscent of fellow Texans Albert Collins and Gatemouth Brown, with a definite nod towards B.B. King. Less than a year later, Hunter was headlining at the Raven, the very same place he first saw B.B.

Word of this new sensation spread to Houston, where Don Robey of Duke Records (home of Bobby Bland and Junior Parker) released Hunter's first single, Crazy Baby b/w She Used To Be My Woman, in 1954. The record didn't win Hunter a national audience, but it did generate enough interest to keep him working full time as a musician. Hunter headed for Houston in 1955 to try and capitalize on his Duke single. He played shows with Little Milton, Johnny Copeland and many others. Two years later, he moved west to El Paso. The very night Hunter arrived, he crossed the border into Juarez, Mexico and found work at the Lobby Bar where he stayed for the next 13 years. Seven nights a week from sundown to sun up, Long John and his band of former Mexican bartenders played against a colorful and dangerous backdrop of soldiers, tourists, frat boys, hookers, cowboys and playboys all fueled by a steady flow of alcohol, fights and one night stands. "If it didn't happen at the Lobby Bar," recalls Long John, "it just didn't happen in life." The people in El Paso and Juarez wasted no time in proclaiming Long John Hunter their reigning king of rocking West Texas blues.

Despite the adulation, this was a tough crowd, and Long John knew how to keep them interested. No crying in your beer songs here. Just uptempo party blues played with blistering authority and a remarkable sense of showmanship. One of his favorite tricks had him holding his guitar by the neck in one hand, all the while continuing to play. With his free hand, he'd reach up, grab a rafter above the stage and start to swing, never missing a beat. To this day, people everywhere pull John aside to relive memories of Juarez and El Paso.

The raucous Lobby Bar crowd delighted in Long John's music and showmanship. Word of this guitar wildman began to spread around Texas, and Hunter's association with many musical legends began: Gatemouth Brown (and his brothers Widemouth and Bigmouth), Albert Collins, Big Mama Thornton, Lightning Hopkins, Etta James and Lowell Fulson all knew and hung out with Hunter, telling him of the opportunities outside of Texas. Buddy Holly crossed the border into Juarez, Mexico to see him just before Holly became a star. Bobby Fuller (I Fought The Law) was his protege. Twice James Brown brought his band to see this wildman performer. The second time Brown surprisingly took the stage during a set break. Unfazed, the audience screamed for Brown and company to move on and clear the way for the return of their hero, Long John Hunter.

Hunter recorded a number of singles for the Yucca label from 1961 to 1963 (these sides were later released as Texas Border Town Blues on the Dutch Double Trouble label in 1986). Although all of these recordings were well received locally, Hunter's reputation never spread (due in no small part to his desire to stay in Jaurez, where he was treated like royalty and even had his own body guards and expense account). Hunter occasionally toured outside of Juarez, but he always returned to the Lobby Bar. Even without new recordings, Hunter continued to be the blues king of Juarez and West Texas. After the Lobby Bar closed down, Hunter spent a few years in El Paso and began working the West Texas blues circuit. He recorded an album for the Boss label in 1985 before moving to Odessa, Texas in 1987, where he continued to play his ferocious brand of rocking blues. 1993 saw the original release of Ride With Me, giving John his first taste of a larger audience. "Long John Hunter gets busy with a gritty authority that belies his 60-plus years," shouted Rolling Stone. "One of the year's finest blues releases," added Living Blues. Reviews and features ran in Billboard, Musician, Pulse, Blues & Rhythm, the Washington Post, the Austin Chronicle and many other publications. It appeared as if Long John Hunter's time had finally come.

But fate had other plans. Shorty after Ride With Me appeared, Spindletop disappeared. Long John Hunter's climb to the top was on hold until the 1996 release of Border Town Legend on Alligator Records. "Hunter's ability is too big for just Texas," raved the Chicago Tribune. Living Blues said, "fierce string-bending, raw-edged guitar work...pops and sputters into your consciousness like home-cooked soul stew served with jalapeno sauce. He's a thoroughly original stylist with an irrepressible sense of fun, chops to burn, and a musical imagination that shows no signs of slowing down." Features and reviews ran in Guitar Player, the Washington Post, the Chicago Sun-Times, Blues Revue, Blues Access, Living Blues and many other national and regional publications. And the album topped Living Blues' 1996 Radio Chart, with over 150 radio stations reporting. The 1997 follow-up, Swinging From The Rafters, was met with even greater fanfare. "The raw force of Hunter's feral, Albert Collins-derived Texas blues is undeniable, and his legendary showmanship comes across even on a recording," shouted the Boston Herald. "Hunter embodies Texas blues in all its varied, roustabout glory like no one on the scene today," raved the Chicago Tribune. Blues Revue declared Hunter "burns as hot as a mid-August Texas afternoon." Indeed, after over 40 years of barn-burning performances, Long John Hunter had arrived.

The strength and success of Border Town Legend and Swinging From The Rafters led to Hunter's first major introduction to an international audience. He's played numerous high-profile concerts including The Chicago Blues Festival, South By Southwest, San Antonio Cultural Festival, Long Beach Blues Festival, as well as tours of Europe and Hawaii. And there's no slowing down for Hunter and the Walking Catfish Band as they continue to criss-cross the United States and beyond. Now, with the reissue of Ride With Me on Alligator Records, Hunter's many fans and friends can experience first-hand the uptempo West Texas grooves and guitar-drenched border town blues that helped make Hunter one of the most in-demand blues performers on the club and festival circuit today. With Ride With Me, Swinging From The Rafters, Border Town Legend and an overflowing tour schedule, Long John Hunter extends an open invitation to climb aboard his supercharged blues train as it makes its way from West Texas to destinations all over the world. 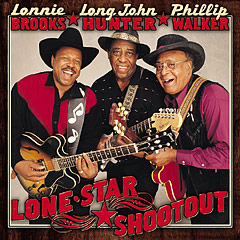 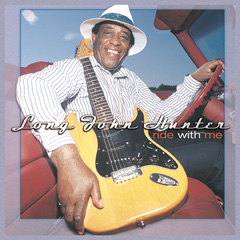 Long John Hunter
Ride With Me 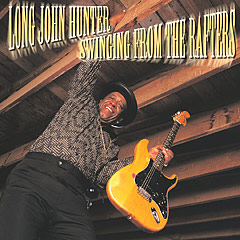 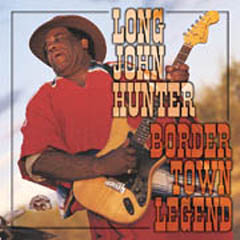