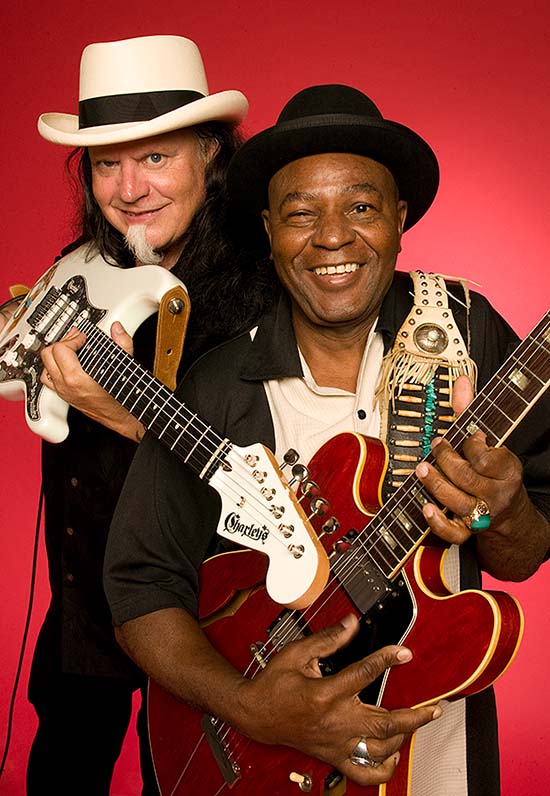 Of all the blues legends the great state of Texas has produced, none sounded quite like Smokin’ Joe Kubek and Bnois King. For 20 years, until Kubek's death from a heart attack in 2015 at the age of 58, the two Lone Star guitarists—one a hard-edged, hard rocking blues player and the other a jazzy, elegant rhythm player who delivered raw, spontaneous solos-—took their dual guitar attack from the heart of Texas to fans around the globe. Kubek and King’s twin-frontman lineup was unparalleled on the blues scene. Backed by their rock-solid rhythm section, Kubek’s fiery fretwork was perfectly matched by King’s sophisticated rhythm playing and rough-edged, down-home soloing and his soulfully conversational vocals. For more than 20 years and thousands of live shows, the duo’s scorching blues and telepathic interplay thrilled fans all around the world. Their two Alligator CDs, Blood Brothers and  Have Blues, Will Travel, were collections of fresh original songs played with passion, taste and a white-hot intensity. Billboard said the band played “hard-hitting, original blues. Kubek is one of the fiercest Texas blues guitarists…his fiery leads are complemented by King’s adroit rhythm guitar and classic vocals.”

The band’s Alligator Records debut, 2008’s Blood Brothers, brought these two long-time musicians to their largest audience and earned the band accolades all across the country. The Chicago Sun-Times declared, “Genuine houserockin’ blues…they boogie till the break of day.” Allmusic described the album as “tough, robust, soul-blues that is as hot as they’ve ever gotten in the studio. Impressive.”

With Have Blues, Will Travel they tok another giant step forward. Kubek and King wrote or co-wrote all twelve songs, and, along with their road-tested rhythm section, they ignited a blues fire with enough heat to fuel an all-night party. The chemistry between Kubek’s blistering fretwork and King’s savvy vocals and unpredictable, multifaceted guitar work created a roadhouse blend of muscular blues-rock, hip-shaking shuffles and slow-burning blues. King called it the best record the band ever made.

According to Alligator president Bruce Iglauer, “Joe and Bnois were a real powerhouse blues combination. Joe was an amazing guitarist who could play anything in blues, from the most traditional Texas style to totally blowout blues-rock. Bnois is a gorgeous singer with deep Texas soul, and his guitar playing is subtle and melodic. Together they made an unbeatable two-man front line backed by a solid, versatile rhythm section.”

On the surface, it would seem hard to imagine two of the most stylistically disparate guitarists joining forces and creating such a signature sound. Joe Kubek was born in Pennsylvania in 1956 but grew up just outside of Dallas. He was leading his own bands and gigging in clubs all around Dallas when he was only 14. Bowled over by the blues a short time after first hearing Eric Clapton and Jeff Beck, Kubek soon discovered the music of Muddy Waters, Howlin’ Wolf and other early blues masters including Freddie King, Johnny Copeland and Lightnin’ Hopkins. By the time he was 19, he was backing many famous blues players in the area, including legend Freddie King. In 1976, Kubek was about to head out on tour with King when King died suddenly of a heart attack. “I was in awe any time I was around him,” Kubek recalls. “I learned a lot about feeling and execution. He always came onto the stage hot. You have to entertain people from the second you start.”

Kubek next worked with R&B singer Al “TNT” Braggs and made a host of new friends, including Albert King, Stevie Ray Vaughan (with whom Kubek became close), B.B. King and many other blues icons. He often found himself jamming with these larger-than-life blues stars, while playing constantly around the Dallas area. He not only learned tips and techniques, but also soaked up stories and the lessons of being a professional touring musician. One night, he even had the chance to play B.B.’s guitar, Lucille. “B.B. admired my enthusiasm and he encouraged me, which really meant a lot. When times got hard, I always remembered how B.B. King had given me some encouragement.”

In 1989, Kubek met guitarist/vocalist Bnois King at a Monday night Dallas jam session. The two became fast friends, and melded their seemingly divergent styles—Kubek a rocking and fierce picker and slider, King a subtle, fat-chord rhythm player whose soloing is spontaneous and unpredictable—into one of the most potent guitar combinations the Southwest had ever produced. Kubek explained the relationship succinctly: “Bnois fires me up. We are constantly pushing each other higher, complimenting each other’s solos. But it’s not planned. We never know what we’re going to do until it’s done. I pull the blues out of him, and he pulls the jazz out of me. Bnois knows so much about jazz it’s amazing.”

Bnois (pronounced Buh-noice) King was born in Delhi, LA in 1943. He was inspired to play guitar by his high school music teacher. Before long, Bnois was playing blues cover songs with a local band. On his own, he traveled through Texas, Oklahoma and Colorado, finding local bands to gig with and also performing with carnival tent show groups. King made his way to Dallas in 1979, gigging with jazz combos until he hooked up with Kubek ten years later. A master storyteller, King didn’t start writing and singing until he joined forces with Joe, when both duties fell on him. “We needed a singer so I sang,” King recalled, “and every time I did the crowds went wild. We needed songs so I wrote about things that happened to me, to people I knew. That’s what I still do today.” As for his guitar work, King was similarly modest. “Joe inspires me a lot,” King says. “When I solo, it’s a spur of the moment thing. I don’t have a plan. I react to what I hear on the bandstand.”

On the strength of their huge local following, Kubek and King signed to Bullseye Blues and released their debut CD, Stepping Out Texas Style, in 1991. After conquering the Dallas scene, the band began touring clubs, concert halls and festivals nationally and internationally. Following a successful series of eight Bullseye releases, they signed to Blind Pig Records in 2003. As their popularity continued to build on the strength of their recordings and the energy of their live shows, the band’s touring schedule grew to over 150 dates per year all across the United States, Canada and Europe (where they toured more than a dozen times), solidifying their place in the blues world with one jaw-dropping show after another.

Kubek and King signed with Alligator in 2008 and released Blood Brothers. Their fresh approach, the smoking hot playing and the original, slice-of-life lyrics all added up to a blues lover’s delight. The Dallas Observer said, “An electric blast of twelve-bar heaven…they blow the roof off.”

More than anything else, Smokin’ Joe Kubek and Bnois King loved to perform live. They gigged from coast to coast, bringing their no-holds-barred brand of soul-charged, rockin’ Texas blues to old fans and newcomers night after night. Have Blues, Will Travel was not just the name of their second Alligator album. For Smokin’ Joe Kubek and Bnois King, it was a way of life. 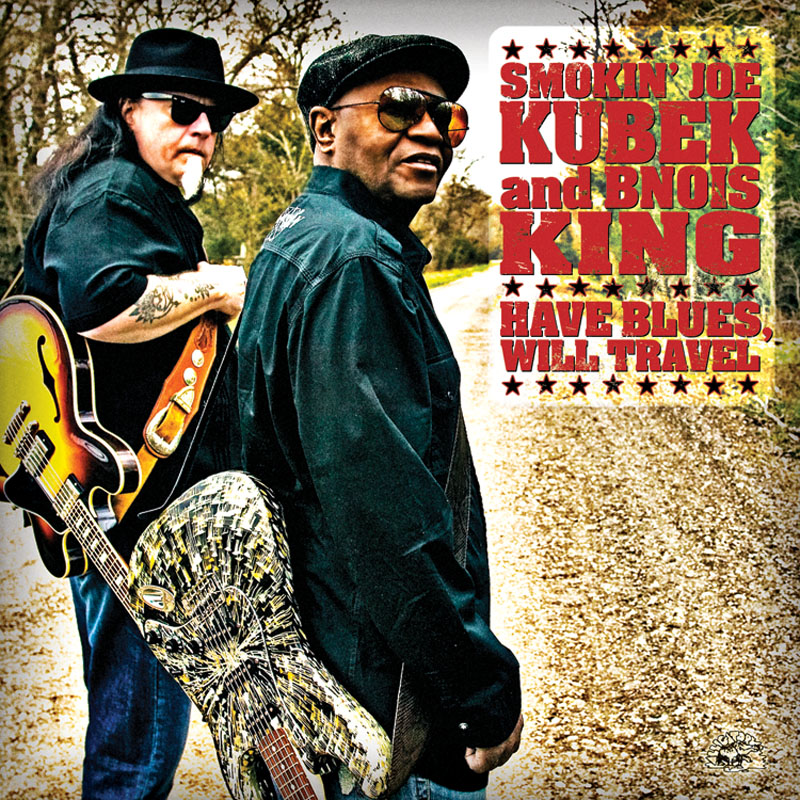 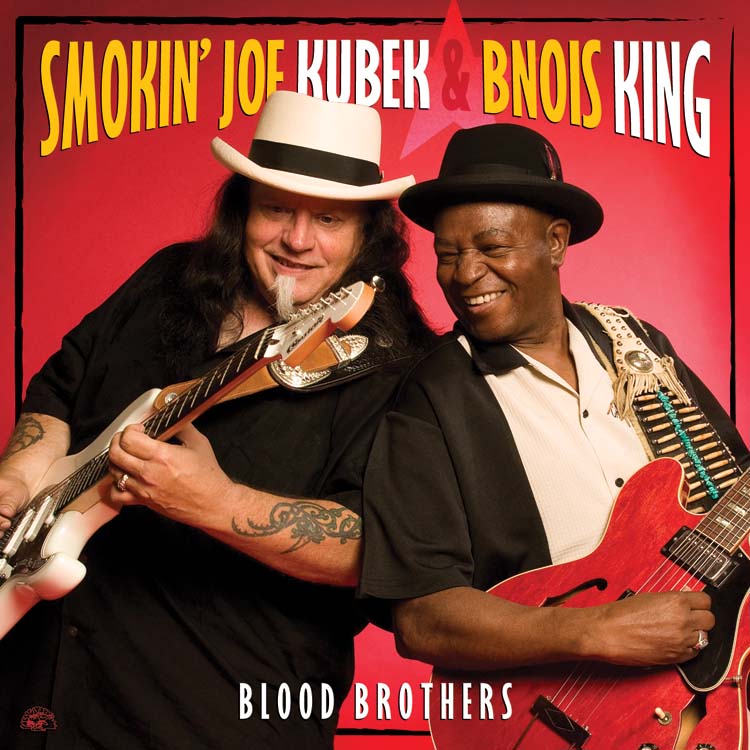