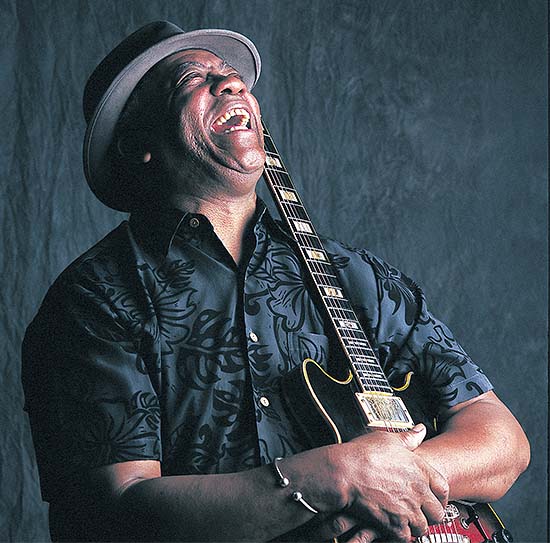 The Austin American Statesman says its hometown hero--guitarist/vocalist/songwriter W.C. Clark--is "one of the greatest modern blues performers in the world…blending rock with R&B, soul and a touch of funk." The Austin Chronicle describes his music as "Good rockin', soul-drenched Austin blues. A potent combination of gritty Texas guitar wedded to devastating, gospel-rich Memphis vocals." For many years, Clark was one of Austin's best-kept secrets. But thanks to a series of stellar albums (each accompanied by piles of passionate press) and a reputation as a powerful live performer, the man known as "The Godfather of Austin Blues," is now among the best-loved guitarists and vocalists in the blues world. In addition to all of his popular and critical acclaim, Clark won the 2003 Blues Music Award for "Blues Song of the Year" for his composition Let It Rain from his Alligator Records debut, From Austin With Soul, and was nominated for the 2004 Blues Music Award for "Male Soul Artist Of The Year."

Clark has been playing music for over 40 years, and he's been mentoring countless young blues and soul players in Austin for almost as long. Blues stars from Stevie Ray and Jimmie Vaughan to Angela Strehli to Lou Ann Barton to Marcia Ball have all perfected their craft under Clark's tutelage. His mix of modern Texas blues, searing guitar and heartfelt, Memphis-style soul vocals have made him a favorite of blues and R&B fans alike. The Houston Chronicle says Clark is "one of Austin's most pervasive live performers…he is a powerful and poignant soul man with hard-earned blues wisdom." The New York Post calls Clark "a legend of the blues world."

His new Alligator CD, Deep In The Heart, is another slice of stunning soul mixed with contemporary electric blues. Clark's gospel-inflected vocals and inspired, lyrical guitar work dominate the album, which was recorded in Austin and produced by Mark "Kaz" Kazanoff. From wrenching, heartfelt ballads to celebratory, horn-fueled Texas stomps, Deep In The Heart is a blistering ride through sinewy Memphis soul and foot-stomping Texas roadhouse blues. With the addition of friends Marcia Ball and newcomer Ruthie Foster duetting on three songs, Deep In The Heart is the most fully realized and soulfully intense album of Clark's long career.

Wesley Curley Clark was born into a musical family in Austin in 1939. His father played guitar and his grandmother, mother and sisters all sang gospel in the church choir. "I had so much music in my soul," Clark recalls, "all I had to do was pick up an instrument and play it." He learned the guitar as a youngster and at age 16 played his first gig at the Victory Grill, where he was introduced to Texas blues legend T.D. Bell. Soon after, Clark switched to playing bass and joined Bell's band, The Cadillacs. In the early 1960's he began a six-year stint with Blues Boy Hubbard and The Jets at the popular Austin nightclub Charlie's Playhouse. There he met R&B hitmaker Joe Tex, who recruited W.C. to fill the vacant guitar slot in his group. Clark toured the Southern "chitlin' circuit," learning music firsthand from Tex and countless soul and blues stars, including Tyrone Davis and James Brown. Along the way, Clark perfected his ability to lift an audience into a frenzy.

When he returned to Austin, Clark found the musical landscape changing with a whole new crop of young white kids beginning to venture out to the blues clubs to learn how to play. The scene was completely transformed as future stars like the Vaughan brothers and Angela Strehli came to Austin and discovered the rich musical legacy of bluesmen like W.C. Clark.

In the early 1970's, Clark formed the band Southern Feeling along with singer Angela Strehli and guitarist/pianist Denny Freeman. He then befriended Jimmie Vaughan's firebrand guitarist brother Stevie Ray, who occasionally sat in with the band. After Southern Feeling dissolved, Clark took a day job as a mechanic, but was courted relentlessly by Stevie Ray, who was determined to have W.C. as a member of his own band. Clark eventually quit his job to become the bass player in the Triple Threat Revue with Stevie Ray, keyboardist Mike Kindred, drummer Freddie Pharoah and singer Lou Ann Barton. During his tenure with Triple Threat, Clark and keyboardist Kindred co-wrote Cold Shot, which became one of Vaughan's biggest hits and recently earned W.C. his first platinum record.

Clark left Vaughan in the late 1970's, formed his own band, The W.C. Clark Blues Revue, and self-released his first recording, Something For Everybody, in 1986. The band became stalwarts on the Austin scene throughout the 1980's and early 1990's, playing regular gigs at legendary venues like Antone's and opening for the likes of B.B. King, James Brown, Bobby "Blue" Bland and Albert King. Clark's star-at least locally-was rising. The Austin American Statesman called Clark, "Austin's most soulful bluesman."

As his celebrity increased, the critically acclaimed PBS television show Austin City Limits celebrated Clark's 50th birthday in 1989 by bringing him together with his disciples Stevie Ray Vaughan, Jimmie Vaughan, Kim Wilson, Lou Ann Barton, Angela Strehli and Will Sexton, in front of a live, wildly enthusiastic audience. The broadcast, one of the series' most popular, brought Clark to the attention of a national audience for the first time.

In 1994, Clark's friend Mark "Kaz" Kazanoff introduced him to Hammond Scott of Black Top Records. Impressed by what he heard, Scott released Heart Of Gold that same year. For the first time, through national touring, Clark emerged from Austin and became a favorite of blues lovers around the country. Texas Soul followed in 1996, exciting fans and critics alike. "Honey dripping soul, the toughest of Lone Star blues," hailed The Chicago Tribune. By 1997, Clark's visibility was growing fast. He performed at the 1997 New Orleans Jazz & Heritage Festival and, a short time later, won the Blues Music Award for "Soul Blues Album Of The Year" for Texas Soul.

Clark's next Black Top release, 1998's Lover's Plea, earned him another Blues Music Award, this time for "Artist Most Deserving of Wider Recognition." Another televised performance (as part of The Best Of Austin City Limits) hit the airwaves in 1998, setting the stage for a national tour in support of Lover's Plea. Critics and fans went wild. The Chicago Reader called him "a veritable superstar." And in 2000, Austin City Limits aired an extended jam between W.C. Clark and Stevie Ray Vaughan as part of a Stevie Ray Vaughan special.

In 2002, Clark released his debut album for Alligator Records, From Austin With Soul. Blues Revue declared, "With From Austin With Soul, Clark has painted his masterpiece. Few artists rival Clark's ability to sing as soulfully as Al Green and play guitar with such tasteful precision." Billboard celebrated the release, calling Clark, "Superb. He's a soulful vocalist and a tasty guitarist with an enormous amount of talent." Non-stop touring--including a performance at the 2002 Chicago Blues Festival--kept Clark's star high and rising. 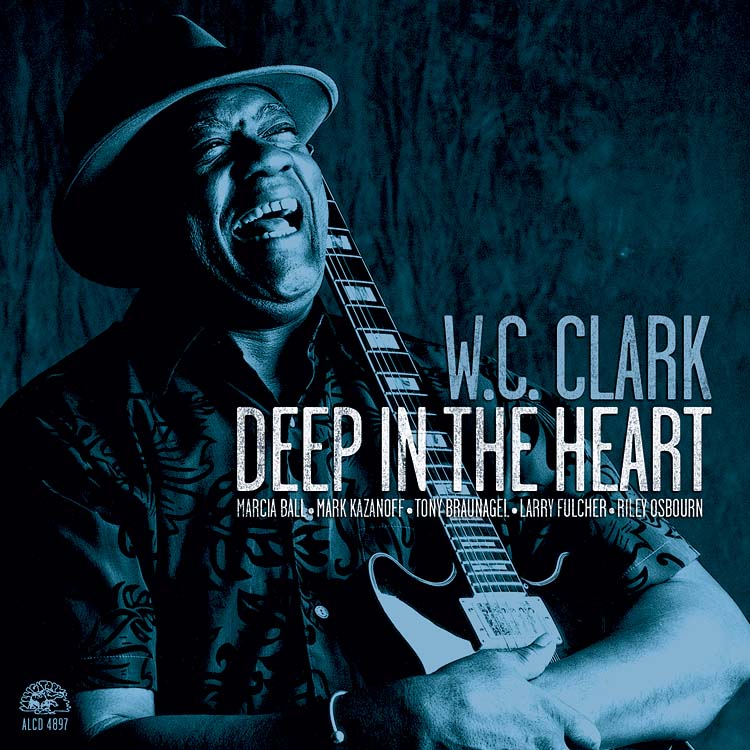 W.C. Clark
Deep In The Heart 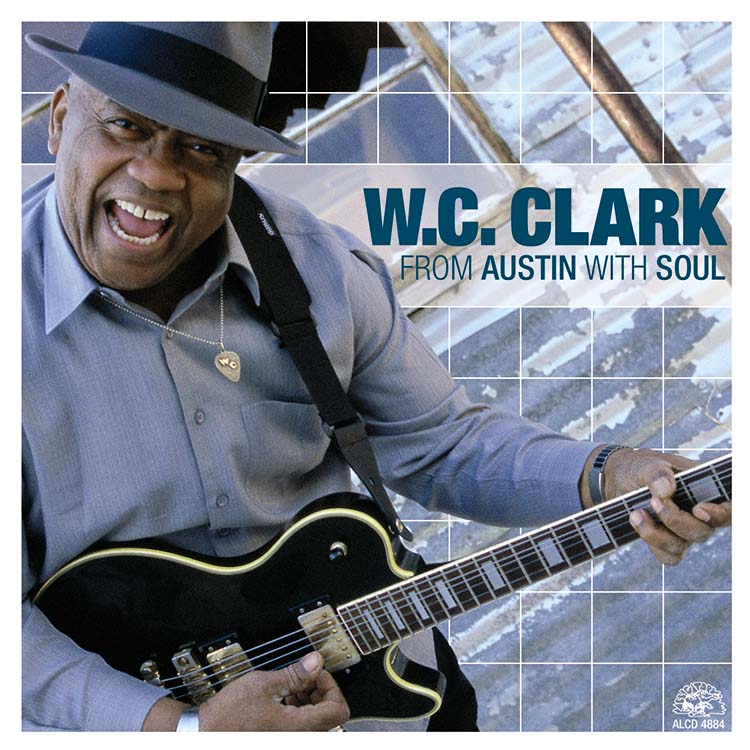 W.C. Clark
From Austin With Soul