Rock & Roll is a tribute to Ingram's mother, the late Princess Pride, and is Ingram's first original song since his Grammy-nominated debut album, Kingfish


She made a deal with the angels and they'll never let go
I'm gonna sell my soul to Rock and Roll
—Kingfish, Rock & Roll 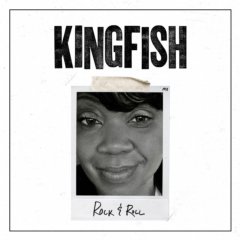 On Friday, July 24, rising star blues guitarist, vocalist and songwriter Christone “Kingfish” Ingram releases his emotionally riveting new song, Rock & Roll. The track, originally composed by Nashville-based songwriters Sean McConnell and Ashley Ray, and adapted and personalized by Ingram, is a loving tribute to Ingram's mother, Princess Pride, who passed away in December, 2019. Pride, a single mother, worked countless hours to make certain Christone had every opportunity to learn and to succeed, in music and in life.

Rock & Roll is the first original song Kingfish has released since his 2019 Grammy-nominated debut album, Kingfish. He recorded his moving vocals and impassioned guitar solos in Memphis at Willie Mitchell's famed Royal Studios. The song was produced by Nick Goldston.

After hearing the song, Ingram personalized McConnell's and Ray's lyrics, adding the third verse and revising parts of the first two verses and the chorus. According to Ingram, "Rock & Roll is a special song. It’s a track about my relationship with my biggest champion — my mom. The true to life lyrics reflect my mom's dedication to me as her son. I would not be where I am today without her unwavering love and support. Further, as a musician who is recognized for blues, the chorus is important because it refers to the Robert Johnson ‘selling his soul’ story, and is a direct nod to blues history and its influence on rock & roll."

Songwriter Ray adds, "I'm honored that Christone was able to see his family in the song, and that he was able to add and revise lyrics to reflect his experience with his mom. As young musicians, there are some similarities in our important relationships with our mothers. I am moved that he wanted to record this song. It's a beautiful tribute to his mom."

Since the release of his debut album Kingfish, 21-year-old Clarksdale, Mississippi native Ingram has earned hordes of new fans. In addition to his Grammy nomination, he won five 2020 Blues Music Awards, including Album Of The Year, Best Guitarist and Best Emerging Artist. He is currently nominated for three Living Blues Awards and two Blues Blast Awards. Kingfish has been featured in newspapers, magazines, and on radio and television. In addition to headlining his own tours, Ingram has performed with Buddy Guy, Vampire Weekend and Jason Isbell. Kingfish debuted at #1 on the Billboard Blues and Heatseekers charts and has remained on the Blues chart ever since. The song Fresh Out was the most played track in 2019 on Sirius/XM’s Bluesville channel. Songs from the album continues to receive regular airplay on radio stations around the world. Ingram was interviewed by Sir Elton John on John's Apple Beats podcast. He also appeared (honoring Buddy Guy) on PBS Television's Austin City Limits. NPR Music named Ingram a 2020 Artist To Watch, and included Kingfish as one of the Best Debut Albums Of 2019. Tastemaker UK music magazine MOJO named Kingfish the #1 Blues Album of 2019.