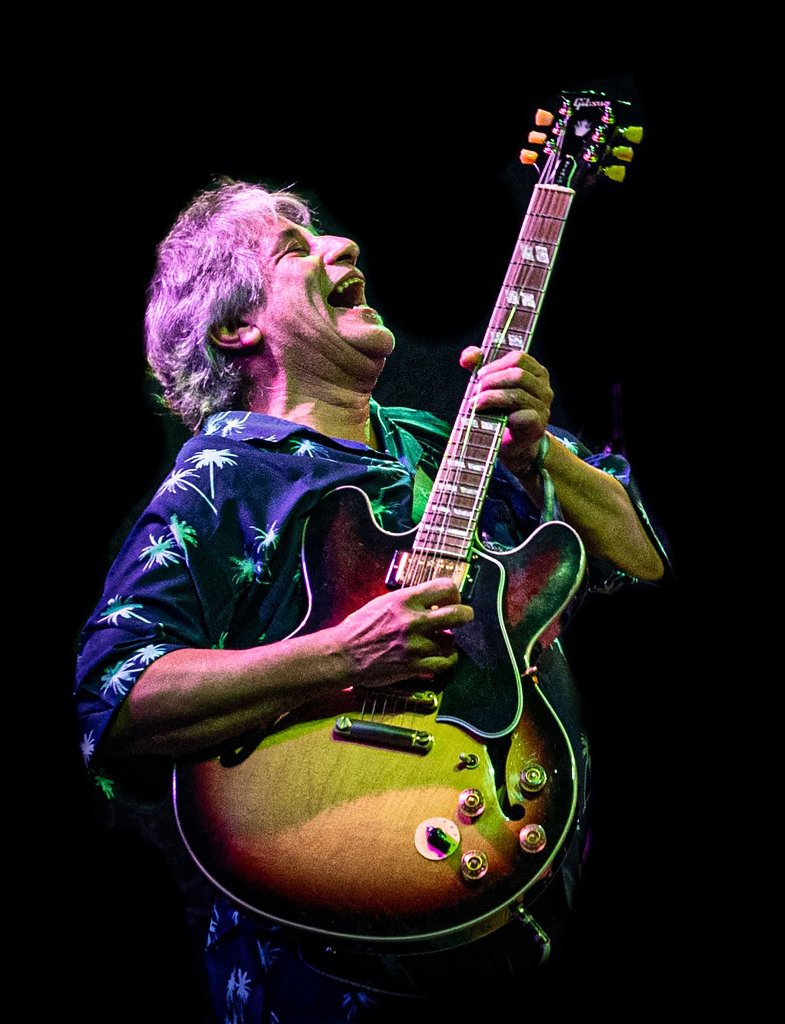 "Hands down my favorite blues player on the scene today. He’s an absolute blinder of a guitarist, with the voice of B.B. King and the chops of Albert King." —Joe Bonamassa

"Chris Cain is a hot-shot guitarist and a singer with the maturity of blues masters like Bobby Bland and B.B. King." —The Washington Post

Among the greatest compliments a musician can receive is praise from his fellow artists. With more than three decades of touring and fourteen previous albums, master blues guitarist and vocalist Chris Cain has earned his reputation as a musician's musician. Since his first release in 1987, Cain has created his very own blues sound inspired by his heroes--B.B. King, Albert King, Ray Charles, Albert Collins, Grant Green and Wes Montgomery. His jazz-informed blues guitar playing is fiery, emotional and always unpredictable. His vocals--gruff, lived-in and powerful--add fuel to the fire. His indelible original songs keep one foot in the blues tradition and both eyes on the future. The pure joy Cain brings to his playing and singing is palpable, and draws fans even closer in.

Upon first discovering Cain in 1987, Guitar Player raved, "Cain is an impressive, top-notch guitarist. His full-bodied tone and surprisingly big voice packed a punch that had me reeling." The Washington Post declared, "Chris Cain is a hot-shot guitarist and a singer with the maturity of old blues masters like Bobby Bland and B.B. King." Guitar icon Robben Ford said, "Chris Cain is for real. He's a great blues player with an intensity that keeps you on the edge of your seat, wondering what he's going to do next. Plus he knows how to write a song you haven't heard before, full of humor and insight. If you like the blues you'll like Chris Cain. I am a stone fan."

With his Alligator Records debut album, Raisin' Cain, Chris Cain says he is at a new point in his career. "I'm playing and writing better than ever before. I can say more with less," he says, referring to his dynamic guitar playing and superb songwriting. "My songs are funky and danceable and my writing is now less personal diary than in the past. I want my songs to tell universal stories." Recorded in San Jose at producer and multi-instrumentalist Kid Andersen's Greaseland Studio, Raisin' Cain features twelve original Cain compositions. From the deeply autobiographical Born To Play to the humorous and rocking Hush Money to the late-night jazzy blues of I Don't Know Exactly What's Wrong With My Baby, Cain's songs deliver uncommon, surprising hooks and riffs coming in rapid-fire succession. On four songs, Cain shows off his stellar keyboard skills, and on the far-out instrumental Space Force, he proves himself a funky and jazzy ARP Soloist player. Along with Cain is his road-tested band, bassist Steve Evans and keyboardist/organist Greg Rahn, with Chris' touring drummer Sky Garcia and veteran D'mar Martin (Little Richard, Rick Estrin & The Nightcats) sharing the skins.

Joining Alligator Records is a dream come true for Cain, who grew up idolizing label giants like Hound Dog Taylor and Son Seals. "Alligator cares so much about the music and the artists," Cain says. "I'm really excited to be a part of it. And I've got the best pack of tunes I've ever written."

Similarly, label president Bruce Iglauer is thrilled to welcome Cain into the Alligator family. "Chris Cain is a brilliant and soulful blues guitarist, vocalist and songwriter--and a terrific keyboard and sax player too. He's won devoted fans around the world on top of being a true musician's musician. He is spoken of with awe by his fellow bluesmen. Chris has cut fourteen previous albums, none more exciting than Raisin' Cain. We're looking forward to bringing Chris' music to a wider audience than ever before."

Chris Cain was born in San Jose, California in 1955. His parents were huge music fans and shared their love of blues, jazz and popular music with Chris. His African American father and Greek mother both loved music and had a huge record collection. His father first took Chris to see B.B. King when Chris was three, and, says Cain, "we never missed another show." Thanks to his parents' musical passion, young Chris saw almost every blues, jazz and rock artist that came through town, many of them repeatedly: James Brown, Albert King, Johnny Winter, Jimi Hendrix, even The Beatles. He picked up his first guitar at age eight and learned lick after lick, song after song. He'd listen to his father's records over and over until the music had seeped into his soul.

Cain's rough-and-tumble East San Jose neighborhood was a melting pot of soul, rock, blues, jazz and Latin sounds, and he absorbed it all as his guitar playing improved. By the time he was in his teens, he was starting to get noticed. In 1976, local San Jose singer and harmonica player Gary Smith gave Cain his first professional job playing guitar in his band. During this time Cain studied jazz at San Jose City College and soon began teaching jazz improvisation there.

Cain formed his first band in 1986, and, in the hopes of getting more gigs, released his first album, Late Night City Blues, on the locally-based Blue Rock'It label. Almost immediately, everything changed. Booking agents came calling and Chris began touring Europe before he knew what hit him. The album received four W.C. Handy Award nominations (now the Blues Music Awards) and the offers to perform kept rolling in. He even opened for his heroes Albert King and Albert Collins, who both asked Chris to jam on stage. The more Cain toured and recorded, the greater his reputation grew. Four more albums on Blue Rock'It and three for Blind Pig Records kept Cain busy on the road for the better part of every year. AllMusic said Cain delivers "slow-burning, contemporary blues that positively swings...a tour-de-force. Licks are clean, warm and fluid. He seamlessly bounces between R&B, funk, jazz, jump blues and Chicago blues...refreshing and diverse."

For over three decades, Cain has toured all over North America and made repeated trips around the world. He's performed at the Chicago Blues Festival, The Doheny Blues Festival, The Philadelphia Blues Festival, The Waterfront Blues Festival in Portland, and many others. He's played concerts and festivals in Argentina, Uruguay, Italy, Spain, France, Belgium, The Netherlands, Sweden, Norway, Switzerland, Australia, New Zealand, Russia, the Ukraine, and more.

Now, with Raisin' Cain, Chris Cain is ready to reach his largest audience yet. He'll tour non-stop and host guitar clinics when he can. Cain is always happy to share his talent with fans and fellow musicians. "I'm as much a fan as a musician," Cain says. "And I'm as excited to be making music today as I was when I was a teenager. More than ever before, I just play what I feel." 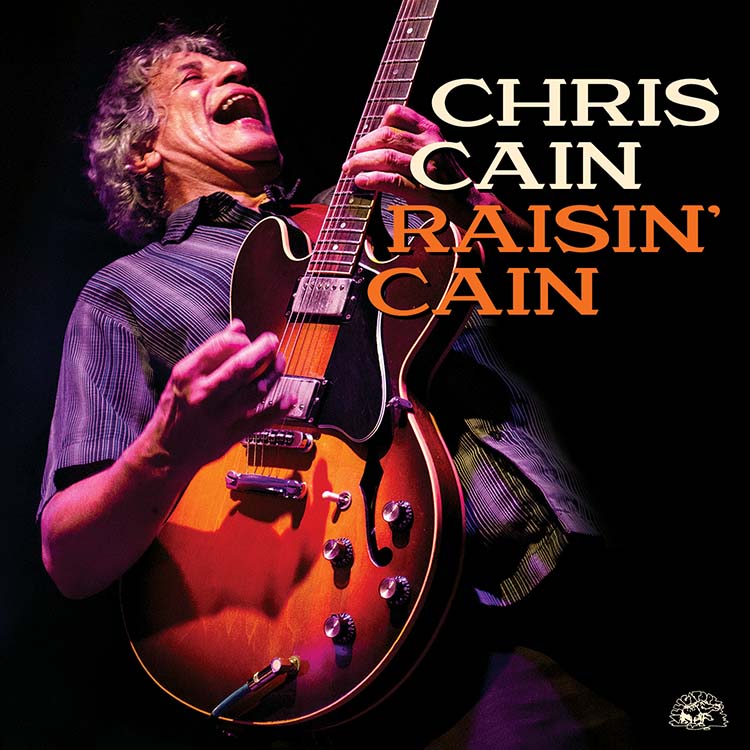