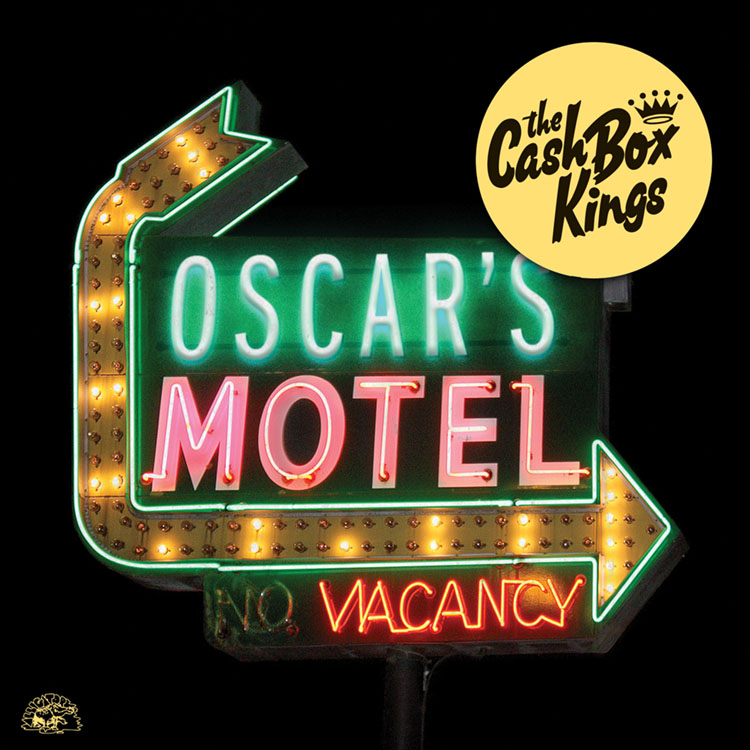 Singer Oscar Wilson and singer-harpist Joe Nosek are experts in classic Chicago grooves but they also enchant with original songs both funny and pointed.
—MOJO (UK)

Oscar Wilson’s powerful and deep voice harkens back to the golden age of Chicago blues. Nosek blows spirited, muscular harp. The Cash Box Kings serve up undeniable proof that they remain one of the top blues bands of this era.
—Blues Blast Magazine

On Oscar’s Motel (their third album for Alligator and 11th overall), The Cash Box Kings bring contemporary authority and old-school authenticity to each of the album’s 11 tracks. The band—featuring guitarist Billy Flynn, drummer Kenny “Beedy Eyes” Smith, bassist John W. Lauler, and keyboardist Lee Kanehira—opens a door into the intoxicating spirit and sounds of 1950s and 1960s Chicago-based blues, and then they bring it all right up to the minute with Wilson and Nosek’s original, instantly memorable songs.

Oscar’s Motel was recorded in Chicago and produced by Nosek. Going into the studio, the band made some significant decisions. According to Nosek, “While we are never afraid to tackle any subject, we decided to put aside everyday problems and have a bit more fun. So, no songs about Covid and this time nothing too political. Our goal was to have Oscar’s Motel be a celebration, an open invitation to leave your troubles behind and have a carefree, down-home, good time.” One listen and it’s clear the band succeeded. The driving cinematic title track is a non-stop, blues-filled, barbeque-fueled party. The funky Down On The South Side is inspired by Wilson’s colorful, true-to-life past. According to Wilson, “It was such a glorious time. Growing up on the South Side, there was a tavern on every corner with a band playing and music coming from front porches on every block.”

The history of The Cash Box Kings begins in Madison, Wisconsin where Nosek founded the band in 2001. Since 2007, his co-leader has been the charismatic, larger-than-life Chicago blues vocalist Oscar Wilson. Over 20 years apart in age and coming from vastly different backgrounds, the two form an unlikely pair, combining Wilson’s indisputably authentic South Side Chicago blues vocals and gritty, street-smart songwriting chops with Nosek’s storytelling vocals, dynamic harmonica and witty tunesmithing. According to Wilson, “The Cash Box Kings are a throwback to the golden age of blues with some kickin’ fresh young blood. Joe is my best friend in the music world—the band is a marriage made in heaven for both of us.” Says Nosek, “We have each other’s backs. We’re family.”

With ten previous releases to their credit and thousands of live performances under their belt,  The Cash Box Kings have won widespread acclaim throughout the blues world. Their Alligator Records debut, 2017’s Royal Mint, was named among the Top Ten Blues Albums of the Year by MOJO magazine. 2019’s Hail To The Kings! continued the trend, with the band receiving three Blues Music Award nominations, praise from media including NPR, The Chicago Tribune, AllMusic.com, Living Blues, Blues Music Magazine, the UK’s MOJO and Blues & Rhythm, and radio airplay across the globe, including heavy rotation on SiriusXM's Bluesville.

No matter where The Cash Box Kings perform, they bring the music to fuel the party. Between Wilson’s natural blues vocal power and Nosek’s talent at wringing every last drop of emotion from his harmonica, The Cash Box Kings never fail to wow their longtime fans while earning new ones at every gig. Now, with tour dates scheduled throughout the year, The Cash Box Kings invite everyone to leave their worries at home and check into Oscar’s Motel, where the music is always just getting started.