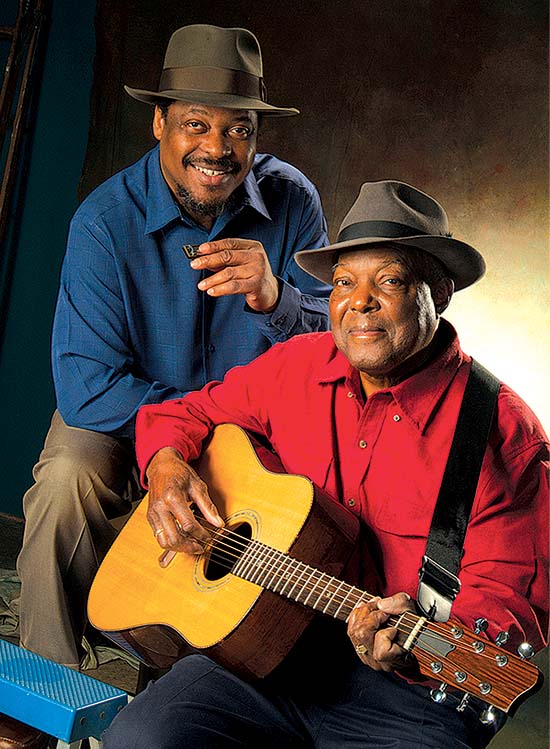 Almost immediately after guitarist/vocalist John Cephas joined forces with harmonicist/vocalist Phil Wiggins in 1978, the blues community took them to heart. Critics and fans proclaimed them as the new champions of the East Coast Piedmont style of blues, a style of music first popularized by artists like Blind Boy Fuller, Rev. Gary Davis, Blind Willie McTell and Blind Blake. They performed for people all over the world, from clubs for only a handful of people to major blues festivals in front of thousands. They even entertained at President Clinton’s inaugural party in 1997.

Cephas & Wiggins — whose style and appeal was often compared to that of an earlier Tidewater duo, Sonny Terry & Brownie McGhee — kept the tradition alive by infusing it with their own originality, vitality, and, most importantly, fun. The duo celebrated the gentle, melodic blues style of the southeastern U.S. with every performance. According to Living Blues, Cephas & Wiggins were “today’s premier blues guitar and harmonica duo.” The Washington Post  said, “Remarkable guitar and harmonica duets. Their infectious rhythms and supple melodies combine tasteful fingerpicking with impassioned harmonica solos.”

Because both Cephas and Wiggins were born in Washington, D.C., they brought an urban sophistication to the traditional rural blues they perform. With their final album (and fourth for Alligator), Shoulder To Shoulder, Cephas & Wiggins’ spirited and seamless mix of both original and classic material shed a bright light on Piedmont blues. Of the album’s 12 songs, Cephas wrote or co-wrote six. With the solid mix of brilliantly played music fueled by Cephas’ gently rolling guitar and vocals and driven by Wiggins’ freight train chugging harmonica, Shoulder To Shoulder was the antidote for anyone who still thinks blues music is a soundtrack for sadness. According to Wiggins, “People automatically think of sadness and depression when they think of blues. But the blues is uplifting music, music to rejuvenate you, to nourish the spirit. When you get down, the blues will pick you up again.” The duo was joined by pianist Ann Rabson (of Saffire–The Uppity Blues Women) on six tracks, pianist Daryl Davis on one and bassist Andrew Volpe on two.

John Cephas was born in Washington, D.C. in 1930 into a deeply religious family and raised in Bowling Green, Virginia. His first taste of music was gospel, but blues soon became his calling. After learning to play the alternating thumb and fingerpicking guitar style that defines Piedmont blues, John began emulating the records he heard by Blind Boy Fuller, Blind Blake, Rev. Gary Davis and other early blues artists. Aside from playing blues, John worked early on as a professional gospel singer, carpenter and Atlantic fisherman. By the 1960s, he was starting to make a living from his music. After hooking up as a duo with Wiggins in 1977, he performed all over the world, serving as an ambassador of this singular American art form. Among his many endeavors, John served on the Executive Committee of the National Council for the Traditional Arts, and testified before Congressional committees. He was also a founder of the Washington, D.C. Blues Society. “More than anything else,” said John, “I would like to see a revival of country blues by more young people…more people going to concerts, learning to play the music. That’s why I stay in the field of traditional music. I don’t want it to die.”

Phil Wiggins was born in Washington, D.C. in 1954. He began his musical career with some of Washington’s leading blues artists, including Archie Edwards and John Jackson, and attributes his style to his years spent accompanying locally popular slide guitarist and gospel singer Flora Molton. His harmonica sound developed from listening to piano and horn players, as well as the music of Sonny Terry, Sonny Boy Williamson I, Little Walter, Big Walter Horton and Junior Wells. Phil also apprenticed with Mother Scott (a contemporary of Bessie Smith). Phil first met John in 1976 at the Smithsonian National Folklife Festival in Washington, D.C. Along with pianist Wilber “Big Chief” Ellis and bassist James Bellamy, John and Phil formed the Barrelhouse Rockers. A year after Ellis’ death, the duo of Cephas & Wiggins was born. Besides being a renowned harmonica player, Wiggins is also a gifted songwriter and singer whose material helped define the duo’s sound.

By the 1980s, the international blues community recognized this marvelous acoustic twosome as the leading exponents of traditional Tidewater blues. While overseas in 1981, they recorded two albums, Living Country Blues and Sweet Bitter Blues, for the German L&R label. Often under the auspices of the U.S. State Department, the two spent much of the 1980s abroad, playing Europe, Africa, Central and South America, China, Australia and New Zealand. In 1988, they were among the first Americans to perform at the Russian Folk Festival in Moscow. Cephas & Wiggins recorded their first domestic album, Dog Days Of August (Flying Fish Records), in 1987 in John’s living room, and it quickly won a Blues Music Award for Best Traditional Blues Album of the Year. In 1989, John received a National Heritage Fellowship Award. Often called the “Living Treasure Award,” this is the highest honor the United States government offers a traditional artist.

Aside from their busy performance schedule, both Cephas and Wiggins also did their share of acting. In 1991 John portrayed a blind bluesman in the Kennedy Center production of Blind Man Blues. Phil was in the cast of Matewon, a prize-winning Hollywood film. Together they appeared in the stage production of Chewing The Blues and in the documentary films Blues Country and Houseparty. The duo performed in the stage production of Zora Neal Hurston’s play, Polk County, in Washington, D.C. They were also featured in four nationally touring arts programs sponsored by the National Council for the Traditional Arts: Masters of the Steel String Guitar; Juke Joints and Jubilee; Saturday Night and Sunday Morning and Echoes of Africa.

In 1996, after two successful albums for Flying Fish, Cephas & Wiggins made their Alligator debut with Cool Down. The vibrant collection of original and traditional country blues hid its complexity in the duo’s simple, effortless delivery. “Easy to love,” said The Associated Press. Jazz Times called the album “a pure, unadulterated country blues gem.” 1999 saw the release of Homemade, and 2002’s Somebody Told The Truth followed. The Washington Post declared, “Cephas & Wiggins are giants, weaving Wiggins’ harmonica and Cephas’ voice and guitar together so seamlessly that one mind seems to govern both mouth and all four arms…a marvelous and essential journey.”

The success of Cool Down, Homemade, and Somebody Told The Truth helped establish Cephas & Wiggins as key figures in the resurgence of interest in country blues, as seen in the success of acoustic artists like Corey Harris, Alvin Youngblood Hart, Guy Davis, Chris Thomas King and others. “No pretense here,” hailed The Chicago Tribune describing a typical Cephas & Wiggins performance, “just down-home, traditional country blues delivered with feeling.” At hundreds of concerts at major festivals, concert halls and colleges (not to mention the many workshops the two conduct), Cephas & Wiggins brought energetic good times to each performance, winning new fans everywhere they went.  Cephas & Wiggins’ brought the Piedmont blues from the White House to festival stages all over the world. They played together until John's death on March 4, 2009. Phil has continued a very active career and continues to be honored as one of the blues' finest harmonica players 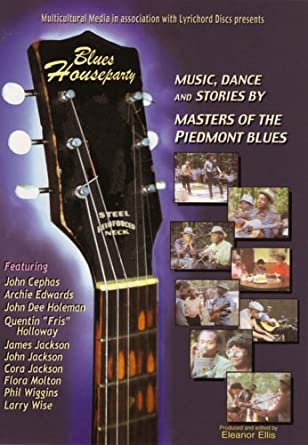 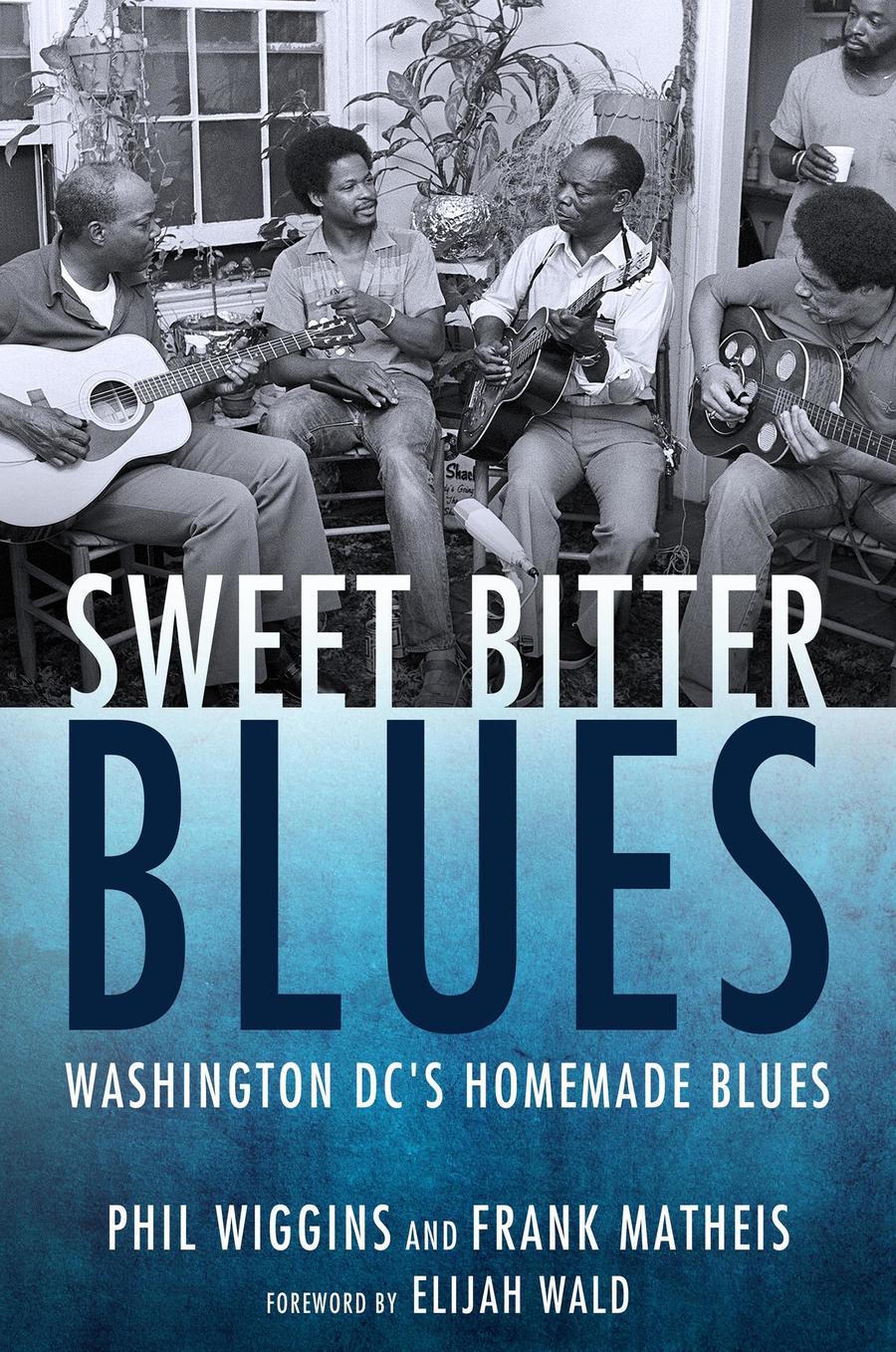 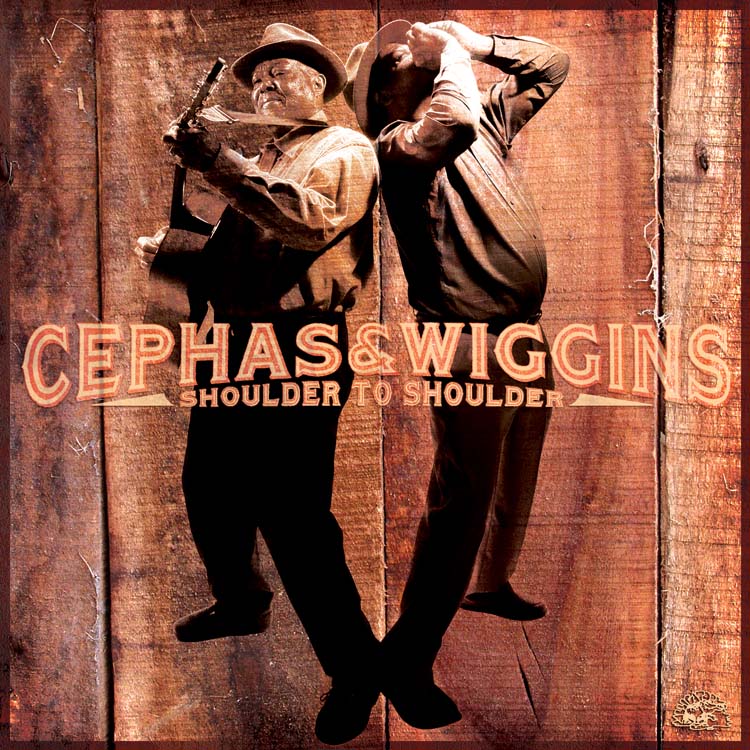 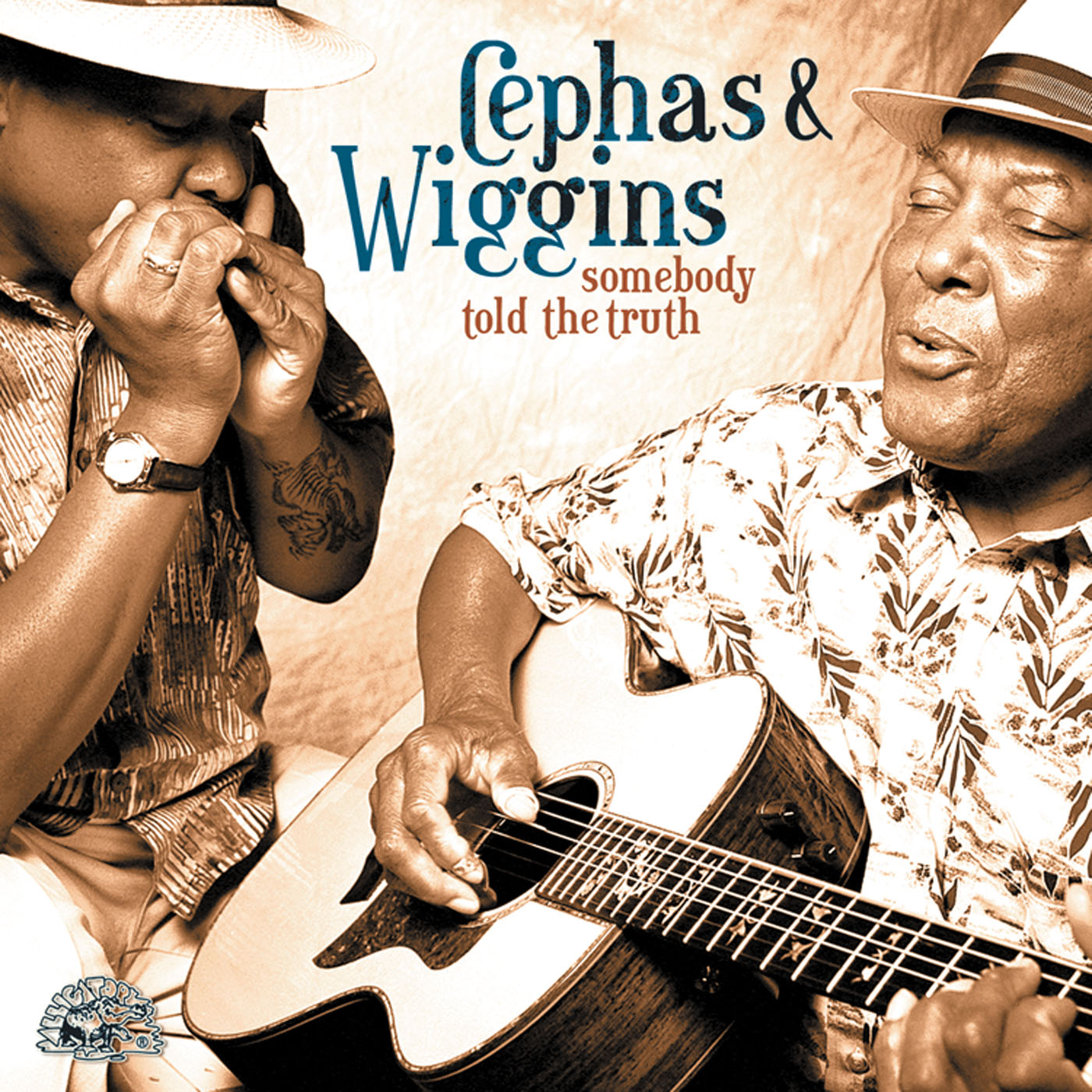 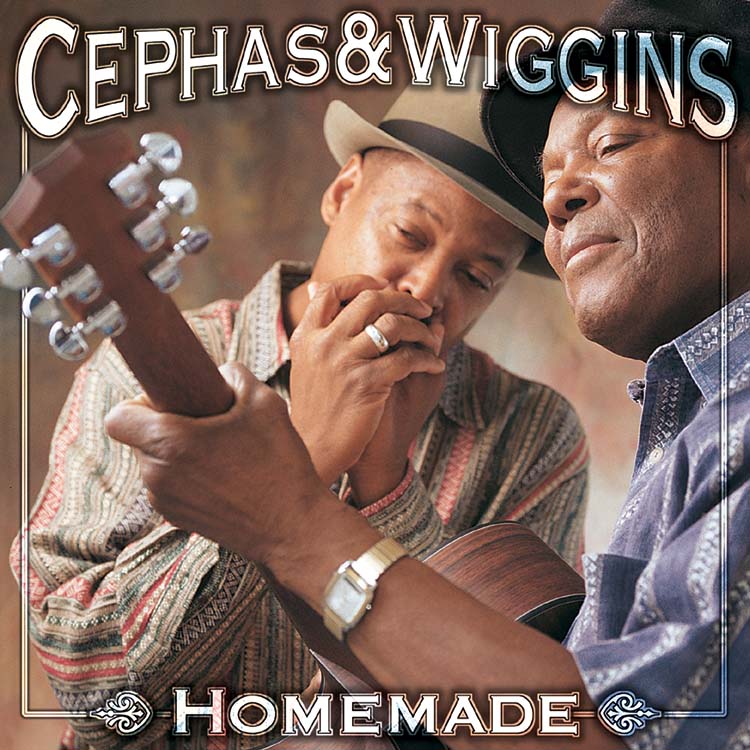 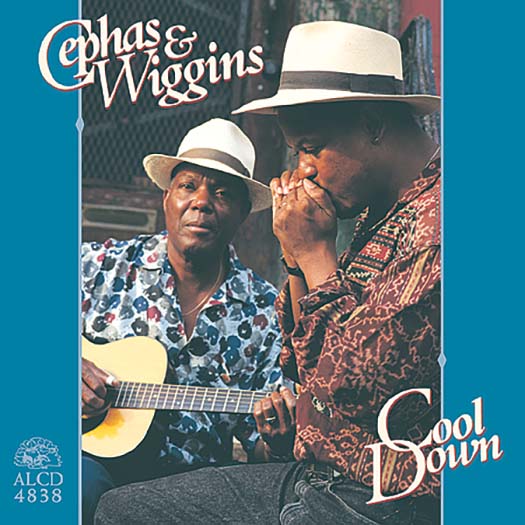