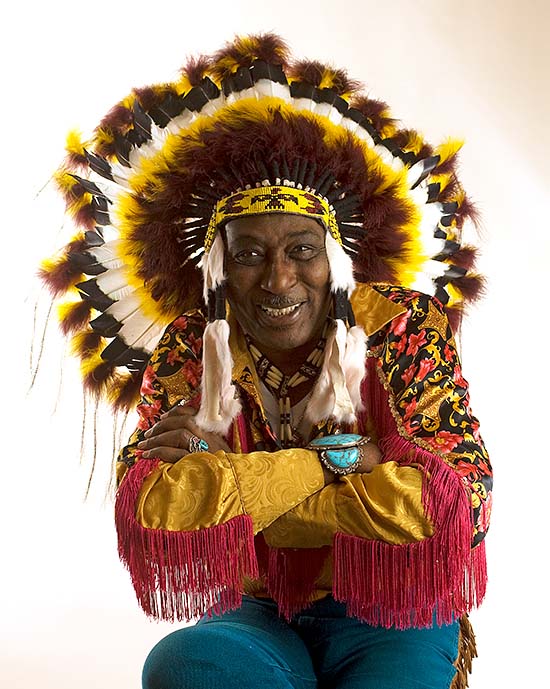 “Joyous rave-ups...Clearwater testifies with stunning soul fervor and a powerful guitar. One of the blues’ finest songwriters” –Blues Revue

“Clearwater is equally adept at Chuck Berry-style guitar as he is at deeper blues style. He’s a fine singer who puts on a wild, exciting show...the sort of exuberant entertainer who can turn a concert into a party” –New York Times

Grammy-nominated Chicago blues legend Eddy “The Chief” Clearwater died of heart failure on Friday, June 1, 2018 in his hometown of Skokie, Illinois. He was 83. During the 1950s, Chicago’s West Side was a breeding ground for some of the world’s greatest bluesmen. Magic Sam, Otis Rush, Freddie King and others ruled the clubs. With his fierce guitar playing, soulful and emotive vocals and wild stage shows, Eddy “The Chief” Clearwater easily belongs on this list. A Chicago legend, Clearwater was an intense, flamboyant blues-rocking showman. He was equally comfortable playing the deepest, most heartfelt blues or rocking, good-time party music. DownBeat said, “Left-hander Eddy Clearwater is a forceful six-stringer...He lays down some gritty West Side shuffles and belly-grinding slow blues that highlight his raw chops, soulful vocals, and earthy, humorous lyrics.”

Between his slashing left-handed guitar work, his room-filling vocals, his self-defined “rock-a-blues” style (a forceful mix of blues, rock, rockabilly, country and gospel), his boundless energy and even his signature Indian headdress, Clearwater is among the very finest practitioners of the West Side blues working today. The blues world recognized his talent by giving him the Blues Music Award for Contemporary Blues – Male Artist of the Year in 2001. 2003’s Rock ‘N’ Roll City was nominated for a Grammy Award. His very first Alligator CD, WEST SIDE STRUT, was released in 1998.

WEST SIDE STRUT, produced by young hotshot guitarist Ronnie Baker Brooks (son of the legendary bluesman Lonnie Brooks), is an energized mix of West Side blues and old school rock injected with a tough, up-to-the-minute contemporary edge. Featuring some of Eddy’s hottest playing ever recorded, the CD burns with his stinging guitar and rough-and-ready vocals. Guests include Eddy’s old friends Lonnie Brooks, Jimmy Johnson, Billy Branch and Otis Clay as well as Ronnie Baker Brooks himself, playing some scintillating guitar parts. The 12 songs (including seven songs either written or co-written by Eddy) lean from straight-ahead blues and humorous rockers to plaintive, emotion-packed ballads. All are brought to vivid life by Eddy’s ferocious and unflinching guitar playing, his power-packed vocals and unlimited energy, hard-earned by his years of experience. GuitarOne said Clearwater takes his listeners on “an inspired trip to that rollicking crossroads where the blues and rock collide.”

Born Edward Harrington (a cousin of late harpist Carey Bell Harrington) on January 10, 1935 in Macon, Mississippi, Eddy and his family moved to Birmingham, Alabama in 1948. With music from blues to gospel to country & western surrounding him from an early age, Eddy taught himself to play guitar (left-handed and upside down), and began performing with various gospel groups, including the legendary Five Blind Boys of Alabama. After moving to Chicago in 1950, Eddy stayed with an uncle and took a job as a dishwasher, saving as much as he could from his $37 a week salary. His first music jobs were with gospel groups playing in local churches. Quickly though, through his uncle’s contacts, he met many of Chicago’s blues stars. Eddy fell deeper under the spell of the blues, and under the wing of blues star Magic Sam, who would become one of Eddy’s closest friends and teachers.

By 1953, as Guitar Eddy, he was making a strong name for himself, working the South and West Side bars regularly. He met and befriended everyone from Sunnyland Slim to Earl Hooker, picking up licks and lessons along the way. After hearing Chuck Berry in 1957, Eddy added that rock and roll element to his already searing blues style, creating a unique sound that defines him to this day. He recorded his first single, Hill Billy Blues, in 1958 for his uncle’s Atomic H label under the name Clear Waters. His manager at the time, drummer Jump Jackson, came up with the name as a play on Muddy Waters.

After a successful appearance on a Chicago television show called Bandstand Matinee in 1959, Clearwater recorded another 45 for Atomic H, I Don’t Know Why, and he started receiving more and more local radio airplay with singles for LaSalle, Federal, Versa and his own Cleartone label. The name Clear Waters morphed into Eddy Clearwater, and Eddy rarely was in need of a place to play. He worked the local circuit steadily throughout the 1950s, 1960s and into the 1970s, finding success among the North Side college crowd who responded to his individual brand of blues, his rock and roll spirit and his high energy stage show.

Twice during the 1970s he toured Europe (the first time with Buddy Guy and Junior Wells) and even appeared on BBC television in England. His first full-length LP, 1980’s The Chief, was the initial release on Chicago’s Rooster Blues label. Wearing a full Indian headdress on the cover (an homage to his Cherokee blood), The Chief, as he was now known, reached the largest audience of his career. Recording numerous albums for various labels during the 1980s and 1990s, Eddy’s star continued to rise. He received piles of positive press and was nominated for seven Blues Music Awards. His 2003 CD Rock ‘N’ Roll City paired him up with the surf-rocking Mexican wrestling-masked group, Los Straitjackets. The album was nominated for a Grammy Award and earned Eddy a multitude of new fans.

Between the untamed guitar work, the tough and gruff vocals and the strength of the songs, 2008's old-school yet contemporary WEST SIDE STRUT was a career highlight for the bluesman. Clearwater loved to perform. He played everywhere from Russia, Turkey, and Romania to Brazil and Alaska.

1995 Boogie My Blues Away, Delmark 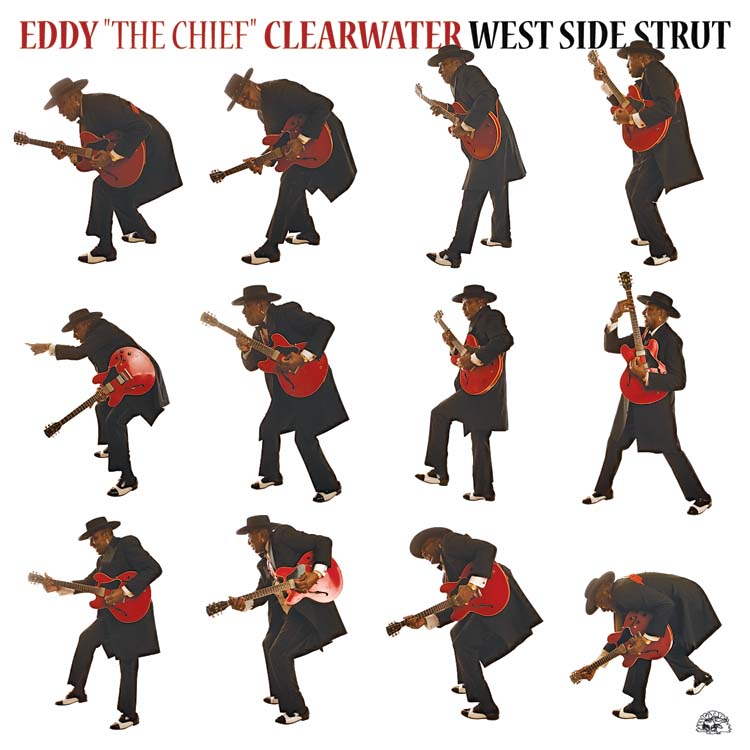 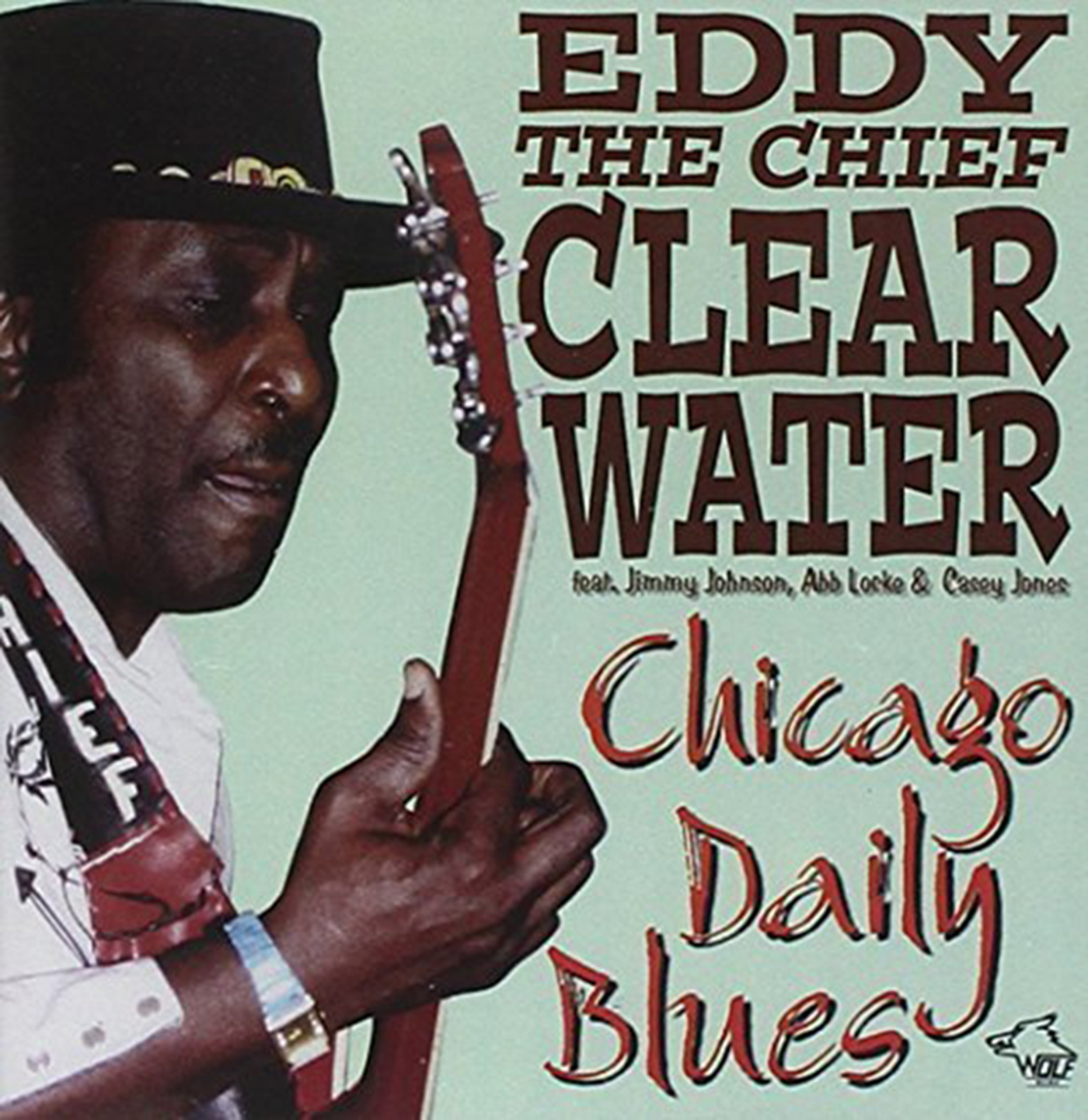