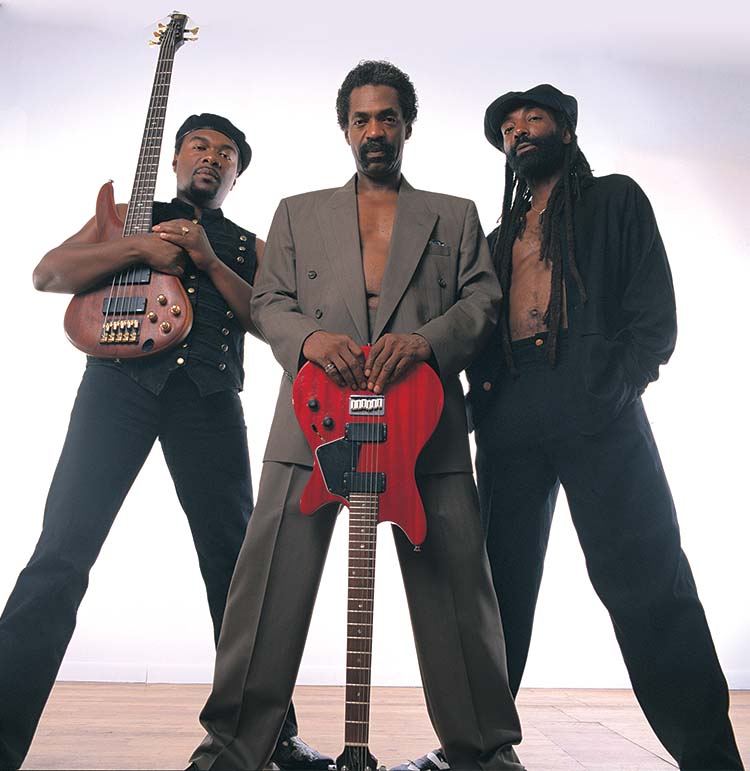 Walking down the road to the burning edge of rock and roll...aggressively mixes the blues of the city with the rock of radio...soul blues with a nasty touch. - Guitar

On the edge, these bluesbreakers are paving the way between the blues and rock, reggae and soul. Their sensibility is thoroughly modern while remaining authentically grounded...original and distinct. -Downbeat

It's been nearly 35 years since Gary, Indiana's Kinsey Report first burst upon the national blues scene with their blistering brand of streetsmart, up-to-the-minute, funky blues-rock. Over the course of four critically acclaimed albums (two for Alligator and two for Pointblank) and endless national touring, the Kinsey brothers' guitarist/vocalist Donald, drummer Ralph and bassist Kenneth have blazed a modern trail of powerful, original radio-friendly music that grabs both die-hard blues fans and rockers who love supercharged guitar and boneshaking vocals.

With their new release, Smoke And Steel (AL 4860), The Kinsey Report return to Alligator Records and lay out their modern blues vision for music lovers everywhere to enjoy. Led by Donald's soulful vocals and explosive guitar playing and powered by the airtight rhythm section of Ralph and Kenneth, Smoke And Steel features seven of 12 Kinsey originals, along with powerful versions of Bob Seger's Fire Down Below and John Fogerty's Rattlesnake Highway. From the streetwise lyrics of This Old City and Code Of The Streets to the soulful and moving Loved Ones to the foot-pounding urgency of Time Is Running Out, The Kinsey Report fire on all cylinders, the band a precision engine running at full speed. Recorded in Chicago and produced by The Kinseys along with Alligator Records president Bruce Iglauer, Smoke And Steel will no doubt go down not only as a defining moment for The Kinsey Report, but as a gateway into the next century of blues.

The Kinsey Report developed its singular sound from a lifetime of working and sweating together on stage and in the studio. Their father and musical mentor, the late Mississippi-born Lester 'Big Daddy' Kinsey, a bluesman known for his Delta slide guitar and harmonica playing,  introduced his sons to gospel and blues early on. Big Daddy's daddy, firebrand preacher Lester Kinsey, Sr., pastored Gary's Chase Street Church of God in Christ for close to 50 years. As youngsters, Donald, Ralph and later Kenneth, saw first-hand the emotional power of music in their grandfather's church. Ralph received his first snare drum when he was five, the same age younger brother Donald was when he got his first guitar. By the time Donald was thirteen, he was an accomplished guitarist who performed with Big Daddy around Gary as Big Daddy Kinsey and B.B. King, Jr. During the late 1960s, Big Daddy began taking the family act on the road as Big Daddy Kinsey & His Fabulous Sons. The act disbanded in 1972 when oldest brother Ralph enlisted in the Air Force. That same year legendary guitarist Albert King recruited Donald as his rhythm guitarist. Donald appeared on two of King's Stax albums, I Wanna Get Funky and Montreux Festival . After Ralph left the service in 1975, Donald left King's band to form the heavy metal group White Lightning, along with his brother Ralph and former King bassist Busta 'Cherry' Jones. With ex-Mountain bassist Felix Pappalardi producing, the group cut a self-titled debut for Island Records. They toured nationally, performing with artists like Aerosmith, Yes, Jethro Tull, and Edgar Winter.

At an Island Records reception in New York, Donald met reggae superstar Bob Marley, who in turn introduced him to Peter Tosh. Tosh invited Donald to sit in on the recording of his album, Legalize It. Pleased with the results, Tosh invited Donald to join him on his upcoming tour. White Lightning was in the process of imploding, so Donald took the gig. After touring with Tosh for a year, Donald got a call from Marley asking him to overdub some guitar parts for Marley's album, Rastaman Vibration. Now Marley wanted Donald for his upcoming tour. Donald moved to Jamaica in 1976 and toured with Marley, appearing on the live album, Babylon By Bus. That year Rolling Stone voted Bob Marley and the Wailers Band Of The Year.  Despite all the success, Donald left the band after he was nearly killed in an assassination attempt on Marley's life.

Donald toured briefly with the Staple Singers before hooking up again with Tosh, playing on his Bush Doctor record and opening several dates with him on the Rolling Stones' 1978 U.S. tour. When the tour ended in California, Donald stayed and brought out his brother Ralph and friend Ron Prince to form the reggae/ funk/blues/rock band, The Chosen Ones. After a short hiatus Donald rejoined Marley for what was to be his final U.S. tour.  The Chosen Ones returned to Gary and recorded an EP in 1981 for the Faulty Products label. Success still eluding him, Donald hooked up again with Tosh, playing on his Mama Africa album and touring Africa and Europe. The album contained a hit version of Johnny B. Goode, arranged and co-produced by Donald, and he and Ralph co-wrote Where You Gonna Run, a single from that album.

The Kinsey Report came together in 1984, with Donald returning home to join Ralph in reforming the family band with Big Daddy. Youngest brother Kenneth took over the bass slot and old friend Ron Prince was added on second guitar. The band, Big Daddy Kinsey and the Kinsey Report, combined the sons'  funky, rock-influenced sound and their father's Mississippi Delta blues roots. In 1985, Donald produced his father's debut album, Bad Situation, for Rooster Blues, with backing by The Kinsey Report.

Alligator president Bruce Iglauer liked what he heard and saw of the young Gary blues-rockers, and brought his friend, guitarist Roy Buchanan to hear them live. Roy was equally impressed and asked Donald to play rhythm guitar on two of his Alligator releases. In 1986, Iglauer included one cut (Corner Of The Blanket) by The Kinsey Report in The New Bluebloods anthology. The strength of the song led Iglauer to offer the band a full album deal. Edge Of The City burst upon an unsuspecting blues world in 1988, leaving fans and critics open-mouthed with amazement, leading to three Blues Music Award nominations. Downbeat declared, "the band is telepathically tight, and its impact is devastating."  Musician called the album "a stunner." With great reviews in mainstream press and rock radio airplay, the band quickly grew from one of Chicago's most popular acts to a national phenomenon. They played clubs, concert stages and major blues festivals both in the U.S. and in Europe. Tour dates with Living Colour, Albert Collins, Dr. John and Hugh Masekela brought them to blues and rock fans all over the world.

Their follow-up, 1989's Midnight Drive, more than lived up to the promise of their debut. Another set of great songs and eye-popping guitar, along with more non-stop touring, brought the band world-wide recognition and acceptance. Guitar Player called Midnight Drive "one of the most exciting albums ever issued by Alligator... immaculate and soulful."  They signed with Pointblank and released two heavily rock-edged albums, 1991's Powerhouse and 1994's Crossing Bridges.

Smoke And Steel marks the Kinsey Report's return to Alligator, and the group is prepared to take their groundbreaking music to more people than ever before. "We're excited to be back on Alligator," says Kenneth. "I'm glad they've opened their arms to us," agrees Donald, "because the blues is really where our hearts are at." They'll hit the road in support of the album with a national tour kicking off in Chicago. With their crowd-pleasing mix of fiery guitar, funky, telepathic rhythms, streetwise lyrics and seemingly boundless energy, The Kinsey Report will reach from the smoke and steel of Gary, Indiana to every funky, blues-rocking corner of the world. 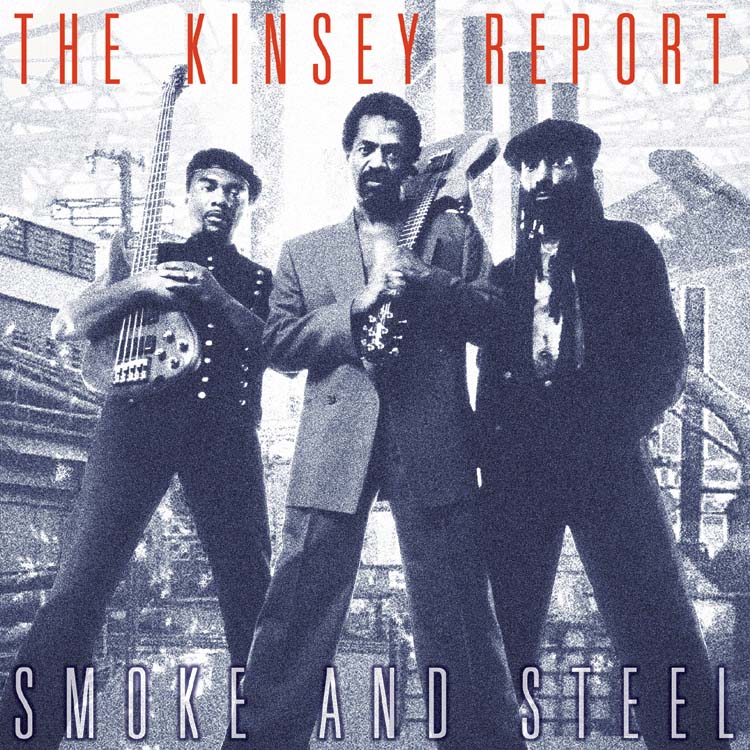 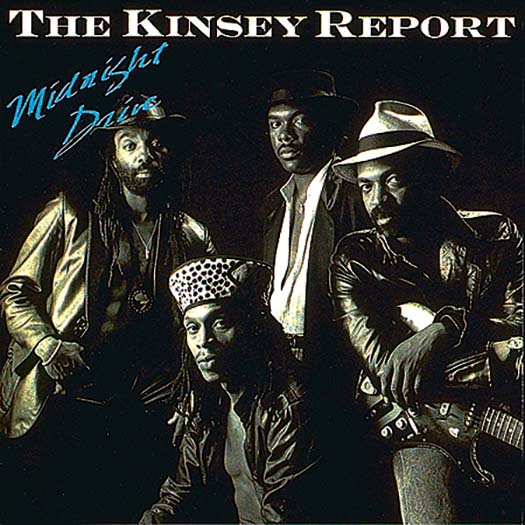 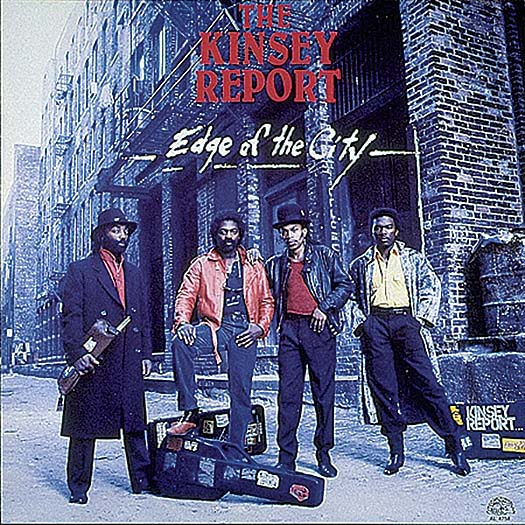 The Kinsey Report
Edge Of The City