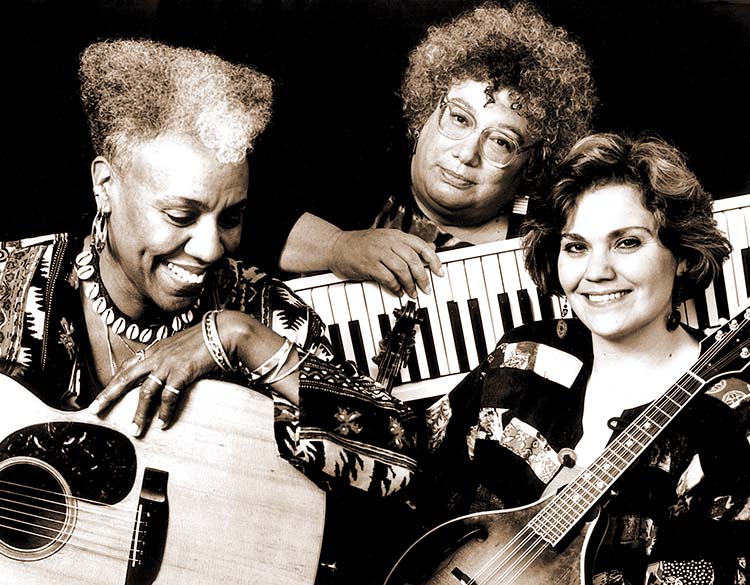 Ann Rabson, Gaye Adegbalola and Andra Faye, the spirited women of Saffire–The Uppity Blues Women, have never shied from speaking their minds. During the course of their 25-year career, words like ‘fearless,’ ‘inspiring,’ ‘witty,’ ‘joyful’ and ‘powerful’ have been used to describe their smart, sassy, and deeply emotional blues. A review in Ms. Magazine perfectly summed up the band’s incredible rise to the top: “Recipe for success: start with three talented musicians. Stir in rich melodies, honky-tonk rhythms and spicy-hot lyrics. Then add a bucketful of courage, the kind it takes to leave home and career in mid-life. Simmer for a few hours in smoky roadhouses and cheap motels. The result? Saffire–The Uppity Blues Women.”

The trio’s new Alligator CD, Havin’ The Last Word, will be their final declaration together as Saffire–The Uppity Blues Women; the group has decided it’s time to move on so they can pursue their own individual interests. But pianist/guitarist/vocalist Rabson, guitarist/harmonicist/vocalist Adegbalola and multi-instrumentalist/vocalist Faye have plenty to say with Havin’ The Last Word. From the uplifting opening track “Going Down To The River” to the saucy ode to aging, “Growing Older,” to the salacious “Bald Eagle” (Gaye’s hilarious follow up to fan favorite “Silver Beaver”) to the heartbreaking “Blue Lullaby,” Havin’ The Last Word is a showcase for the band’s stellar musicianship (including Gaye’s slide guitar solo debut on “Bald Eagle”), razor-sharp wit and provocative songwriting. As their fans have come to expect, the CD also features terrific vocals, rollicking piano, guitar, mandolin, fiddle, upright bass and harmonica.

Making their final record together in their hometown of Fredericksburg, VA was a true labor of love. “After nearly eight years, it was exciting to get back into the recording studio with my sisters,” Gaye Adegbalola recalls. “From song searches to songwriting, we worked really hard. Every song offers something special for the listener.” Ann Rabson also “wanted this farewell recording to be special, personal and historic.” Andra Faye agrees. “We all put our hearts and souls into every project, but this one is definitely special as it feels like the cap on our ‘legacy’.”

The decision to retire the band and go their separate ways was a natural progression. Gaye explains, “All three of us have different needs and different visions. For many years, our visions coincided and Saffire provided a realization of our visions. But, as we have aged and grown, our individual agendas have changed. The love has not changed. The love of the music and each other has not subsided. We continue to support each other’s varied visions—whether manifested on a front porch or in a world-wide, thousands-of-listeners arena.”

Saffire–The Uppity Blues Women burst onto the national music scene in 1990 with the release of their self-titled debut album, after six years of playing locally and regionally. With their brazen, no-holds-barred acoustic blues, Saffire took the music world by storm and earned legions of fans of all ages and genders around the globe. The group quickly went from being local favorites to internationally recognized blues stars, sharing stages with Koko Taylor, B.B. King, Ray Charles and Willie Dixon, who said of the band, “They knock me out.” National media like People, Entertainment Tonight, CNN’s Showbiz Today and National Public Radio’s Weekend Edition sang the band’s praises. With seven critically acclaimed albums, a large, loyal fan base, countless awards, and thousands of sold-out shows under their belts, plus a soon-to-be released documentary, Hot Flash, chronicling their storied history, Saffire–The Uppity Blues Women have achieved success beyond their wildest dreams.

Ann Rabson worked steadily as a professional musician and solo artist since 1962, gigging regularly while occasionally holding down various day jobs and becoming a single parent. Twenty-five years ago, Rabson decided to join forces with her guitar student, Gaye Adegbalola (a former award-winning 8th grade science teacher), and Saffire–The Uppity Blues Women began to take shape. After gigging around their hometown of Fredericksburg, Virginia and developing a substantial following, the two, along with the band’s original bassist, Earlene Lewis, quit their full-time jobs, pooled their money and recorded an album that they forwarded to Alligator Records’ president Bruce Iglauer. The original songs and the musicianship, but most of all the feisty personality that shone through, impressed Iglauer. Although he had never signed an all-acoustic act before, he couldn’t get them out of his mind. “I kept coming back to the tape over and over,” Iglauer recalls. “I just figured if I enjoyed it so much, other people would, too. But I never expected what actually happened.”

Their debut album, 1990’s Saffire–The Uppity Blues Women, became one of Alligator’s biggest selling releases ever. 1991’s Hot Flash, followed by 1992’s BroadCasting (with Andra Faye guesting on guitar, fiddle and mandolin after Lewis’ departure), took Saffire to even greater heights; Andra’s mastery of all things stringed and her country-tinged vocals added a new dimension to Saffire’s music. Constant touring and increased radio play earned the group new fans everywhere they went. “Even people who don’t like the blues can’t resist them,” declared The Washington Post, while The New York Times hailed them as “post feminist traditional blues, sung and played with gorgeous abandon.”

The band’s subsequent tour and album, 1994’s Old, New, Borrowed & Blue, brought Andra into the band full-time, and their fan base continued to swell. Features in Ms. and other magazines plus an interview on National Public Radio’s Fresh Air spread the word all across the country. Their subsequent albums, 1996’s Cleaning House, 1998’s Live & Uppity and 2001’s Ain’t Gonna Hush! earned the band hordes of new fans and mountains of critical acclaim. And in 2006 Alligator released their “best of” CD, Deluxe Edition.

Saffire–The Uppity Blues Women will tour together for the last time in 2009, to say goodbye to their fans. The new CD may be called Havin’ The Last Word, but you haven’t heard the last of Ann, Gaye and Andra; these three are far from hanging up their instruments, and each will continue to perform. The success of Saffire has opened up a whole new world of possibilities. “I feel blessed to have been a part of this wonderful, crazy ride. Saffire has been a life-changing experience for me. My view of music and the world has changed, and being a part of Saffire has opened so many doors for us individually,” says Andra. Ann has already begun making her plans. “I’ve had the opportunity to make music and travel with friends for 25 happy years. With Saffire, the group always came first, but after we retire the band I’ll be free to selfishly explore the blues. I plan to work solo and with as many different musicians and bands as I can.”

With Havin’ The Last Word, Saffire’s positive message of strength, joy, love and sisterhood through music will continue to reach all corners of the music loving world. And that’s saying a lot.

Postscript--Ann Rabson continued to perform until her death in 2013. Gaye Adegbalola and Andra Faye have both released their own recordings in the last few years, and both perform often. Gaye is still based in Virginia; Andra returned to her home state of Indiana.

Ann Rabson was born in New York and grew up in Ohio. As a child she fell in love with the blues and began studying guitar. At the age of 18, she began her career as a professional blues artist. In 1971, Ann moved herself and her young daughter to Fredericksburg, Virginia where she eked out a living as a musician. Needing extra cash, in 1978 she took a day job as a computer analyst while continuing to perform at night. By the early 1980s, Ann was concentrating on piano and decided to return to a full-time music career. Shortly after, Saffire was born, and the accolades began to roll in. Ann has been nominated eight times for a Blues Music Award in the “Traditional Blues–Female Artist Of The Year” category. She was also a nominee for “Piano Player Of The Year.” Her first solo album, Music Makin’ Mama, was nominated as “Album Of The Year” in both the Traditional Blues and Acoustic Blues categories, and her composition, Elevator Man, (from Hot Flash) was nominated as “Song Of The Year.” In addition, she has released two more solo albums, Struttin’ My Stuff and In A Family Way. Ann has appeared as a side musician on recordings for numerous artists, including Cephas & Wiggins, Pinetop Perkins, EG Kight and Ani DiFranco. According to DownBeat, “Rabson plays bluesy, honky-tonk piano with staggering authority.”

--Ann Rabson continued to play her joyful, infectious blues until her death in January 2013

Gaye Adegbalola was raised in a tight-knit Virginia family. She played flute while in high school and was chosen for the all-state band three years straight. She became a biochemical researcher and later an 8th grade science teacher (for which she was honored as “Virginia Teacher Of The Year” in 1982). After hours, Gaye and her father ran a theater-arts group, mixing music, politics and theater. Gaye first met Ann in the mid-1970s. “I followed Ann around for three years begging for guitar lessons,” recalls Gaye. “She finally agreed just to get rid of me.” As she became more accomplished on the guitar, Gaye devoted more of her time to solo performing. In 1984, Gaye and Ann formed a blues duo, and Saffire began to take form. In 1990, Gaye won a Blues Music Award for “Song Of The Year” for her composition, Middle-Aged Blues Boogie from Saffire’s self-titled debut. Her solo debut, 1999’s Bitter Sweet Blues, received unanimous praise from publications as diverse as Girlfriends and The Washington Post. In 2005 Gaye, along with pianist Roddy Barnes, released Neo Classic Blues as well as Blues Gone Black by Blue Mama Black Son (Gaye and her son, Juno). Her most recent release is 2008’s Gaye Without Shame. In addition to her solo, duo and band performances, Gaye is a lecturer and presents workshops on topics as varied as songwriting and vocal performance to civil and gay rights.

Andra Faye hails from Indianapolis, where she originally pursued a career as a registered nurse. She’s been playing music since the age of six, and has performed in a variety of eclectic bands. Andra was influenced early on by blues legends Howard Armstrong and Yank Rachell. When Ann and Gaye called on Andra to sit in on the BroadCasting sessions, she was shocked. “I was very nervous,” Andra recalls. “I kept suggesting other musicians. It was as if I found a winning lottery ticket in the street and tried to give it away.” Not only did she assist in the recording sessions, she joined the band as a full member in 1992. Her proficiency on bass, fiddle, mandolin, guitar and other instruments—not to mention her vibrant stage personality—helped Saffire become the force that they are today. She was nominated for Blues Music Awards in 2004 and 2005 in the “Blues Instrumentalist” category for her skills on mandolin and violin. In addition to performing with Saffire, Faye performs with The Mighty Good Men (with whom she released her 2005 solo recording, Walkin’ Home To You) as well as numerous musicians, both local and national. She also teaches privately and for workshops. “It’s still amazing that I get to do what I dreamed about,” she says. “I guess sometimes dreams do come true.” 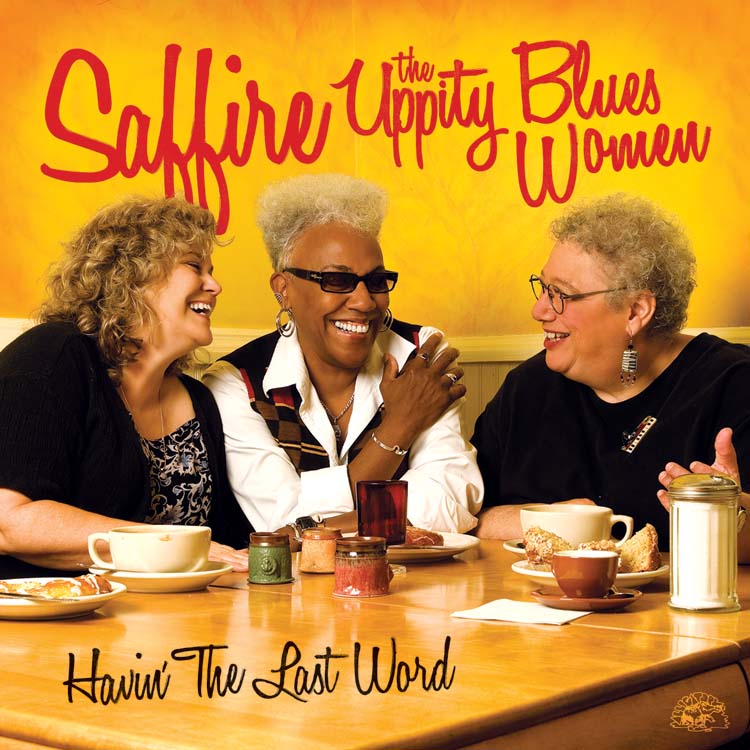 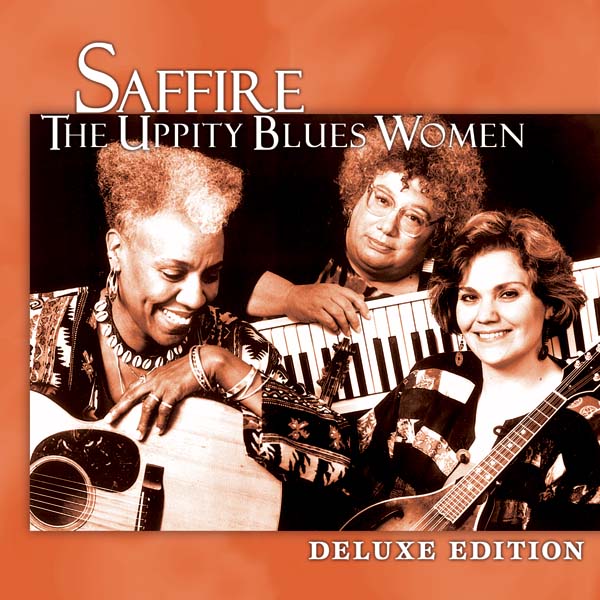 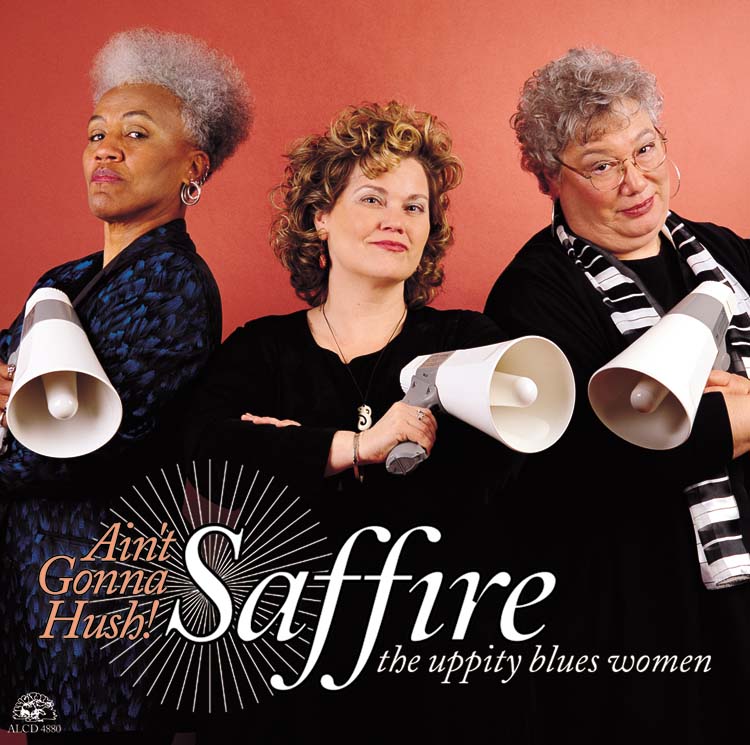 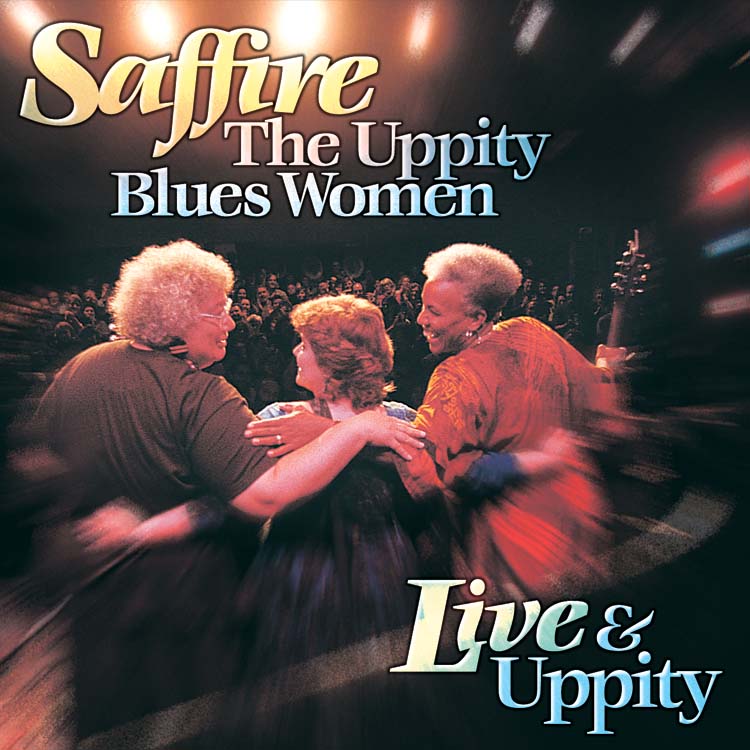 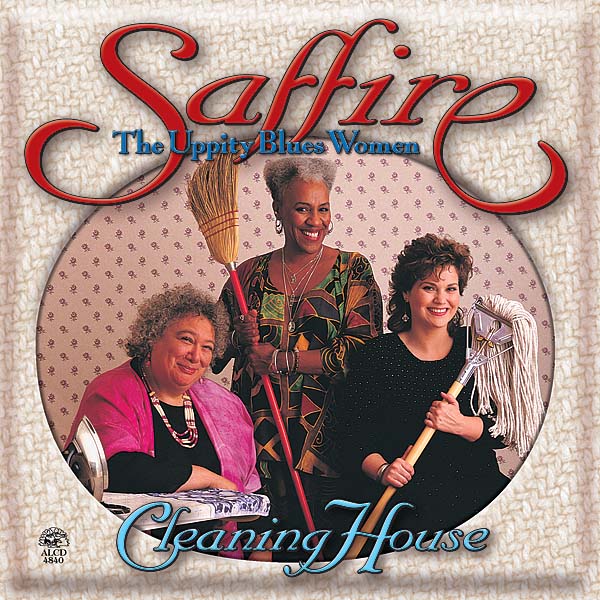 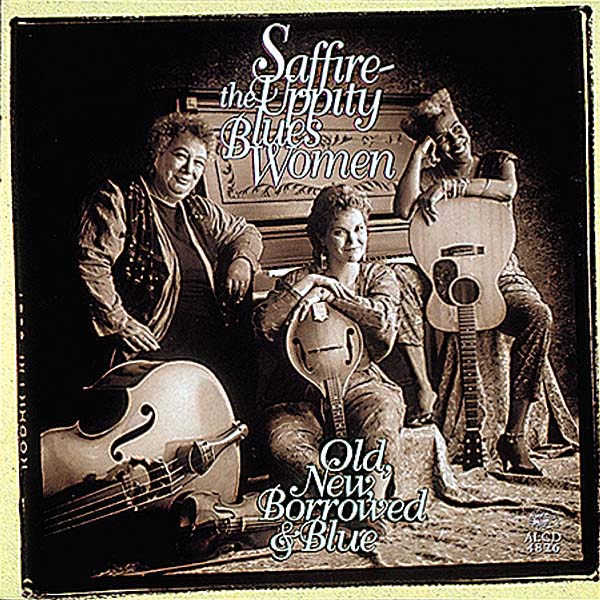 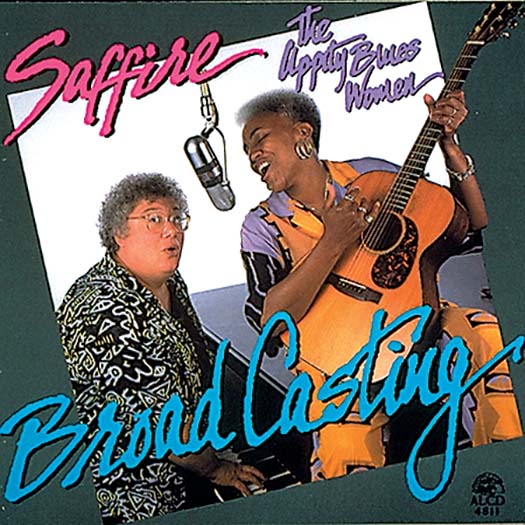 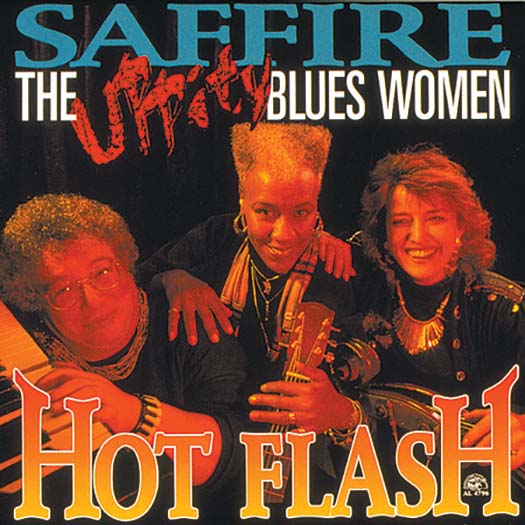 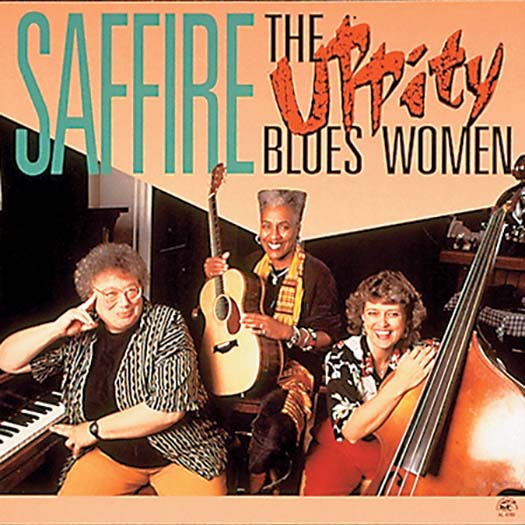